A few days ago, our prime minister insisted on TV that Malta had the highest vaccination rate in the world. It doesn’t. We’re not doing too badly but he spoils that with vacant hyperbole.

Yesterday, at an umpteenth gala event to “launch” roads that have been in use for months and have already been “inaugurated” multiple times, the prime minister said he was looking forward to the end of the pandemic so the rest of the world can gawp in awe at the Marsa spaghetti junction.

Here’s the quote from The Malta Independent:

“When the pandemic is over, he added, the rest of the world will be impressed upon seeing the Marsa junction in person because it will show that Malta is a serious global contender in the infrastructure industry.”

The Marsa spaghetti junction is the most complex road intersection in Malta no doubt. The prime minister might feel entitled to inaugurate it one more time with another in a series of several spectacular launches. The sweeping drone shots, soaring music and blinding searchlights would be appropriate for an opening ceremony of Olympic Games. But a series of roads is all Robert Abela has so we’re going to have the spectacle anyway.

You can dismiss this need for self-praise as a pathetic character trait. Maybe he gets his wife to uncork champagne and sing his praises every time he ejaculates. But that would be her problem.

His multiple “launching” extravaganzas are charged to our expense. Perhaps the standards commissioner can start thinking about the logical connection between Carmelo Abela’s pointless vanity trips on newspaper pages paid by the State and the enormous cost of these light and sound spectacles that amount to little more than extremely expensive ego trips.

Whatever Robert Abela imagines he is “launching” this is not the Sydney metro, it’s not the Asian Belt Road, it’s not the Lagos-Kano railway in Nigeria, it’s not the California High Speed Rail, or the Colombian 4G road network.

As spaghetti junctions go, Marsa is dwarfed many times over by the M4-M7 junction in Sydney, the State Circuit in Canberra, the Swindon Magic Roundabout, the Putrajaya in Malaysia, or the Pregerson Interchange in Los Angeles.

Incidentally, spaghetti junctions are no longer heralded as civilising achievements in the rest of the world. They are an evil that recognises the failure of under-developed cities to restrain dependence on car travel and to guarantee mobility to people and efficiency for economic activities using sustainable means of transport that do not require chunks of the landscape to be turned into concrete pillars and flying roads.

Robert Abela seems to recognise this when he hails the Marsa junction as a project for “less traffic” and “more trees”. The logic is almost comical. Nothing in bigger, wider, faster roads amounts to less traffic. If he means less traffic congestion on the spot where the flyover has replaced traffic lights or a roundabout, he’s obviously right. But there’s no less traffic for that. If anything, there’ll soon be more traffic as less travellers give up on using their car to make the journey.

As for the planting of trees, the less said the better. I will leave here an image that Infrastructure Malta proudly sports on its website to promote the junction with the question as to whether any one of those congratulating themselves yesterday would let their daughters or their sons use the bike to travel from Paola to Valletta through the verdant and oddly carpeted lanes of Marsa. 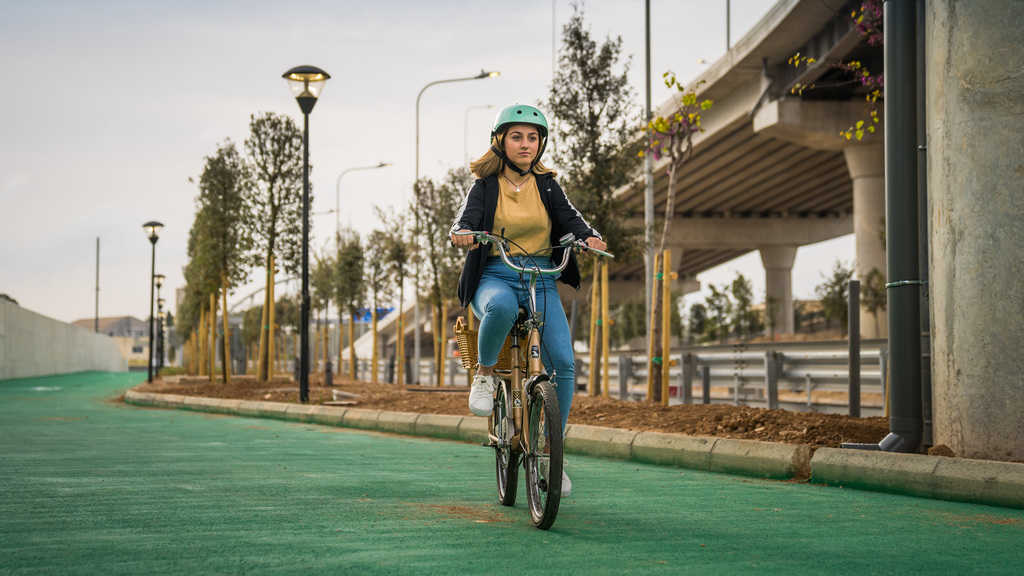 The Marsa junction needed to be done and for our scale it’s a large intervention. But it’s no miracle of engineering. The rest of the world will not notice it.

A jumble of roads is the last reason for people to break their covid-imposed fast and travel to a holiday destination. No one is going to be amazed at how high we build our fly-overs, how fast we drive our cars, and how brightly lit and loudly sung the praises our prime minister showers upon himself. There are higher roads, faster cars and more delusional political leaders in uncounted places in the rest of the world.

People would leave their own cities to fly to the Mediterranean to enjoy its pristine beauty, the charm of its history-peppered living, the breathing antiquity of its culture and its architecture. Yesterday was another reminder they will need to look elsewhere for much of that.

Previous:GUEST POST: The fall of the ‘moviment’
Next:Join tonight’s online vigil to mark 42 months since Daphne Caruana Galizia was assassinated