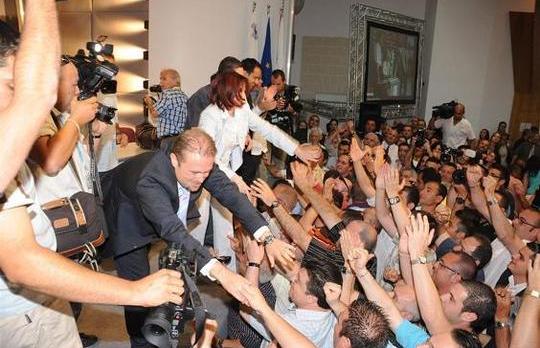 It had been since 2008 that Joseph Muscat, the man crowned as the most corrupt in the world, had started to make plans to build his empire. The 4th floor buzzed like a beehive. The chosen elite was working hard, preparing the roadmap. It would lead them all from rags to riches at the expense of their fellow countrymen. By 2013 they were ready, all plans in place.

Winning the election was child’s play. The Nationalist Party was tired, weak and broke, unlike Labour for whom money was no problem. Ask Anġlu Farrugia. He knows something about that. Its electoral campaign was cutting edge material, people were duped while all those who could potentially harm the ‘moviment’ were bought and dropped clanking into Joseph Muscat’s pocket. Labour cruised to the biggest victory ever.

Within days, the plan was already being implemented. Friends and donors were handed millions and offshore companies were already in place. Like leeches, they sucked the blood out of Malta to leave it as weak as a plastic bag in a strong wind. Millions, maybe billions, exchanged hands in an unprecedented corruption exercise. Malta’s till would clink to the sound of imported workers on minimum wages (often less than that) and to the selling of the Maltese and European citizenship. Otherwise, there was barely any FDI to speak of. They tried Blockchain. That fell flat on its face within a year.

The empty promises, the hype and that the costly but hollow media events were exposed for the smokescreens they had been. In the words of Leonard Cohen, “Everybody knows the fight was fixed. The poor stay poor, the rich get rich. That’s how it goes. Everybody knows.”

But, even though a number of architects were involved in the planning they missed one important thing. They had built, like the biblical fool, their house on sand rather than on solid rock. Their only aim was to get rich as fast as they could and so they planned for the short term. As the kink had promised, he would leave after two terms. Joseph ordered the cracks painted over and hidden. But they were there.

Malta’s reputation is now in tatters. The stench was exposed by the assassination of a journalist who was uncovering it.

With a national debt standing at €8 billion, Ian Borg builds unsightly and expensive bridges nobody use. But as the national fund burns out, some don’t know what to do with all the cash. One of them, famously, the face of Labour’s 2013 campaign. “I’m sorry dad, no I’m not ta. I’m voting Labour.” She’s now charged with money laundering. No wonder she wanted the Nationalists gone.

At the end of 2019, thanks to civil society, the movement came crumbling down with the ‘emperor’ and his knights in armour resigning. Some, but too few, were arraigned in court. Many are still as free as birds not flying over Miżieb or l-Aħrax.

Yet, and this is why this rock never ceases to amaze me, according to the latest surveys the PL is still leading with healthy numbers in the polls. They lost some ground but that’s not happening fast enough. Robert Abela will call an early election before the haemorrhaging becomes a threat.

It is now up to the Nationalist Party to emerge as an alternative government. Not trying to win because of Labour shortcomings and deficiencies but with solid new policies and proposals. The PN should also ask a number of older MPs to give up their candidacy and come up with fresh new young faces. The future beckons.

Previous:GUEST POST: The free press is switching off in Europe and Malta isn’t immune
Next:The best spaghetti junction in the world