You must return here with a shrubbery

Carmelo Abela is defending himself for full-page adverts taken out in newspapers last year. Half the advert amounted to a picture of himself. The other half was made of vague and empty slogans. The intent was clear: improve his profile and PR. The cost was paid by taxpayers because he’s a government minister.

Carmelo Abela’s defense, if you want to call it that, is on two levels. First, that it is his duty to inform the public of the work he is doing. He doesn’t finish that syllogism so I will. If all he has to show for himself is vague slogans and nothing concrete, that’s all he’s going to be able to put in his adverts.

And the second level is that there are no guidelines to clarify the intention of the law that Ministers don’t spend your money on their personal propaganda. Because you see when you teach your kids not to use crayons on the walls of the house, their defense could be that you never told them not to use poster paint.

Carmelo Abela was the subject of this investigation because he precociously anticipated the general election and Repubblika filed a complaint with the standards czar in the hope that we don’t go to a general election with a huge bill paid for this waste of tax-payers money.

It’s not going to work.

Yesterday’s it-Torċa has Roderick Galdes. In what must have been a superhuman effort of modesty, his self-portrait takes up a quarter instead of half of a full-page advert, though the proportion of his physical appearance on the page is not dissimilar to Carmelo Abela’s. 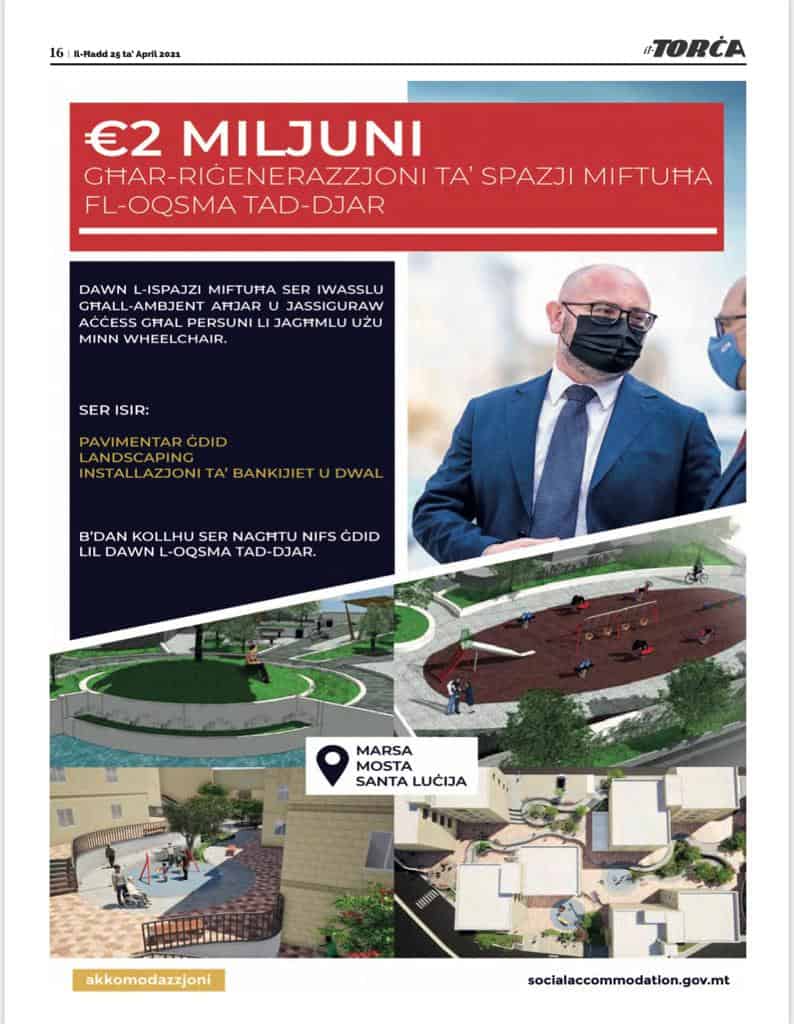 The slogans are a bit less vague than Carmelo Abela’s but they do not amount to informing the public what he has done. They amount to promises of what he intends to do. We are then regaled with SimCity graphics circa 1991 of concrete paving, generic shrubbery that could have been commissioned by the Knights of Ni, and swings and a slide straight of the clipart section of Microsoft Encarta.

These are planned improvements for the common areas of social housing tenements. If these drawings promise an improvement, I can’t begin to imagine the horror there is now. Roderick Galdes also promises wheelchair accessibility, which is strange given the steps that feature in at least one of the pictures. To be fair another picture shows a graphical representation of someone being pushed in a wheelchair like an invalid taken out to go round in a 12-meter circle, kept at a safe distance from marauding trees.

This is what you pay for.

Roderick Galdes says he has a €2 million budget to lay these tiles and the first money he spends from that budget is to take out an advert to tell you about it.