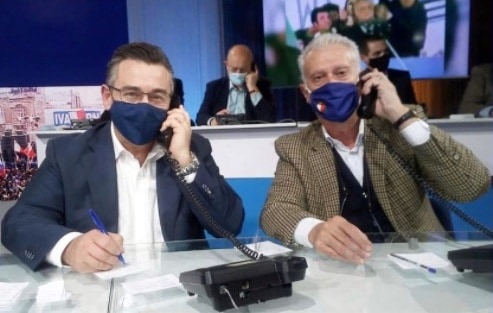 I’m in no mood to be defending Bernard Grech. He doesn’t seem willing or able to do it himself in any case. The more time passes the less effective he seems to be. By now he should really be showing some signs of a possible turnaround and I’m either blind or there aren’t any.

I’ve been trying to ignore them looking away as one does when uncles you only see at weddings have too much to drink and bring up at the most inappropriate moments old quarrels no one cares about.

Robert Arrigo is making himself impossible to ignore, crying at his own funeral on his last day as party deputy leader, mourning the futility of his time in politics, weeping at the loss of some future only he seemed to expect.

Robert Arrigo has been a persistent annoyance, a hidden growth in the PN’s folds of fat for decades. As he delivered his own eulogy, he lamented he was only ever appreciated for his ability to bring money to the party. That’s not quite fair. He had one other major quality which his party could not wean itself from. He was popular and respected in his community which made him a vote magnet. Political parties need vote magnets almost as much as they need political visionaries and capable administrators. Often political parties make the mistake of thinking they need the magnets more than the visionaries or the administrators.

He was “allowed” to contest the election much later than he had asked to be. There were many reasons to keep him at bay.

In policy terms he only ever seemed interested in the tourism industry. He may be an expert in the subject, but he also holds a personal stake in it. He never quite understood it but the fact that he was a player in the industry should have disqualified him from drawing up policy on it in the political fray, let alone present himself as the PN’s candidate for the tourism ministry. The PN was wrong every time it gave in to his pressure and put him in charge of that brief.

In terms of integrity and reputation he was inevitably darkened by the same shadow of people deeply involved in the Maltese professional football game. People who are reasonably close to the sport will tell you that it is nearly impossible to enjoy any success in the game without any form of corruption. There was a time when that was a reason to avoid as much as possible cross-fertilisation between premier league football and front-line politics. And then there was a time when Adrian Delia came from Birkirkara FC to become party leader.

Robert Arrigo is often praised, mostly fairly, for his sense of commitment and service to the party, for the hours he put in, for the money he brought home, for the bullets he took for the team. But like most of his generation you will struggle to remember him for any actual policy initiative of any material substance, any programmatic idea that could have pushed forward the national debate.

He behaved as if he saw the importance of rank in the party as an appropriate reward for the work that he did. This is entitlement, but not in an ancien regime, lazy, claim by breeding and background sort of way. His was a middle-class entitlement, the claim of a hard-working entrepreneur, who expects prestige and respect as just reward for doing what he does best, stay up late and make money.

This is why Robert Arrigo was so often perplexed when his business success and his football success, not to mention his resounding success at the ballot box, did not automatically result in prestigious political positions and in muted, reverent respect in others less wealthy and less successful than him.

This is why he wept at the end of his political road last week when he was replaced as party deputy leader because all those private battles, all that bickering and bitching, all the back-stabbing, all the melodramatic protestations of party loyalty, all the denouncements of others as traitors, have ultimately given him nothing, not anything like the prestige and the glory he expected would fall in his lap by right anyway.

And now he’s taking a page from the book he believed was written by all the people he believed betrayed his entitlement to political glory by pissing in the pool of stagnant water out of which he’s just been kicked.

It’s all so tragic, but it’s also so boring. If you put aside the shadow of whatever he may have done to secure premiership titles for his old football team, the man, within the limits of his undoubted talents, could now be basking in the gratitude for a valid contribution to public life in Malta. Not everyone can, or would ever even be inclined, to articulate complex policy programs or even a broad stroke vision for the country. And if all people working in a party only ever articulated policies, there would be no one organising it enough to pay salaries and fund campaigning.

That’s a big part of being grown up, what certain economists call division of labour and certain other economists call exploiting one’s comparative advantage. There’s no “right” to prominence in politics. There’s a duty to serve to the best of one’s ability and the only reward that can be hoped for is the team’s success and the country’s common good.

Watching Robert Arrigo drip dripping his toxic stream on the party he professed to love so many times, you wonder if “duty” was a thought that ever occurred to him.

Perhaps his undignified outbursts are one of the best illustrations yet of young people’s standing complaint about politics: are these the men (for it is the men who behave like this) that they’re supposed to look up to?