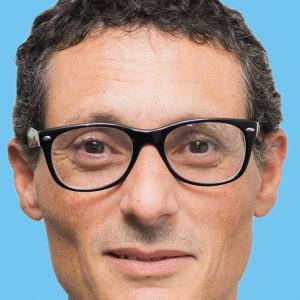 Kevin Cassar, formerly a general election candidate for the PN, is now an ex-PN member. He resigned in a letter to Assistant General Secretary Jean Pierre Debono made public by Cassar on Facebook.

The usual wise guys reacted with a smug “Kevin who?”

There is a general attitude from the Adrian Delia loyalists in the PN that the process of seeing people leave the party is a cleansing purge. This is auto-pruning of those who were not really Nationalist to begin with. Adrian Delia’s arrival has forced down the masks of the traitors in our midst who are walking off the edge before they are pushed off.

Nothing could be more short-sighted. Kevin Cassar is representative of a small group of people recruited to politics in the last few years because of their disgust at the rot and corruption in the Labour government. The PN promised a clean, honest alternative. A “decent” alternative as Kevin Cassar eloquently defined it in his speech at the opening of the PN convention that would go on to elect Adrian Delia as leader.

‘Decency’ is an almost British understatement. It is the least you should expect from anyone, let alone politicians. Kevin Cassar rightly heralded that as a contrast between the PN and Joseph Muscat’s government.

But in that speech, that should be watched again by those who think that smart and clear delivery of complex political arguments is the exclusive purview of lawyers, Kevin Cassar was firing his last, desperate warning shot.

He had put his name and reputation on the PN’s list because he saw it as the last bulwark of decency. If it lost that decency, he would go.

And go he did.

I disagree with him for his decision. Not because I am not as concerned with his reservations about the direction the PN has taken as he is but precisely because I am.

The PN did not start last 2nd September, although reading some people’s comments over the last 7 days you would think that anything before that date was cold, dark, hostile and wrong. The PN has a 140 years of history. It is a massive political legacy that has on occasion taken wrong turns.

Another 7 days have gone by since Adrian Delia came on the scene and a number of substantial questions put to him since last June remain poorly answered or not answered at all. The methods applied for the only item on the agenda of his first week in office – his route to a parliamentary seat – do not fill the doubters with encouragement. More of that later.

But even so, leaving the party is a cop-out in these circumstances. I have reflected on Kevin Cassar’s decision as if I had to take it myself. I have no party office to resign from: merely my membership. And yet I have considered whether my dissatisfaction should simply be mollified by cutting off ties.

It may yet come to do that. But it is not what I want to do. I want to know if there are like-minded people within the PN who will hold it to its principles, its culture, its politics as I knew them, its ethics and its traditions. Kevin Cassar has just forfeited his vote in the upcoming elections for the executive committee, for the deputy leaders, for the party officials. I shouldn’t like to abdicate my responsibility to contribute to that choice.

The PN has a democratic system of internal checks and balances and distribution of power precisely because the designers of our rules – Ugo Mifsud Bonnici, Ċensu Tabone, Guido de Marco and Eddie Fenech Adami – never wanted a PN where its leader, however elected, would be the sole authority in the party.

They had just staked their reputations and their careers on bringing about the conclusion of Ġorġ Borg Olivier’s hard grip on the helm. They knew better than to anoint his successors with papal infallibility.

People have been misusing the maxim that no one is greater than the party to try to construe it to mean that no one should come in the way of the exercise of the leader’s will. That oft misunderstood principle means the opposite. No one, not even the party leader, can alone take the party away from where it is meant to be.

I would not like Kevin Cassar’s example followed by others. The PN remains a political asset that cannot be thrown away so casually like a trifle. There is no guaranteed immortality for any political party. The Democrazia Cristiana, PASOK, the French Socialists: there are many examples of parties who seemed destined to political long-lived supremacy ended up vanishing from the scene. There is no way to be sure this is the fate of the PN. There is no way to be sure it is not.

But for people who hold the values of honest, clean, inclusive, compassionate, European politics, we cannot just quit and walk away from the only home we know when the alternative is the amoral rot of the Labour party.

If the new PN leadership has given up on Kevin Cassar and people like him it should really assess whether their political program is in any way viable. For how many more people can the PN afford to lose?

Many times I sang along to the PN anthem with gusto at many a party conference and street meeting. I felt warm and welcome in the totems of the party not because I need any, but because they were reminders of the politics of the PN and what attracted me to it.

But I heard Adrian Delia throw at me the words “ta’ kattoliċi u ta’ latini” at that last Independence Day mass meeting 3 days ago as an entry requirement dug up from deep historical recesses long deemed irrelevant.

Why would the PN choose identity politics now? Why would the invented traditions coined up by the anti-colonial elites of the pre-war years now become political issues again, rather than quaint residues and anachronistic symbols?

Shouting kattoliċi and latini in the 1920s was telling the British they were aliens here. Fair enough if that’s what it took to push them out. But if to belong to the PN one has to be kattoliku u latin, I’m ruled out because I’m neither. I’m an atheist of semitic stock twice married to foreigners. Does the PN no longer mean to represent me?

The loyalists will say I am nit-picking. Perhaps I am. But it seems to me that when starting at such a numerical disadvantage the PN should be doing its best to include, not exclude: to retain the people who were attracted to it up to the last election as it seeks to bring on board others. Not to start drawing up definitions that exclude people long within its fold.

And the burden is on the new leadership to do this. I speak firstly of Adrian Delia but also of those closest to him. As they appeal and put pressure on sceptics and critics to fall in line and bow their heads to the authority of the elected leadership, they ought to lead by example.

This last week we witnessed incredibly divisive politics as the new leader sought his place in Parliament. Though the congratulations to Jean Pierre Debono have been effusive since he announced he was giving up his seat this morning, it is clear to one and all that he had no intention of leaving.

If he had been the “plan” promised by Adrian Delia before his election, this would have been dispensed with long ago: at the latest last Wednesday at the Indipendenza activities in Floriana.

Instead the leadership appeared to be making the rounds to have vacated a seat it considered less valuable than that of an important ally like Jean Pierre Debono. They tried Maria Deguara. She said no. They tried Ivan Bartolo, and the undenied reports they promised him an income to compensate for his resignation show they were trying even too hard. He said no. They tried Frederick Azzopardi. And it would appear he said no too.

At one point one of Adrian Delia’s closest allies, Hermann Schiavone, went on Facebook to say he would resign if only the failed candidates on his district promised not to replace him. It was kite flying of the first order. In The Sunday Times today, Norman Vella, Hermann Schiavone’s most likely successor if Hermann Schiavone were to resign, shockingly revealed he was never even spoken to by anyone in the party about what he would do or ought to do if he found himself an MP. 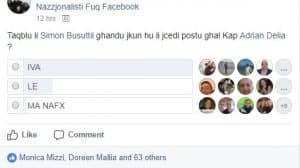 To add to the doubts about Hermann Schiavone’s sincerity, at around the same time he declares he is ready to fall on his sword, he also votes in a straw poll on Facebook demanding Simon Busuttil’s resignation to make way for Adrian Delia. (His vote is fourth in line replying IVA to the question whether Simon Busuttil should be the one to give up his seat to Adrian Delia). And to think it was Simon Busuttil who brought Hermann Schiavone back on the list of PN candidates after he was struck off for never fully explained reasons by the Lawrence Gonzi leadership.

Because that was the elephant in the room, was it not? While Adrian Delia’s hired men visited MPs they thought they could ‘persuade’ to leave, the real question was when he would ask Simon Busuttil to bow out. As it turned out it was easier for Jean Pierre Debono to walk away than to make Simon Busuttil move.

Simon Busuttil is not a rallying point for the sceptics and the cynics, certainly not within the parliamentary group.

But he is a reminder that walking away from the PN right now is easy, too easy. And the easy thing to do is not the right thing to do.