The following is my article first published in the current issue of Money. It was written before the assassination of Daphne Caruana Galizia:

To imagine that a significant and particularly sensitive industry like financial services can exist in a jurisdiction completely indifferent to the political context in which it must operate is unforgivably naïve. Financial services thrive in an environment where words like ‘trust’, ‘confidence’, ‘stability’ and ‘consistency’ can be mouthed without irony.

We have seen that as Malta built its financial services industry on the back of its transformation from an iron curtain satellite of Libya, to an off-shore maverick on to a European Union member state that met ahead of time the strict criteria of euro adoption.

That transformative process was a political program. It was driven by a political class intent on achieving more than treaties and legislation. They needed to shake-up the economic foundations of the country and re-invent its culture and work ethic.

Malta of 1987 would have been a grossly unsuitable destination for financial services. Malta of 2003 was only just coming on the world stage. A political program enabled the industry’s growth. And a political program – or a lack of one – might just as well bring about its downfall.

Even as they put on a brave face and paper over the cracks, local service providers are deeply concerned about the changing attitude of target clients that are nowhere near as enthusiastic as their predecessors were up to a couple of years ago. Intermediaries’ questions are becoming tougher. Diligence exercises are going deeper than what would normally be thought as due. Alternatives that unsuccessfully competed with Malta’s offer are being considered more favourably.

The pipeline has not dried up but the flow through it is showing worrying signs that should be concentrating minds on causes and how to address them.

Except that the concentration of minds quickly points to fundamental causes that are seemingly beyond repair.

Malta’s Chief Justice in a speech from his throne this year diagnosed the deep-seated illness of rule of law in Malta.

The matter has been on the national agenda for some time but up to now it has been a matter of political controversy. It was the main them of the June 2017 general elections which however did not elect the PN who clamoured for the reinstitution of the rule of law but rather the incumbent PL that ignored the issue.

The subsequent takeover of the PN by a Trump-like outsider relegated issues of good governance from the top of the PN’s agenda and since the PN was really the only party speaking about the matter, the political class appears to have lost interest in putting pressure on the corrupt, let alone prosecute them.

The Chief Justice spoke of a culture of impunity and pointed at the complicit inactivity of the police and the attorney general. It is stunning enough that he had to say it. What is more stunning is the almost universal indifference to his remarks.

And of course the fact that evidence of Panama companies set up for senior ministers and aides upon entering office and inexplicable transactions with the Azerbaijan government have all but quit the local political discourse is cultural evidence of that impunity.

On a parallel rail, the Archbishop of Malta recently spoke of the formation of an oligarchy that sits on concentrated wealth as ever greater numbers fall into poverty and hardship. Huge economic disparities were virtually unknown in post-war Malta. But a combination of aggressive concentration of property in the hands of a favoured land-owning class and a virtual freeze on public sector infrastructural and social developments have created an economy with the right indicators of public sector surplus and full employment but with economic fundamentals that are creating inherent disaffection and uncertainty.

Ninety thousand people, one in five of the population, are at best at risk of poverty if not well and truly trapped in it. For a small island city state that is supposed to be experiencing its greatest ever economic boom that is a staggering statistic.

The concentration of wealth in a landed class has also unleashed an unstoppable enthusiasm for property development apparently free of any town-planning particularly with respect to density, allowance for open space and proper provision for mobility and transportation. Development also appears to be entirely divorced from any sound projection of demand and a realistic forecast of what the indigenous population can reasonably be expected to afford.

All these factors, persistently ignored by a political agenda inebriated by quick wins and as is alleged corrupted by personal and illicit motivations, combine to sully the sheen on Malta’s offer to a financial industry that looks for stable and attractive jurisdictions for its business.

To imagine that just because the majority of the voting population is ambivalent about crumbling rule of law, increased economic inequalities and a degraded environment, these factors are also ignored by people looking for financial service centres is both obtuse and utterly, utterly mistaken.

Banks and pension funds are particularly sensitive to reputational risks particularly in a time of increased pressures from governments of jurisdictions these funds typically fly out of. Their analysts will be assessing the prospects of economic sustainability for their destination investment country and therefore the prospect that an investment location might very well be forced to resort to increased fiscal revenues from their activities.

In this context, one central concern is that the Maltese authorities will find it ever harder to resist EU pressures to harmonise tax rules and reduce fiscal gaps within the single market. Without moral authority, the naturally handicapped political clout of the Maltese, already bereft of Britain’s friendship – their traditional ally in the EU – will continue to suffer.

No one wants to be around if Malta ever faces the cataclysmic collapse experienced by Cyprus a few years back. If the perception of a risk of this scale gathers ground the current slowdown in growth will be remembered with fond nostalgia.

Being the harbinger of bad news is an unpopular activity in a country where politics appears to only really make any headway if it drinks the Kool-Aid and celebrates the drunken glories of the here and now. The former leaders of the PN know this full well. It is easy to retort that there has been no marked exodus of the financial services industry from Malta and news of its demise is groundless and premature.

But one must remember that every single financial services client has no real exit cost if they decide it is time for them to leave. They just fold their laptop and off they go. This is a consummation no one wishes for but unless the political community recognises we have a problem, wishing it away will not fix things. 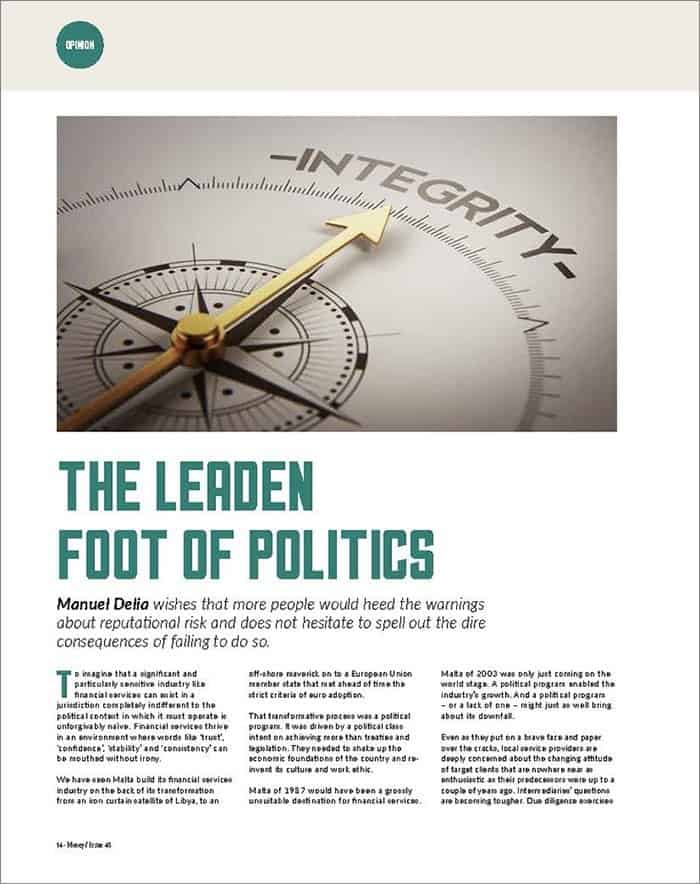 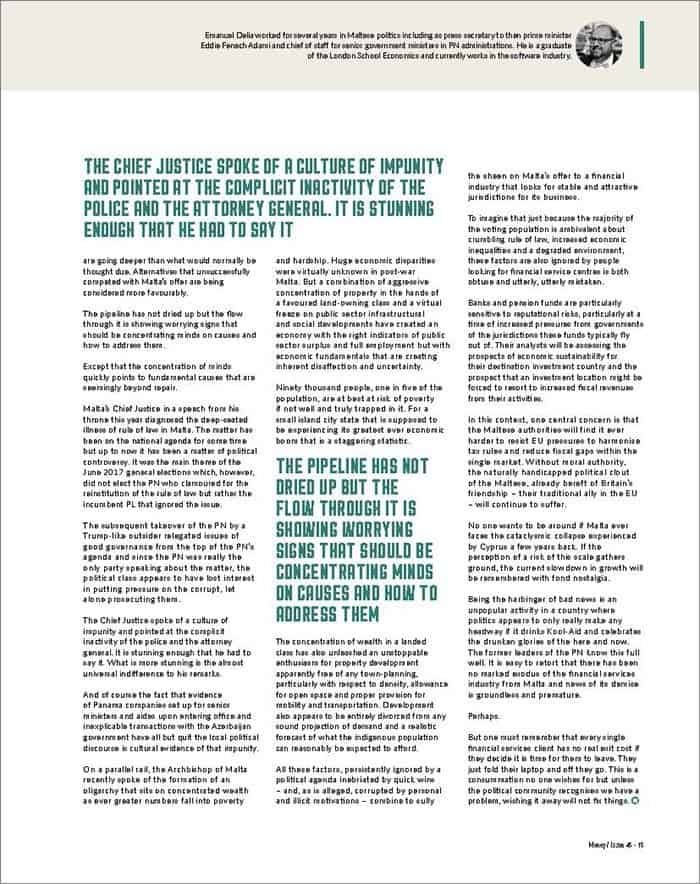 Previous:The reform we do not need
Next:GUEST POST: On the FIAU’s findings into Adrian Hillman