Requiem for a dream

The findings of the Malta Today survey need many a spoonful of sugar to go down the throat of anyone who wants the present government kept in check. Its excesses went uncontrolled when it was opposed by a principled opposition with a remote chance of damaging it in the polls. It has now been replaced by an opposition that appears unwilling to properly resist government misconduct and that has a higher statistical probability of becoming a third party than replacing Labour as first. 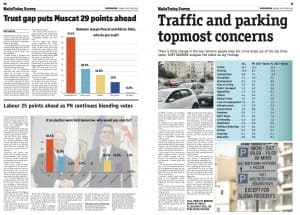 Within hours of Adrian Delia’s election to the leadership, the PN celebrated a wave of 600 new members signed up to the party. Champagne was not uncorked because of the very welcome 6,000 euro a year. It was the only evidence available to argue that Adrian Delia was already proving a magnet of support, a force that will bring about the recovery of the PN. The old way was the losing way. Here at last was evidence the way would change.

Perhaps if they wanted to project reasonable optimism they should have anticipated a hockey stick growth: a small short-term dip while the new leadership settled in and all the party rallied and a quick rise to glory to look forward to right after.

But the new strategists at PN HQ did not let on if their plans anticipated a temporary initial dip.

More than twice as many respondents to the Malta Today survey said they would vote Labour now than those who said would vote PN. I have not checked all the gloomy surveys of the last 9 years to verify but I think this is a record low.

Just shy of half the respondents who voted PN in the last election do not trust Adrian Delia. That figure is approximately representative of the share of the vote secured by him in the leadership election. If party members are to be considered statistically representative of party voters (and that seems like a sound extrapolation), Adrian Delia has between election and survey made no headway with the Nationalists who did not support him at the outset.

This is no reason for Adrian Delia and his team to throw in the towel. Even if it was, they would not, so it is quite pointless to even contemplate the scenario.

They would have been spending every day since June 5th working out how to win the next election; how to bring people back. Their ‘new way’ will have been designed to achieve just that. It was certainly explained that way. And one would have to imagine this is a plan with long-term returns.

Though if there is a strategy, it is a courageous and risky one indeed that does not expect to gain some sort of burst of momentum in the honeymoon just after victory at election. 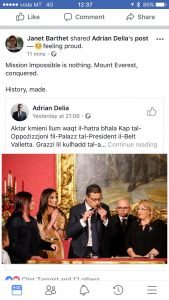 There are hints some thrust forward was expected. Adrian Delia’s wife today told The Malta Independent she felt ‘vindicated’ by Adrian Delia’s victory. His assistant dubbed Adrian Delia’s swearing in as Opposition Leader as the making of history and the conquering of Everest.

It’s as if they think there is no higher mountain.

But reading today’s Malta Today surely they must think there is. A mountain no prior leader of the PN ever had to climb: the more than doubling of support than current levels within a four-year period.

The biggest chunk by far of that effort is actually recovering people who voted PN in the last election but at least in response to a survey caller have in their thousands said they would not do so again.

How is Adrian Delia bringing them back?

He has made some strange choices in the days which should have been his honeymoon.

He appears to have toned down to imperceptible levels his criticism of government. The PN has unbelievably remained silent on the case of Deborah Schembri and her engagement by a public authority she herself set up. Though some PN MPs criticised the government for this umpteenth episode of corruption and cronyism, the PN itself made no official statement suggesting with its silence it actually approves of this despicable behaviour. Even as the Deborah Schembri scandal got hotter, the PN’s silence froze harder.

In doing so the PN alienated – or failed to re-engage – with people who voted PN in the last election because they expect the PN to be more transparent and more honest than the government it is supposed to oppose.

Adrian Delia also appears to have neglected his political credo that on matters of conscience the party will step back to let MPs form their own views. When he did profess this philosophy he was riding on the back of the backlash Simon Busuttil was suffering for imposing a pro-same-sex marriage policy on his MPs, including the recalcitrant catholics.

In formally opposing the law removing discrimination against same-sex couples (lesbians obviously) obtaining special leave to use IVF where sperm donation is permitted, Adrian Delia firmly mobilised the PN in a frame of mind that appears to seek detachment from Simon Busuttil’s liberalism.

That is neither here nor there. The PN can make its own choices on matters of controversy and then seek to defend them with those who disagree with them. Nothing wrong there. But it appears the ‘new way’ is as indifferent to multiple views within party ranks on matters of conscience as it accused the older way to be.

Norman Vella is not alone in publicly arguing the PN’s position is pointless, morally doubtful and ineffective. Michael Briguglio endorsed his view publicly as well. These people clearly have not had an internal vehicle to express these views and have had to resort to an external controversy against the leadership of their party.

This is hardly the unified front that can possibly allow liberals who voted PN at the last election to see any point in continuing to support it.

Arriving an hour late to his own swearing-in may, for all I know, be for entirely innocent reasons. He has five children. Mobilising my own three to go anywhere is an ordeal. Then again there are as yet unconfirmed reports that at the time the President of Malta was expecting him in her chambers, Adrian Delia was shopping at The Point. Maybe he was not. But his arriving an hour late demonstrated contempt for institutions that is frankly spine chilling and utterly uncharacteristic of the PN leaders of my lifetime.

You may not be fan of the person of Marie Loise Coleiro Preca. But when the President stands, no one remain seated and you most definitely do not let her wait for you. Not if you have pride in your country and recognise its dignity in its symbols.

That sort of contempt for institutions reminded me of Joseph Muscat as leader of the opposition turning down invitations from The Palace publicly saying he would rather have burgers in a Sicilian lowdown. Refusing the President’s hospitality is rotten. Having a burger in Sicily is unforgivable.

In what book is the imitation of Joseph Muscat’s macho uncouthness, of spiteful contempt, of childish attention-seeking a winning electoral formula?

And in all this time Adrian Delia has still not clarified his personal tax and financial position. Today’s report in The Sunday Times shows the increasing frustration of the press with him. He should be swimming in the press’s good will right now. Journalists always love the new kid on the block. But this time they seem to be at their wit’s end on how to give the new PN leader a fair chance to find his feet and yet do their job properly.

The report says Times journalists spoke daily and repeatedly to PN communications officials reminding them they were looking for a clarification on Adrian Delia’s tax record. Adrian Delia knew full well this was an issue. A major issue. He left the publication of his accounts that revealed the information he had a tax bill the size of some people’s house, complemented with penalties for unspecified reasons, to the last few hours before the leadership election.

That ensured he got to what his PA calls the peak of Everest. But it only really got him to base-camp. Now he has four years of either clarifying satisfactorily his tax record or four years of trying to dodge the ever hotter guided missile that is the independent press that will follow him round every corner and down every ridge. And so it should. It’s their job.

His job is to explain why he should have penalties owed to the tax authorities and it is not enough to say they will be paid up by Christmas. Those who voted PN in the last election and told Malta Today they would not do so again will not be satisfied knowing the penalty was paid but being given an answer they can understand on why it was imposed in the first place.

Adrian Delia seems to be doing nothing to clear the air on this front either.

The Sunday Times’s editorial today mourns Maltese democracy. It has been dying of the same heart attack since 2013. Its institutions have been failing the citizens of this republic for all this time. The Sunday Times is the third of a series of national institutions — after the Archbishop and the Chief Justice — who this week made a set of interventions that will be recorded by historians as the warnings we ignored as we blindly walked into a political hegemony.

But The Sunday Times has remarked on an added complication that has now set in.

“Major question marks hang over the parliamentary Opposition too. Frail, fragmented, discredited, weighted by millstones of scandal, it has rapidly plummeted from what authority a higher moral ground confers.

“With unanswered questions about alleged money laundering of the proceeds of Soho white slave criminality, with lingering suspicions of electoral misdeeds, with precarious financial housekeeping skills, it takes faith to believe in the effectiveness and fighting spirit of the new PN leadership.

“What a moribund democracy, when the Opposition is shaping up to be the government’s dream-come-true.”