It takes a sportsman to teach dignity to politicians

Anyone who knows me knows I do not know the first thing about football. But I know enough to know that scoring a goal in a UEFA game is a moment of deserved pride and celebration.

Andre Schembri showed more dignity and national pride than our self-absorbed politicians when instead of thinking of himself, he thought of his country and restrained himself from celebrations. Instead of screaming his head off in celebration when he scored one of the most important goals of his career thus far, he bowed his head and stayed silent. Later he explained he did not think this was a week when celebration was appropriate given what has been happening in his country.

The self-importance of politicians lamenting how harsh Daphne Caruana Galizia was with them when she died, starting with the biggest ego-maniac of them all, Joseph Muscat, was the greatest embarrassment our nation suffered on the world stage. And we had many of those this week.

Watching the Prime Minister patronising and condescending the foremost journalist in the world, Christiane Amanpour, and speaking about how harshly he suffered at the hands of the woman who had just been blown up in a fireball under his watch, was a true national shame. It betrayed what our prime minister thinks of journalists, what he thinks of women, what he thinks of anyone challenging his power and might. To Christiane Amanpour he looked like one of so many tin-pot dictators she faces down for breakfast. 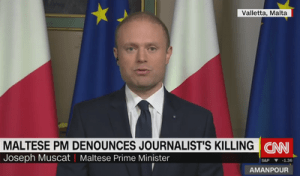 But Andre Schembri yesterday night, in his dignity, humility and complete altruism, was a glimmer of hope that outside our smug politicians, our greedy bankers, and all our mafia collaborators, we still have people who can tell right from wrong and stop short of indulging in little subtleties to attempt to explain away the muck and the slime around our necks.

Andre Schembri is captain of our national football team. The leader of his profession in the way the Chief Justice leads his. I turn to you, Andre Schembri, to ask your colleagues due to play in Malta’s football leagues this Sunday and on all other sportswomen and men to walk out of their fixtures.

The government would not call a day of national mourning because they can’t bring themselves to organise ceremony that would force them to stay out in the street without betraying their delight at having the foremost investigator of their foibles out of their way.

So Andre Schembri, and men and women of sports, whose profession and passion is based on values of fairness and equal opportunity, this nation turns its lonely eyes to you. Lead us where others would not. Tell your clubs and your federations you are downing your tools this Sunday.

Your place is not celebrating your victories this Sunday. Your place is in front of the people of Malta, examples of the youth, vigour, strength, pride, honesty and industry that we all fear we have completely lost to a mafia that has poisoned our nation’s soul.

This Sunday is no time for sports fixtures. Join us at the call-for-justice march this Sunday at City Gate at 4pm. We are out of people to look up to. Your nation needs you.