The story has today been confirmed when Fabrizio Miccoli was sentenced by the Palermo court to three and half years imprisonment having found him guilty of extortion. Here’s a report in La Gazzetta dello Sport of the court decision today. The conviction relates to an episode from 2011, when Fabrizio Miccoli played for Palermo. He was friendly with the son of Mafia boss Antonino “U Scintilluni” Kalsa and he got his friend to use Mafia contacts to recover a debt.

In 2013 Fabrizio Miccoli moved away from Palermo and after a two-year stint in Lecce, moved to Birkirkara FC for a short while.

Labour trolls are obviously having a field day with this.

A series of unconnected facts: (1) Adrian Delia’s presidency of Birkirkara FC. (2) The eventual conviction of one his players in a Mafia crime unconnected with his stay at Birkirkara. (3) The moniker of Mafia State in the context of the current moral and political crisis that has gripped the country. (4) Daphne Caruana Galizia’s coverage of the story. (5) Adrian Delia’s leadership of the PN. (6) Daphne Caruana Galizia’s death. And in the soup, Labour seeks political advantage because it finds absolution for its heinous crimes in the real vulnerabilities of its opposition.

This Miccoli story objectively has news interest. But there’s a wider context this week. If Labour thinks the weaknesses of its opposition could distract attention from the catastrophe it has to answer for, it had better think again. 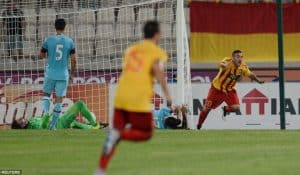