From that spring whence comfort seemed to come, discomfort swells.

This piece is not about Adrian Delia’s politics or about his charismatic nature. Nor is it about the opinions of his wife. It is not about their public behaviour. And it is not a criticism of their choices. 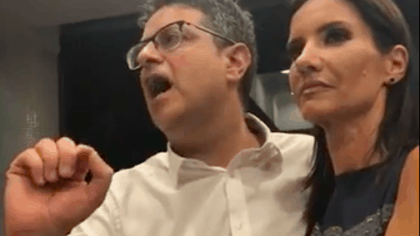 This piece is about a subject I think generally speaking should not concern journalists and should not be written about. Even politicians are entitled to their private life. Their children are entitled to privacy. They should be allowed to have their periodic domestics at home without the prying eyes of the world that cast heat on the rest of their lives.

I suppose you could criticise Nickie Vella de Fremeaux about a million aspects of her very long interview with Lovin Malta. (This classic ’13 reasons why’  summary is gives you the idea). But you cannot criticise her for reading from a script, for being too rigid with message or for sounding artificial.

There is of course another extreme to the classical packaging that well groomed politician couples present.

By Nickie Vella de Fremeaux’s account we have everything but a political partnership. She does not support her husband’s political choices, particularly the first political choice he really ever took: that of running for party leader of the PN on a path to be prime minister. She is very openly concerned about the effect her husband’s career choices are having and will have on her and on their children. She is not looking forward to being Mrs Prime Minister at all.

She does not discuss her husband’s politics with him at least not in the pillow talk sense you’d expect. Instead she will disagree with him on line like you or I would.

What we are seeing here is a very public expression of tension on the home front. It is in no way abnormal for couples to experience this. Nor is it destined to end in acrimony. Nor does it reflect badly in any way on Adrian Delia or Nickie Vella de Fremeaux.

The interview however does not look like it’s going to make the resolutions of these issues any easier. Husbands may complain to their wives about their career choices and a wife complaining her husband is too career focused to give enough time to the children is almost a cliche. But the natural stress of those tensions would surely be harder if loaded by a long on line interview, a public confession, and the inevitable comment and scrutiny that follows.

Ultimately a party leader can hardly expect to get widespread approval when his wife publicly withholds it. It is comforting she thinks “his heart is in the right place”. For some that is a matter of controversy but it would be positively devastating if she didn’t think so.

But he needs to have more than his heart in the right place. He needs to have his heart in it. And it would help if hers was too. She tells Lovin Malta it “bothered her ‘immensely’ when people refer to her as the wife of the Opposition leader, rather than as a person and professional in her own right”.

She appears to be very uncomfortable in that role. And sincere as no doubt she will have been she no doubt was aware that discomfort was being projected for all to see. She can have had no doubt in her mind that we would understand she was not happy.

Of course she has her share of admirers and defenders. Some of them will be coming down on this post on Facebook like a fatwa on a sodomite. Perhaps her fans should be focused on the wisdom of what she said in the interview rather than the discomfort of someone else pointing it out.