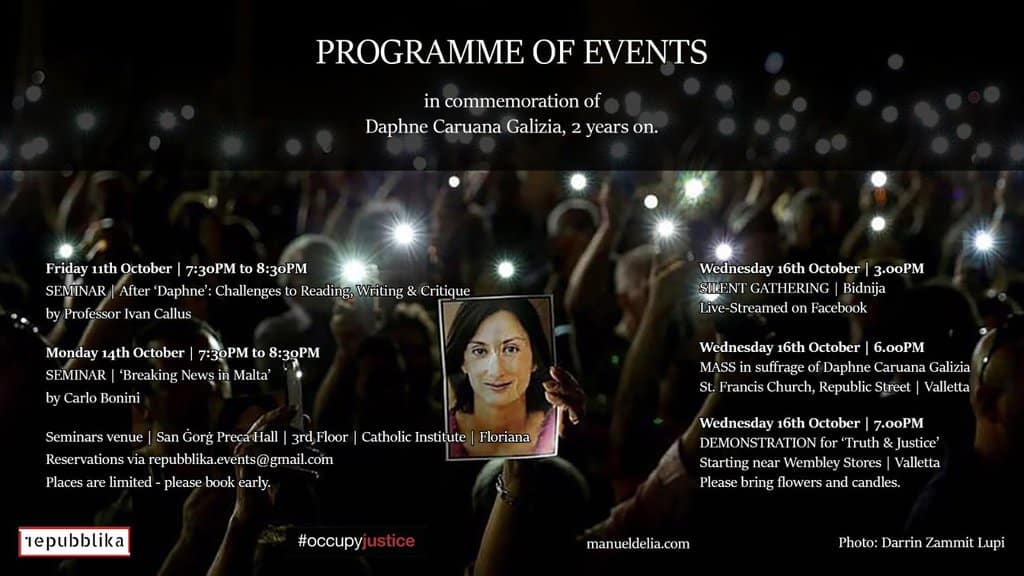 Repubblika, #occupyjustice and manueldelia.com have come together to organise events during the month of October 2019 to mark two years since the assassination of Daphne Caruana Galizia.

The truth about Daphne’s murder is not yet known. No one has been convicted of her murder yet and no one has even been charged for planning, paying for and ordering it. No independent, public inquiry has yet been opened in spite of the expiry of a deadline set by the Parliamentary Assembly of the Council of Europe.

Justice for Daphne can only start to be achieved when investigations on the subjects of her journalism are initiated. Instead, two years after she was killed, impunity continues to reign in Malta.

The following are the events planned for this October:

Daphne Caruana Galizia’s writing attracts continued attention, both in Malta and abroad. What are those aspects of form, style and pitch that give her writing its power? Aside from their political impacts, why might they invite closer commentary and analysis? And how do they connect with – and challenge – broader debates on 21st-century writing cultures and practices?

Professor Callus specialises in post-1960 literature and in contemporary critical thought. He lectures on contemporary fiction and on critical theory and practice in the Department of English at the University of Malta.

The lecture will be delivered in English.

Mr Bonini has spent the past 25 years investigating white-collar and organised crime in Italy and internationally working for Il Manifesto, Newsweek, Il Corriere della Sera and since 2001 for La Repubblica.

The lecture will be delivered in English.

Demonstration for Truth and Justice

The march will start from near the Wembley Stores and terminate in Great Siege Square.

Participants are invited to bring flowers and candles for the memorial.

Short messages will be delivered by: