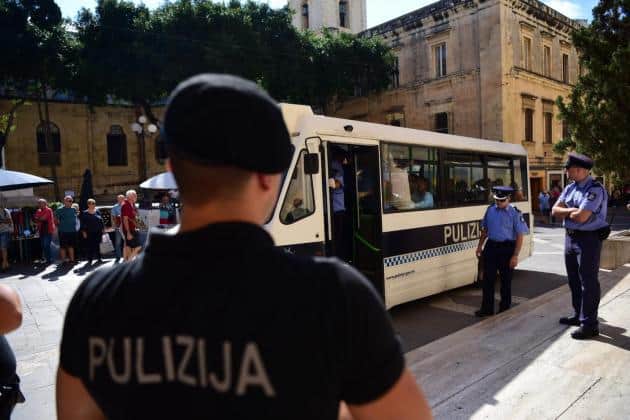 The Sunday Times’ report of this morning about scenes out of 19th century plantation abuse of black people within our very own prison is paradoxically both unsurprising and shocking.

More than a hundred people were arraigned in court charged with the violence of last week inside the concentration camp they were locked up in. The punishment handed down to them cannot be described in much better terms than collective, retributive and unfair.

Firstly, no account was given to the circumstances of the rebellion. Do not confuse understanding the circumstances of a violent act with condoning it. I do not condone the violence. But I will make a difference between a crime committed out of greed and a crime committed out of hunger, fear and manic despair. And I will defend the right of protest of people whose all other rights have been denied without process and without justification.

They were dragged to court like a herd. That is how they are perceived and that is how they were meant to be perceived. They had inadequate legal representation in spite of the indefatigable efforts of the few volunteer lawyers who stood for them. No John Quincy Adams was going to take up the brief of these Amistad rebels.

They were given a blanket punishment without discrimination for the various roles and varying decrees of responsibility of the different people allegedly involved. All black people are the same. So, whether they pleaded guilty or didn’t and whatever the quality of the evidence against them was – by all accounts very scant – they all got the same punishment and were ferried to prison.

We don’t have to like prisoners to recognise that they – white, black, gay, straight, poets and mutes – are human and eligible to fundamental human rights. It is not only that their rights as prisoners are suspended. It is also that as guests of the state they become its wards and its responsibility. They are vulnerable to violence, forced to obey officials of the state whose personal prejudices and inclinations have the power of being transmuted into official orders and actions with the entire weight of the state forced upon them.

That is why we have safeguards in the law. Prisoners – white or black – are not a sport for guards. The allegations in today’s The Sunday Times report are that they were treated as such.

If the rights of the poorest and the most deprived among us are denied, our rights will be the next to go. We owe a debt of gratitude to the newspaper, its reporters and its sources for letting us know what was happening in a place we are not meant to know about. They act as safeguards for when we’re next at the wrong end of that hosepipe.

But that is no comfort for the scared, hungry, cramped prisoners in Paola this morning. Nor is it enough for Michael Farrugia to say he will be investigating.

Establishing whether they were hosed down in the courtyard like someone’s KKK Mississippi fantasy may require investigation. The fact they are being made to sleep 8 to a bed does not require sleuthing skills. If we were allowed to walk in and check this, we’d do so. We aren’t allowed in the tent village that drove some of them mad to begin with. We have even less chance to check how they are being treated in prison.

But right now, without waiting for anyone’s permission, least of all Michael Farrugia’s, any judge or magistrate or even the attorney general can knock on the prison’s door and ask to be allowed in the prison’s division 6 to verify what The Sunday Times has reported.

That’s the law. Any one of those judges and magistrates is, so one of them publicly though anonymously claimed recently, is independent of any governmental retribution. No one can fire them, that much is certain.

I call upon Chief Justice Joseph Azzopardi to use the powers and responsibilities the law gives him to drive down to Paola right after breakfast and check on the conditions of the prisoners there. The prison authorities are required by law to keep a register for these visits – though they are not known to happen often – in which they record things they are not too happy with.

A minimum surface area in which prisoners are made to live and sleep is a fundamental human right asserted by court decisions. As are minimum exercise time, not to mention humane treatment, basic needs of nourishment and hygiene and so on.

Judges – all of them – have the power at law to verify on their own initiative at any time they please whether these basic human dignities are being respected. They are confronted this morning with the flat allegation that they are not.

We have institutions and safeguards in our law intended to protect the most vulnerable but those institutions must act. Let’s see the judges get busy or let’s see them line up behind the hose pipe and indulge their own KKK fantasies.

Previous:This is what citizenship means
Next:THE SUNDAY TIMES: They call it Socialism