I hesitate to write this. Explaining feminism to women is the ultimate form of mansplaining. I don’t like being the patronising sod who insists on explaining the off-side rule when they’re not too sure of it themselves.

But when Helena Dalli described the killing of Daphne Caruana Galizia as ‘femicide’, it rankled. I suppose etymologically it’s accurate. Daphne was a woman and she was killed. So, this was the killing of a woman, and therefore femicide.

But the meaning of words derives from its use. Too many women are victims of brutal and abusive husbands, fathers and brothers. They are stripped of dignity and liberty and too often stripped of their lives. They are not merely killed because they are women. They are killed because the fact they are women exposes their vulnerability to abuse. And the social expectation of women to be subservient to men within their households and the social expectation that within his house the word of the man is law prevents decency, civilisation, equality and even law from functioning within his kingdom.

This is what we use the word femicide for. This is its meaning.

The circumstances of Daphne Caruana Galizia’s killing have nothing to do with this. The barbarity that killed Daphne thrived and festered outside the front-gate of her house. Within her house she had serenity, shelter, dignity and protection. Outside she was subjected to vilification, harassment, isolation and ultimately death.

Granted that the fact that she was a woman is not irrelevant. The same culture that considers men kings of their domain and women their servants is horrified by a woman who openly speaks her mind in public. It is also the same culture that allows people to find it easier to assume that what a woman says is untruthful and the work of witchcraft. We were told as children that the devil is charming and he’ll lure us to sin with small truths that cover the big lie. It is that honed-in immunity to truth that allows people to assume women are the wily work of the devil.

Though the fact that womanhood aggravated Daphne’s situation, applying the term ‘femicide’ to her killing is a misleading simplification.

Some of Helena Dalli’s closest allies certainly thought so a few months ago. Feminists marched against femicide and carried banners bearing the names of women killed by their husbands or partners. When someone showed up with a banner bearing Daphne’s name, they were told to remove it because ‘it wasn’t really femicide now, was it?’ 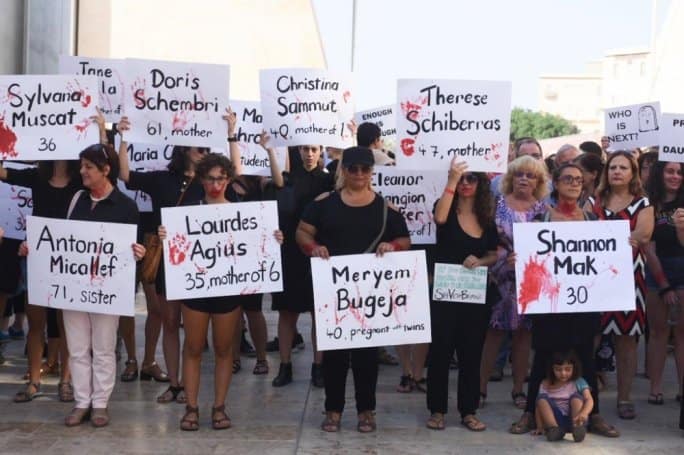 Now I’m not naïve enough to accept that their refusal to have Daphne’s name showing in their march was sincerely zealous semantics. These protests are often really meant to support and pave the way for government policy and they are suspiciously coordinated with ministers’ political interests. A poster saying ‘Daphne’ is not in the interest of ministers and protest organisers will seek to censor anything that might provoke displeasure for their political masters.

But I bring up the example to highlight the shape-shifting of semantic zeal. Will the protesters who insisted Daphne is not categorised as a victim of femicide when they protested against that form of crime, now tell Helena Dalli she was wrong to use the term in her case?

I doubt it. Because now, you see, the opposite attitude to the use of the same word has a beneficial application for the government.

It’s not like Helena Dalli could have said in yesterday’s hearing the sort of things Tony Zarb would say. I don’t know, things like Daphne was really a victim of matricide (her children did it), or that she deserved it because she was a witch and witches must burn.

But she couldn’t call Daphne’s killing what it really was either: an assassination; the targeted, wilful and mafia killing of a journalist who investigated political corruption and its association with organised crime.

Why couldn’t she? Because acknowledging the term assassination means that the government she belonged to must assume some responsibility for its causing. The failure of security and protection of the state’s public servants, because that is what journalists are. The failure of leading the public lynching by binging in libel suits, encouraging private players to whip her with libel tourism, freezing her assets, launching bogus financial investigations, and above all using the party media to vilify, lampoon, misrepresent and dehumanise her.

The government Helena Dalli belonged to can never acknowledge this was an assassination. Kurt Farrugia’s final act as government spokesman was to commit that on paper telling a journalist in writing that “assassination” as a term has political implications that cause him to refuse to use it to describe what happened to Daphne.

When Helena Dalli used the term ‘femicide’ yesterday she used all the women who are victims of abuse to the point of losing their lives at the hands of their violent and murderous husbands, fathers or brothers. She flipped them in front of her as a shield against any possible political price that she might have been made to pay for the assassination of Daphne Caruana Galizia.

She used ‘femicide’ to deflect and protect herself. That is not the behaviour of feminists. Again, I am loath to be the one to explain to Helena Dalli, a woman, what feminism is as if it is a man that must explain it, or worse as if being a man necessarily means I know everything about anything, including feminism. But I would not expect a feminist to dilute the meaning of words that describe the worst crimes committed against women.

To illustrate the point let us take Helena Dalli’s remark at face value. As a feminist campaigner and equality minister, why did she not describe Daphne’s killing as ‘femicide’ before yesterday? Why hasn’t she acted on it? Why hasn’t she rebuked Labour Party spokesmen who mocked her after her death? Why hasn’t she led by example and paid respects at her memorial?

In Daphne’s life, what did she do about public remarks about Daphne made by her husband and her son? Why did she not intervene to stop the campaign of malice and hatred on the Labour Party media when Daphne was still alive?

There was another cop out in Helena Dalli’s answers yesterday. She was asked about Konrad Mizzi having a secret stash in Panama and still being a minister in the government she belonged to three years after being caught red handed. She said she’d have done things “very differently”. She wanted people to understand she disapproved both of Konrad Mizzi’s secret stash and of the prime minister not firing him.

Why didn’t she say so before? Why did she vote against a non-confidence motion in Konrad Mizzi in Parliament? Why didn’t she do things differently when she could?

And in any case what does ‘differently’ mean? Because after all differently could mean that she would have given Konrad Mizzi a medal and elevated him with praise.

“Done things differently” was a deflection. It was good enough for MEPs and for Helena Dalli it did the trick.

But we are left wondering if justice would not have been better served if Helena Dalli actually did things differently when she could.

Consider for example if Helena Dalli had insisted publicly, in Parliament and in Cabinet that Konrad Mizzi must be relieved of the protections of ministerial power so he could be prosecuted for the crimes he’s alleged to have committed. Consider if Joseph Muscat had realised that retaining Mizzi would cause him problems and as a consequence he would have fired him. Consider then that Konrad Mizzi – and, perhaps more importantly Keith Schembri – would have faced justice.

In that scenario, where impunity did not reign in Malta but justice would have instead, it is quite reasonable to suppose Daphne Caruana Galizia would have remained alive, recognised for the hero that she was for uncovering corruption which was in good time punished.

Daphne would be alive. And Helena Dalli would not need to speak of a femicide which wasn’t or an assassination which was.

One final question. How many others still in Joseph Muscat’s government today would have done things differently?