GUEST POST: Daphne’s murder is a blot on all of us 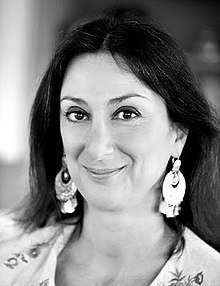 Two years have gone by and still the world is in the dark about  by whom, why and when this gruesome deed was planned.

It is unacceptable that it should take so long to fathom out who ordered and paid for this murder. It is also unacceptable that no truly independent Inquiry has been set up to investigate whether or not the authorities had had indications of threats to Daphne or whether they ignored such threats and failed to provide adequate protection.

I would have imagined an independent inquiry to have been led by, or at least to have included within it some International experts in commissioned murders from another country to ensure that the convoluted and intricate , sometimes, unseen connections between Maltese experts and Maltese society from where , most probably, the person who ordered the murder is an active member, do not distort the findings.

Should it be discovered that the murder was commissioned by a foreigner with business or underworld connection to Malta, then, an international expert would be even more desirable.

Having nominated persons who have either judged, represented  or have even the most remote family or professional connections with anybody in the political, police, criminal or business world which had been journalistically investigated by Daphne taints the Board of Inquiry from the very start.

Any person nominated already or to be nominated should recuse themselves or not accept the nomination should any such connection, however remote, exists.

Since Malta is known for its closed shop mentality and most active or retired professionals would have , if they search their souls and their records, such connections , however slight, it is imperative that they flag these and renounce their nomination.

Malta, and the onlooking world, need to have complete and  absolute reassurance that the Board is completely expert in this field and completely independent. Otherwise there will never be peace of mind that really no stone would have been left unturned.

In Slovakia, where a similar murder in cold blood took place a few months after our Daphne had been blown up in the air, the Slovaks, however much we, in Western Europe, mistrust the former Eastern European Soviet satellite states for the independence of their judiciary , the trustworthiness of their police and the democratic inclinations of their post-Soviet Governments, the crime was rapidly investigated. A businessman had been found to have commissioned it. A business man who had been the subject of investigations into corruption by the murdered journalist Jan Kuciak was found guilty and sent to prison. The Prime Minister and several Ministers resigned and the general public who had held several mass demonstrations calling for justice after the murder, found peace. The country , with a very short democratic experience, following the 70 years of Communist corrupt regimes and the fall of the Berlin Wall in 1989, proved to be made up of much more robust and honest people than our own country. Our country boasts that it has been a democracy for much longer, it boasts of having independent police and judiciary and a liberal socialist government that boasts about equality before the law, transparency, meritocracy and accountability. Yet, our country has failed miserably to pass the test.

Not only have its politicians not resigned when the journalist, without any police protection, in spite of known threats to her and her family, was brutally exploded to pieces on the 16th October 2017, but they have failed to set up an internationally acceptable Board of Inquiry and only did this when given an ultimatum by International Organisation which Malta forms part of.

The Police have not called in enough foreign experts to help them in their investigations and seemed sufficiently satisfied to have found , what appeared to be the actual three persons who physically carried out the hateful deed. In two years we have heard no press releases or information on the developments in their investigation of who commissioned this heinous deed. They have kept the public in the dark. What are they afraid of? The public needs to know when such events take place.

Even the general public and a number of journalists have simply ignored the issue and carried on living as though nothing had happened.

A few stalwart believers in the rule of law, the freedom of the press and the trust in the police gather every month to remind the authorities and the world that there are still decent people in this country. But , unfortunately, all too few. Most Maltese stay at home in front of TV or visiting their families on the 16th of every month for the last 24 months. Even when larger demonstration took place in the first months after the murder there were only ten or fifteen thousand at the gatherings in a country of 400 000 with another 100 000 foreigners living amongst us. Nobody really cared and this is the most serious blot on our common character.

Not only were the initial demonstrations small, when compared with the enormous crowds gathered to protest in Slovakia, but as months passed by the people gathering in Valletta became fewer and fewer.

As these few gathered in Valletta and placed candles, flowers and pictures of Daphne on the memorial, the government in the form of its Minister of Justice called in the cleaners to regularly wipe out all traces of signs of mourning, respect and indignation by the few for the loss of Daphne. Individuals have also taken it upon themselves to destroy all memorials left by the sad protestors who do not want to see the complete erosion of the rule of law in Malta.

How such a murder could also become a party partisan issue is another totally Maltese phenomenon.

We are sick and it hurts me to say this.  I do not think that the majority of Maltese want to find out what actually happened in October 2017 . They wish to forget. But they shall not because brushing the truth under the carpet and running away from the responsibilities that should fall upon the Authorities who failed to protect her before the event and who have failed to uncover the truth after the event and who have harassed the gallant protesters calling for truth and justice will be held to account sooner or later. I wish them sleepless nights because those guilty of commission or omission will always be remembered by Our Creator in heaven. Their day of reckoning will come.