The messages were clear.

‘Daphne won!’ said Leo Luca Orlando, the Mayor of Palermo, a city once in the grip of the mafia.

As living proof of these convictions, thousands of people cheered the speakers in Republic Street last Wednesday, on the second anniversary of the brutal assassination of Daphne Caruana Galizia. Thousands of people stood in protest against a government whose rampant corruption is now so overwhelmingly exposed that, by the time it lied to the American Embassy on the same day as our demonstration, it felt, it feels, because it is, that these crooks have truly nowhere left to hide.

Lying to the US Embassy no less. Telling the American Embassy that an independent inquiry is being established when Pieter Omtzigt shot down the government’s incredible attempts to place three government stooges in charge of an inquiry which had clear stipulations for independence and impartiality. Malta Government telling porkies to the US Embassy.

If the multiple crimes this government has committed weren’t so stomach-churning, this would be laughable. It’s the child screaming he didn’t steal the biscuit when he’s got crumbs all round his mouth and chocolate smeared across his lips.

The French documentary, Enquete Exclusive – Malte joyau de la Mediterranee et paradis de la corruption, provided conclusive evidence of what we already know: that corrupt lawyers (in this case, Chetcuti-Cauchi) are in bed with this corrupt government, flogging Maltese passports to anyone with the money to buy one.

Just this week, yet another Maltese passport holder was arrested. Anatoly Hurgin, a man of Russian descent with Israeli citizenship, was once a member of the Israeli defence forces. Daphne Caruana Galizia herself raised the alarm back in 2016, detailing his business expertise in phone hacking and ‘cutting-edge’ (spying) surveillance technology. When granted Maltese citizenship, Hurgin was already facing a lawsuit in the US for violation of the Securities Act. His recent arrest brings the number of Maltese passport buyers charged with massive financial crimes to a total of 5 this year.

Despite being exposed in the French documentary, the government categorically denied any wrongdoing and Jean-Philippe Chetcuti went so far as to claim that his words had been mistranslated. Having already been suspended by the crooked government he’s in cahoots with, Chetcuti denied he’d said anything about obtaining illegal advantages for his clients or using ministerial friendships to nudge-nudge wink-wink applications or assuring potential clients that ministers could ‘turn a blind eye’ to any dodgy misdemeanours from their past.

To ensure nothing was lost in translation, Luke Chetcuti’s boasts that Chris Cardona sent Konrad Mizzi a text to get him a bigger slice of the beach was swiftly uploaded in its raw original form. No mistaking Hugo’s grieving son bragging about his pals in power.

Yet Cardona refutes all this, not with the kind of failsafe evidence Pieter Omtzigt could provide to the US Embassy to prove that the government isn’t engaged in any form of independent public inquiry whatsoever, but with flat denial, which holds as much weight as the phone records he refused to present in court to prove he wasn’t in that German brothel. Cardona, who’s never been interrogated by the police, is friends of two of the men accused of assassinating Daphne Caruana Galizia, and we’re simply expected to take his word for it again? Mhux hekk!

They’re skating on thin ice, these guys, or they’re dropping some kind of hallucinogenic concoction derived from the medical cannabis they’re promoting alongside Artificial Intelligence and Blockchain.

At the beginning of the week let’s not forget there was a book launch. Murder on the Malta Express is written by three rather intrepid journalists who did the standard journalistic thing and sent questions to various people mentioned in the book, like Joseph Muscat, Keith Schembri, Konrad Mizzi, Chris Cardona – funny how the same old names keep reappearing – and Mrs Michelle Muscat, not a politician or royalty but a plain old private citizen, albeit one accused of owning an illicit offshore Panama company called Egrant by another journalist who was subsequently assassinated.

Rather than do the normal thing and send back their replies – in the reasonable hope of maintaining one’s good name – the only response came from a cutthroat legal company called Carter-Ruck. Not only is this extremely high legal cost at the expense of us taxpayers but these legal mercenaries replied on behalf of the Maltese Government despite Michelle’s exclusion from this club.

‘Carter Ruck is known as Carter Fuck, and this firm also acts for the Church of Scientology, which is a space alien cult. I find it incredible that public money in Malta is being spent to defend the name of the Prime Minister, Chris Cardona, Keith Schembri and Konrad Mizzi and that they’re blowing the money on lawyers who act for space aliens. Come on, get on your spaceship and go back to Planet Zorg. This is a clear waste of public money. It’s also a clear attempt to threaten and intimidate us but it has the opposite effect. The moment I know Carter Fuck is on my trail, I know I’m doing a proper job.’

This proper job has been further reinforced by the fact the book has been snapped up for a TV series by New York’s Topic Studios in partnership with US incubator Vespucci Group and Italy’s Indiana production. Topic Studios is the company behind The Laundromat, a film based on the Panama Papers and starring Meryl Streep who dedicated her work to Daphne Caruana Galizia. You don’t get much bigger than this and credit to Maltese imprint Midsea Books for sticking their heads above the parapet and publishing the book in the first place.

The Sette Giugno mob attempting to siphon off public funds without so much as putting the project out to tender must be spitting blood. Poor old Albert Marshall, that firebrand Laburist of the vicious kind. All he’d done as Chairman Mao of the Arts Council was respond to an approach by a private company owned by a certain Mr Magro who just happened to be the former consultant to V18 barbarian Jason Micallef who only had over 250 international writers demanding his resignation.

No doubt Marshall can muster up some support from those financial wizards at Nexia BT. Brian Tonna and Karl Cini are probably busy writing their support for their mates at the now defunct Mossack Fonseca who, while facing charges of massive money laundering and fraud, have so far failed in their attempts to block Netflix showing The Laundromat which was screened last Friday. God forbid their reputation should be tarnished further and the name of Jacqueline Alexander potentially dragged through the mud.

You want post-truth? You got canned laughter.

But I wasn’t laughing when I arrived at the protest-memorial in Valletta on Wednesday morning, 2 years to the day of the assassination. Helene, Daphne’s youngest sister, was there as she often is, placing posters, mounting her protest, demanding justice for the callous execution of her sister with impunity.

None of us who protest alongside the Caruana Galizia family can imagine their pain. It is beyond imaginable.

Helene turned to me when I called her name and said she wished I’d been there just minutes ago. A posse of men in black suits had formed a menacing line in front of her, a mafia show of intimidation if ever there was one. And this, Ladies and Gentlemen, was not the government, but the so-called opposition, as state-captured as every other institution in this godforsaken land.

‘I’ve come to pay my respects,’ said Delia, standing over Helene threateningly as all pathetic bullies do. Behind him was his camera crew, there to capture the moment when Delia, named in the Soho brothel business with Cardona, would cynically place his wreath for a journalist he called a biċċa blogger, a woman he filed 4 libel suits against less than 2 months before she was murdered.

Nobody gate-crashes a funeral when you’re not invited. You don’t physically force your way past a grieving relative who’s requesting you to go. You don’t feast at the foot of an altar when you’re awash with the blood of complicity. It is, at the very least, simply not good manners. It breaks all laws of basic human decency.

But when you live in a country that’s so morally corrupt that the fundamental lessons we teach our children before they can walk have been thrown out the window along with the excrement flying from the potty then nothing, it seems nothing, is unacceptable.

Shame on you crooks, Helene repeated. Shame on you, she said as the row of men in suits elbowed their way past, daubing themselves, grotesque and undignified, in the shame that they pretended to ignore.

Two years to the day of her sister’s horrific assassination, Helene epitomised the power and the resilience and the certainty of absolute resistance to all that is wrong, to all that is corrupt beyond corrupt.

The integrity of her defiance can have no equal, but the strength of her actions and the force of her convictions were sustained by the thousands who filled the streets of Valletta that evening, in a protest replete with optimism and fuelled by a certain sense of victory. The sheer force of the human spirit which can overcome the darkness was vibrant, unflinching and implacable.

This was captured in the most visible and remarkable and triumphant way through Daphne’s family: her parents, her husband, her three sons, her three sisters, her two nieces. They stood side by side in front of the banner inscribed with those unshakeable principles which carry a momentum of their own: Verita u Ġustizzja.

‘You won, Daphne!’ said the Mayor of Palermo.

You won, Daphne, you won.

You did win, Daphne, and because of this, we know we’re winning, too. In what can truly be described as a battle against evil, the power of truth and justice is unstoppable. 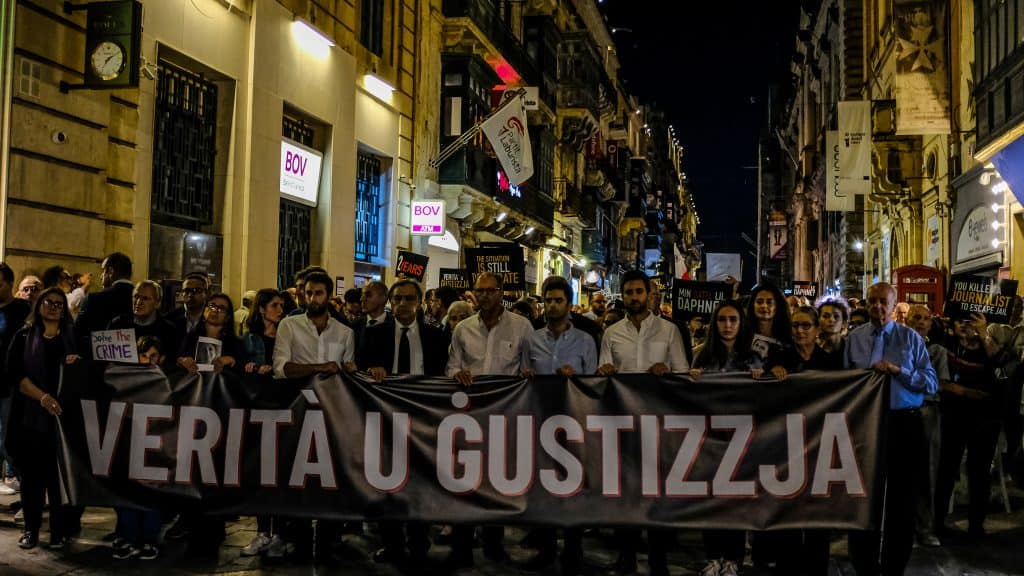