Here’s Andy Ellul reacting to the ongoing Graffitti sit in protest in the side lobby of the Auberge de Castille.

Here’s my answer to Andy Ellul. Yes the police should evict anyone breaking the law in the Auberge de Castille because the building deserves respect. Fortunately Keith Schembri is not reporting for duty though the police would have done well to drag him out of there three and half years ago.

But there’s still a list of people they should be dragging to police HQ to interrogate them for much worse than sullying the floor with their trousers. Neville Gafa’, Sandro Craus, Kenneth Camilleri would be a good start.

And, if he dares show in his own office today, Joseph Muscat, for presiding over the cover-up of a murder and aiding and abetting the presumed mastermind of the crime,

Moviment Graffitti may be trespassing but they’re obeying a higher law than the one Andy Ellul is bothered with: the law that demands of citizens to care about their country and to act in any peaceful way possible to challenge crooks and accomplices in murder from sullying the dignity of the highest executive office of the land. 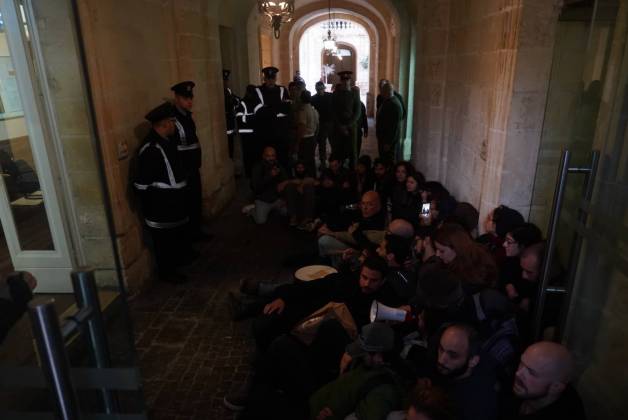