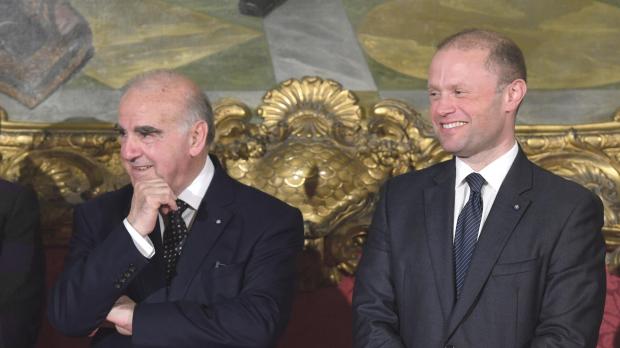 In 2015, Daphne Caruana Galizia reported that Economy Minister Chris Cardona was squatting in a luxury apartment owned by Silvan Fenech, cousin of the man who is now charged with masterminding her assassination, Yorgen Fenech.

Muscat was elected on the mantra of “transparency, accountability, meritocracy”.

Six years later, there was a slight problem.  Daphne Caruana Galizia reported that Muscat’s very own economy minister, who was made responsible for casino licences instead of the finance minister, was living free of charge in a luxury apartment loaned to him by his drinking buddy Silvan Fenech of the Tumas Group, who lived in the flat next door.

On 18th October 2015, the economy minister (who recently suspended himself and then re-instated himself, both being constitutionally impossible) was reported by the Malta Independent on Sunday to having claimed paying €14,400 for the year’s lodging in the Portomaso apartment owned by Silvan Fenech and then moving out (where he went to after that is yet another story).  Daphne Caruana Galizia pointed out that this figure tallied with claimed annual income from rent he received in 2014 and 2015: €14,400 to the dot.

There had been no scandal in 2014.  If one believes that the income and assets declaration Cardona sent to parliament in 2014 was correct, which figure had been fixed to tally: the income received, or the payment made?  The veracity of the lease agreement and the rent payment remained subject to doubt until it became yesterday’s news and faded away in the growing mists of ever-flourishing government scandals.

In 2017, the Panama Papers scandal erupted.  The servers of Mossack Fonseca had been hacked and by sheer coincidence, Nexia BT were their “coincidental” outfit in Malta.  No one in Malta planned the hack, but Daphne Caruana Galizia bravely lifted the lid on sleaze, graft, corruption and criminal activity we had never seen or really known about before in the highest echelons of government.

Keith Schembri, Konrad Mizzi, and by extension Muscat himself, were all implicated.

The trail led to Pilatus Bank.  Extensive money laundering activity involving sanctioned countries which are now subject to a high-profile trial in the US, the now infamous 17 Black in Dubai, Trusts in New Zealand, companies in Panama, and goodness knows what else we still may learn.

Keith Schembri had a stranglehold on Adrian Hillman.

Adrian Hillman was the managing director of Progress Press Ltd and Allied Newspapers Ltd, publishers of the Times of Malta and The Sunday Times, and he was getting illicit payments from Keith Schembri, who was supplying paper to the companies.  Hillman was rewarded for his loyalty with a little-published reward: he was appointed in June this year – this year – to manage the reputation of the Malta Gaming Authority, earning €48,000 a year from taxpayers despite being subject to a magisterial enquiry on claims of money laundering.

Sources “close to the MGA” confirmed to the Times of Malta on 26 June 2019 that he had been in the seat at the Malta government agency for the past two years by direct order given to him on the instructions of the Office of the Prime Minister.  By direct order given to Hillman on the instruction of the Office of Schembri and Muscat.  An FIAU investigation had found that there was “reasonable suspicion” that Schembri was involved in money laundering activity after transferring hundreds of thousands to Hillman.  Yet both walked free.

Muscat also, I repeat, also, appointed Hillman as his, I repeat, his, representative on the Board of Trustees at that other shady outfit, the “American” University of Malta (and that is yet another story).  In March 2019, during the official inauguration of the AUM, Muscat said that he had “no problem with Mr Hillman”.  Muscat now tells MEP Roberta Metsola that Schembri betrayed him.  Crooked Muscat betrayed Malta.

In April 2016, before the prime minister, strangely, called an early election, parliament debated and held a vote of no confidence on disgraced government minister Konrad Mizzi.

Then Foreign Minister George Vella joined the entire Labour parliamentary group, including Godfrey Farrugia, in voting against the motion.  Farrugia now regrets it, which is more than can be said for any of the others.  Evarist Bartolo spoke cryptically in “Maria l-Maws” terms (his column’s pseudonym) saying “politicians should lead by example” but then backing his villainous cabinet colleague.

George Vella, now president, who many wrongly hold to be the guardian of the constitution and the father of the nation, as he has proved himself to be neither, said that “he will act on the basis of the national interest while also considering the record of those who are making the allegations” (here directly meaning Simon Busuttil and Daphne Caruana Galizia – tell me, who else?), including “the fact” that he said “they did not fight corruption when they could…”

On another planet, he went on to list the achievements in foreign affairs, including CHOGM and the EU summit held in Malta.  Explosively, he said that the PN “opposition was trying to destabilise the government, as had happened in the past”.  He asked: “Who placed bombs in the past?”, intending to intimate that the opposition were responsible for bombs planted in the 80s.

Konrad Mizzi’s vote of confidence won.  He had the confidence of government, and by extension of their absolute majority, of parliament.  Malta was condemned to a slippery slope of graft, corruption and murder, by crooks, villains, pimps and scoundrels.

George Vella is now president of a banana republic, and the others, save Schembri and Mizzi, are still comfortably ensconced in their taxpayer-funded principalities, occasionally egged.

The only purpose of the two CHOGMs and the EU summit was to satiate Muscat’s thirst for grand-standing, or what his risible wife Michelle called “the treatment”.  I wonder if she’s still enjoying the “treatment” and calling herself “The Spouse of The Prime Minister of Malta”, emulating Michelle Obama and dressing up in a poor imitation of Eva Peron.

If none of these crimes had been tolerated, Daphne Caruana Galizia would still be alive.

In a normal western democracy, the grandees of the Labour party, the invisible Louis Grech, Edward Scicluna, George Vella, Chris Fearne and party whip Godfrey Farrugia would have gone to prime minister Muscat after the discovery of the Panama Papers, and advised him that he no longer enjoyed the support of the Labour parliamentary group.

In a normal western democracy, prime minister Muscat would have slunk off to the president and advised her (it was then Marie-Louise Coleiro Preca) that she needed to consult with the Labour parliamentary group, to find which Labour MP commanded majority support.

In a normal western democracy, Muscat would have been forced out, gently, in 2016.

But Muscat was not gently nudged out because this is not a normal western democracy.  And the now-president George Vella did not lift a finger then, nor now.  This is a government run by crooks, villains, pimps and scoundrels.  The criminal cabal which ran, and still run, government increased their baying against “is-sahhara tal-Bidnija”.

Mrs Caruana Galizia was assassinated for daring to uncover criminal activity at the highest levels of Malta’s government, for your benefit, and mine.