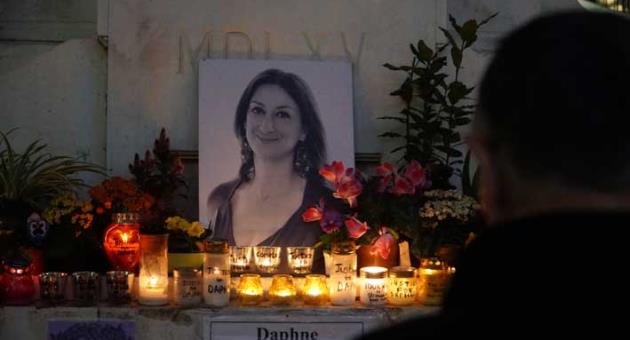 The Constitutional Court today ruled in the case I filed in September 2018 against Minister Owen Bonnici finding that the minister breached my fundamental human right to free expression when he ordered the removal of flowers, candles and messages of protest that were part of the campaign for truth and justice for Daphne Caruana Galizia.

I filed the case in my own name because in order to have legal standing one needs to show they’re themselves a victim of abuse. But of course, the court found that every person who put flowers and candles on or around the Great Siege Memorial in Valletta had their fundamental rights breached.

Owen Bonnici didn’t just do it when I filed the complaint in September 2018. He’s done it every day for some 500 days and the court had something to say about that.

I quote (my translation): “The Court considers the excuse Owen Bonnici gives to justify the removal of the protest items. The use of the Memorial for some advantage is nothing better than a meaningless pretext. The Memorial is what it is: an honour to the Maltese people of all time. That’s how it should stay. Those who use it wrongly for some other purpose should find no protection. The Court considers that this applies to Owen Bonnici. It does not apply to Manuel Delia (and other protesters).

“The removal of items was intended to discourage the protest. The daily removal of protest objects was a result of pique. This was evidently a systematic method of disruption and obstruction that should never have happened. It was absurd for Owen Bonnici to think that Manuel Delia had any interest in spoiling the Monument to denigrate it by leaving the site in a bad state. The removal was altogether disproportionate. It is not in the State’s interest to see division happen. In today’s case Owen Bonnici’s behaviour changed the site into an instrument of division, which it should never be.” (Page 111).

The court flatly rejected the term “rubbish” that Owen Bonnici used when defending his order for the cleansing department to “clean up” the memorial. (Page 78). Indeed, the court says “the objects were removed from the site not because they amounted to rubbish but because Minister Bonnici ordered their removal.” (Page 80).

The court also rejected the excuse Owen Bonnici gave that the memorial was boarded up for 3 months because it needed restoration. The court said it was not “morally serene and convinced the restoration was ordered because of any damage to the Memorial by the protest items. If this had been the case the objects would not have been left there for 11 months.” (Page 81).

Bottom line: “The Court is firmly convinced that from the evidence it has seen, the removal of protest items was specifically intended to suppress the right of Manuel Delia and others who feel the way he does to express their views freely in that way and from that place”. (Page 82).

The court today declared my rights were breached, and ordered Owen Bonnici to pay me a compensation of €1,000 and to return to me the banners he ordered his officials to deposit in the court registry. He also ordered Owen Bonnici to pay all court fees except where these cover a claim I made in my case that my right to a fair hearing was breached when we tried unsuccessfully to ask for an injunction on the removal of flowers and candles.

The court also ordered lawyer Joe Brincat, who intervened in the case, to pay for his share of the expenses.

The court recommended that in future protesters take care to avoid any damage to the memorial, particularly sensitive parts of it in the upper side of the plinth.