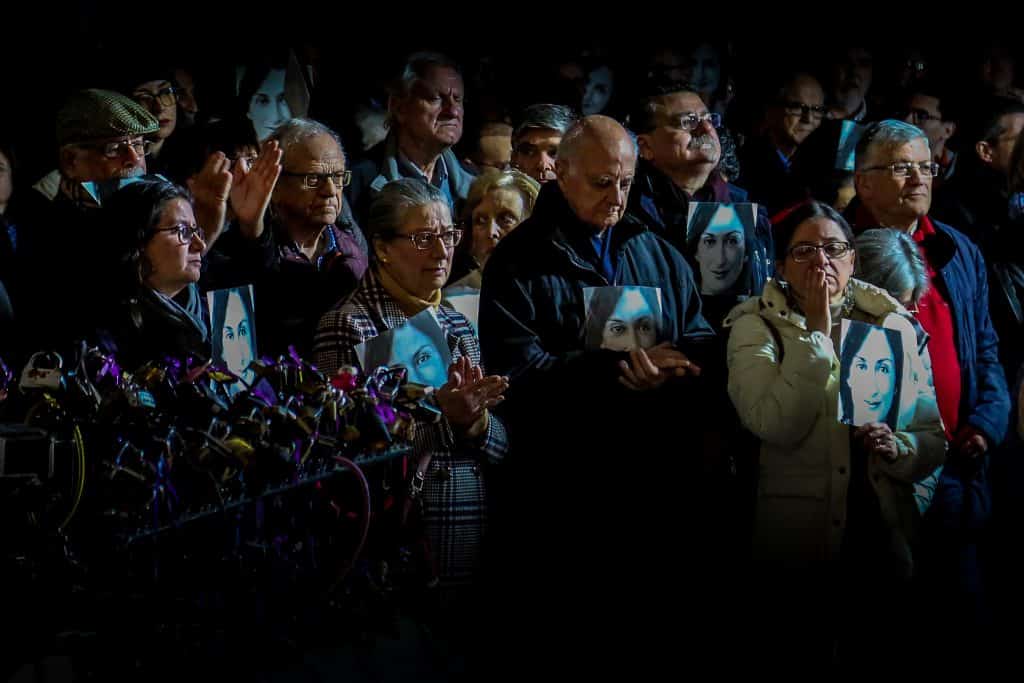 The court effectively found the rights of Daphne’s family were breached. Yet another way in which the state repaid them for the sacrifice of their mother, wife, sister and daughter.

It found the rights of all activists and protesters were breached. I filed the case in my own name because there’s no such thing as group rights here. But I would like to pay tribute to activists from Occupy Justice, Repubblika, il-Kenniesa, Aditus and other groups who kept this campaign going.

I’d like to pay tribute to Ann Demarco who is the front-line hero of this protest. With the help of others, she assiduously and daily braved the insults and the assaults but also the shock of finding the memorial removed most mornings and on some strewn, vandalised and besmirched with the venom and hatred of people like the tomato ketchup criminals of a couple of nights ago. The court today referred specifically to Ann’s testimony about her daily visits to the protest site and the work she does there every day and used that testimony to reject the government’s claim they needed to “clean” the memorial because nobody else would.

Although intuitively it felt like Owen Bonnici’s orders were a breach of my rights I would not know the first thing on how to argue that. And in any case, I don’t have a license to argue in a court room.

I’d like therefore to thank Therese Comodini Cachia, Eve Borg Costanzi, Paul Borg Olivier, Karol Aquilina, Jason Azzopardi and Andrew Borg Cardona. I could never afford a legal team like that if I had to pay for it, which is why people like these experts and professionals but also friends and supporters step up and fight on their own front – the courtroom – the battle activists fight in the street.

But this battle was also fought outside the courtroom. We needed to explain that we were not the ones causing the division, that no, what we were doing was not the same as putting a picture of Elvis outside your neighbour’s door and that the right to protest is not qualified by the extent to which the government you’re protesting against approves of your methods.

I would therefore want to specifically thank PEN International, RSF Reporters without borders, Article 19, the European Centre for Press and Media Freedom, IFEX, the International Press Institute and other organisations who sent their representatives to join us in the protest in Great Siege Square and suffered with us our government’s abuse of our fundamental human rights.

I would like to specifically thank MEPs Ana Gomes, Sven Giegold, Stelios Kouloglou and Sophie in ‘t Veld among others who with David Casa and Roberta Metsola gave their personal example by visiting the memorial and participating in the protest fully expecting our government to crush it by the following night.

I thank Antonio di Pietro who was in Malta within days of Daphne Caruana Galizia’s assassination and sought to be among the first to pay tribute to her at the memorial in Valletta. Many others followed him including many journalists from all over the world who found in Daphne an inspiration and in the fight for truth and justice for her a cause they firmly believed in.

I would like to thank the Council of Europe’s Parliamentary Assembly rapporteur Pieter Omtzigt who on several occasions expressed his bewilderment at the government’s actions, at the outrage of our basic rights, at the insult to the memory of Daphne Caruana Galizia, at the callous lack of embarrassment for its manifestly embarrassing behaviour and at Owen Bonnici’s perverse reference to laws to base his response for his illegal actions.

But above all I would like to thank people I have never spoken to and maybe I have never seen who did not wait for vigils or for protests but left a candle or a flower every time they went into Valletta for some other reason fulfilling their civic duty in their own quiet and noble way by joining in a protest they believed in and continue to believe in.

Alfred Sant wrote today that it is facile to speak about being “proud of being Maltese” when none of us actually did anything to earn that title except for being born into it. He did say though that it is justified for one to express pride in Malta’s “economic successes”. Perhaps.

I feel pride in sharing with the people I mention here – not Alfred Sant — values that are deeper than an understanding of human rights as they are established in law. With all the people who participated and continue to participate in this protest I feel I share a sense of basic decency and humanity. The indignation at a murder of a journalist who was merely doing her job. The defiance against the abuse of political power by governors who pervert democracy into a means for their own profit. The determination not to compromise the dignity of a peaceful and firm demand for truth and justice as we stand by a family who suffered such an unnecessary and unfair loss.

When I stand with all those people who did this, I feel truly proud.

Previous:Instrument of division
Next:Is Owen Bonnici even a lawyer or is he lying about that as well?