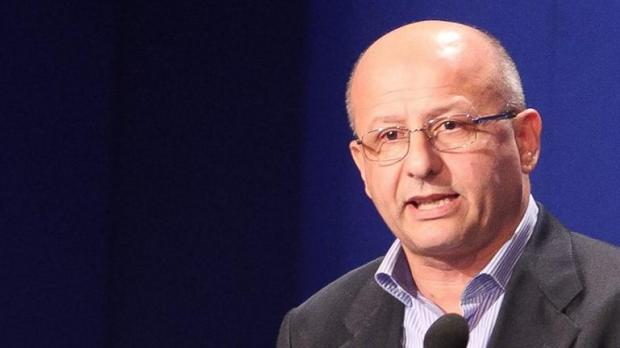 Edwin Vassallo said he was annoyed with a piece I wrote on Friday where I challenged Adrian Delia to reassure us his leadership campaign and his party since his election were not funded at least in part by Yorgen Fenech.

It’s likely that wasn’t really the cause of his irritation. After all it’s not like that sort of thing comes as a surprise if you’ve heard of my blog. And Edwin Vassallo heard of my blog because when he was on one of his bashing of bibles and gnashing of teeth crusades, causing trouble to his party leader before this one, he phoned me to ask me to comment favourably about his disloyal parliamentary interventions.

This time he was likely more annoyed that on Friday I, with two colleagues from Repubblika, visited the PN’s headquarters on the invitation of its secretary general and the roof did not fall over our heads.

But I’ll give Edwin Vassallo the respect of taking what he said at face value and to accept that the true reason for his outburst was motivated by argument and disagreement with something I said.

His parry riposte was a question to me. “Who is paying Manuel Delia,” Edwin Vassallo asked, “to politically murder Adrian Delia?”

Ah. Tu quoque. Where have I heard that before?

Look, Edwin Vassallo. Unlike Adrian Delia I’m not a holder of constitutional office. I’m not leading a political party. I’m not a member of parliament. And I’m not seeking election as prime minister and head of government.

So, if you don’t mind too much, I ask the questions here.

Of course, there are ethical rules governing the business of journalism and commentary as well. If Edwin Vassallo has reason to believe I am a paid mouthpiece for someone who benefits from Adrian Delia’s political suffering he should say who he thinks is spending their money with such pointless profligacy. Because unlike Edwin Vassallo I do not presume to think that I have any influence or any hand in Adrian Delia’s political misery.

This blaming-the-media Trumpism is insufferable and also very cowardly. Adrian Delia does not fail to put his party together because I comment about the fact that he fails to put his party together. That’s like blaming a journalist for the embarrassment of having a prime minister who takes bribes. The embarrassment is not caused by the journalist. It’s caused by the prime minister.

Anyone who benefits from Adrian Delia’s political ineptitude needs spend no money. They can sit back and watch. As they do. And sometimes they give him a little helping hand themselves. When Karl Stagno Navarra, Robert Musumeci and Robert Abela express sympathy with Adrian Delia they do so because they really, really, really don’t want him to exit the political scene. For as long as he stays in it, their rule is assured.

Consider how Adrian Delia recently confessed to Mellieħa Labour Party supporters he feels more welcome in their company than in the company of supporters of his own party. He was speaking over a couple of drinks. In vino veritas. They love him in the Labour Party. He’s the best thing to have ever happened to them. Surely, Edwin Vassallo, should realise Adrian Delia doesn’t need my help.

I replied very briefly on his Facebook wall to Edwin Vassallo’s question on who’s paying me to write. The short answer is ‘my wife’. Because it’s thanks to her patience and willingness to carry the responsibility of feeding our family practically single-handedly that I can dedicate so much time to writing this stuff and the odd bit of activism. 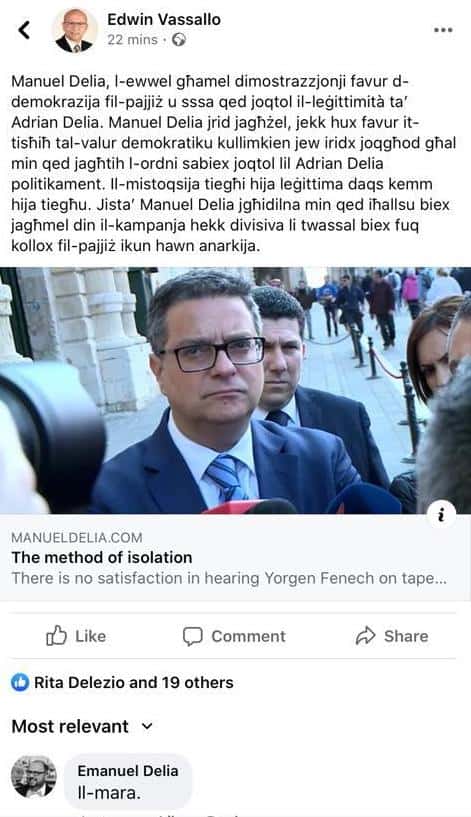 Then there’s some donors who donate to this website a little bit a month to help pay the costs, most of them in security for the website to fight off denial of service attacks from people who do not like what I write. If I thought Edwin Vassallo knew what one of those was, I’d ask him if he had anything to do with them.

There’s some advertising on the website but it’s all Google Ads so I don’t get to see who books adverts, let alone have my opinions misdirected by the magnetism of their advertising budget. Advertising pays a few hundred euro a month which is nice but hardly a stable income.

Fact is I don’t need to be paid to say what I think. And Edwin Vassallo knows this because it’s not like he’s in the PN or in parliament to rake in the tens of thousands. It’s sad that he’s not grown up enough to imagine that even someone who does not agree with him on who should be PN leader can be willing to do what they believe is the best way to provide a public service for little or no compensation.

In writing that post, I imagine, Edwin Vassallo thought he was doing his version of a public service. He is convinced Adrian Delia is the man for the job and he thinks discrediting his critics is a good way to help him to do that.

This is not merely idiotic. Plenty of that sort of thing from Edwin Vassallo but usually relatively harmless. This is dangerous. I do not want to cast myself as some sort of victim but when journalists are discredited in this way so politicians can survive, we are playing with fire and it’s usually not the politicians who get burnt.

It is my job as a journalist to ask Adrian Delia the questions that I ask him. His job is to answer them. And Edwin Vassallo’s job? It’s to make sure he belongs to a party that is not infiltrated by the mafia. The way to do that is not discrediting me and raise the heat of his trolls so I quiver in a corner and shut up. The way for Edwin Vassallo to do his job is to ask the same questions of his leader and make sure he gets a satisfactory answer.

Previous:THE SUNDAY TIMES: A way out of meltdown
Next:Tonight’s vigil