Sent in by Spartacus: 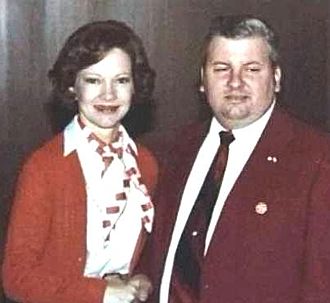 What you are looking at is a photo of two persons shaking hands. There is nothing so special about it. They are smiling and seem to be so content in each other’s company. This is what the picture imparts.  But for all those who are unfamiliar with these two persons, let me tell you who these two persons really are.  On the left is Rosalynn Carter. She was then the First Lady in the USA, i.e. the wife of President Jimmy Carter.

On her right is another notable person.  He is John Wayne Gacy.

The date is May 6th, 1978.  An important date; not for Ms Carter but for Mr Gacy.  This photo was taken six years after his first murder and seven months before his final arrest.  For all those not familiar with crime it would be appropriate to elaborate a little on this.  Gacy was accused of sodomizing boys and young men after which he would strangle them. He would then bury them in the crawl space. He was sentenced to life imprisonment.

Now, nobody in his right state of mind, with all his faculties working correctly, would ever think that Ms. Carter was ever involved in Gacy’s murders.

Nobody, i.e., except Jurgen Fenech’s mum.  According to her, all those shaking hands with alleged criminals are potentially criminals themselves.  If by any chance there happens to be a photo of you shaking hands with Ted Bundy, or Peter Kurten, or Heinrich Himmler, even if at that time they were nobody, you would be identified as one of them.

All those who have opened a bottle of champagne to celebrate the pitiful photo published by Yorgen Fenech’s mum are advised not to drink it.  They will be drinking only water.