The mess of the new AG appointment 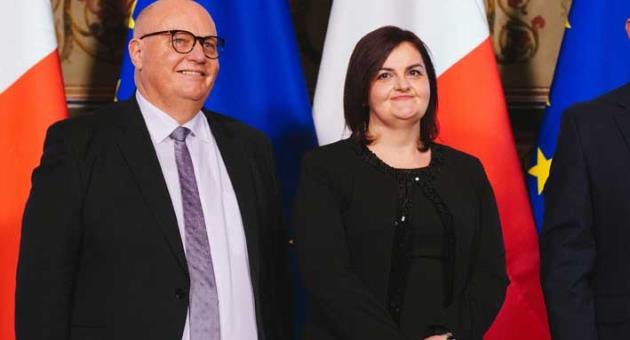 Victoria Buttigieg has been appointed Attorney General to replace Peter Grech. “Replace” is right. Some might say Peter Grech’s clone has taken office. This is a mess of incredible proportions and I’ll try to explain why.

Some attributed that to the contradiction in the role. The paralysis was in reality mostly due to the fact that Peter Grech does not have a backbone underneath it all. But in any case it was thought that separating the roles would help make sure who’s who and since the lawyer advising the government would not also be the lawyer who might decide that government ministers should be prosecuted, it might prove easier for the chief prosecutor to do their job.

So, like a rib ripped out of Adam, a new role was carved out of the job of Attorney General and the State Advocate was created.

At the time Victoria Buttigieg was number two in the Attorney General’s office. She got the job as the first State Advocate.

The transition sort of made sense. Victoria Buttigieg did not focus on criminal matters when she worked at the AG’s office. She focused rather on being the government’s lawyer and she continued to be that in her new role.

Today she’s reverted back to the office of the Attorney General where she’s now boss and chief prosecutor.

Matthew Caruana Galizia, who can flip through the records of emails from Electrogas that were leaked to his mother shortly before she was killed because he’s had over two years to study them well, has just published an extract where in her effort to represent what she must have felt was the interest of the government, Victoria Buttigieg helped formulate and facilitate the conclusion of the government’s corrupt contract with Electrogas.

Matthew Caruana Galizia explains in his Facebook post that Victoria Buttigieg’s “opinion” allowed Konrad Mizzi to sign the Electrogas deal without referring further to cabinet and parliament. This is what allowed all those ministers – chief among them Edward Scicluna – to say they never discussed or approved the Electrogas contract in government.

It’s why we have all those little Pilates washing their hands at the public inquiry of Konrad Mizzi’s wheeling and dealing.

Now why is this important? Because the evidence Matthew Caruana Galizia is referring to here is fundamental to the prosecution’s case against Yorgen Fenech. Electrogas was the motive for the assassination of Daphne Caruana Galizia. The emails she got before she was killed show the corruption her murder needed to cover up. Matthew Caruana Galizia becomes more than an interested party as the victim’s next of kin. He is a witness for the prosecution, the one that can provide the evidence of the emails his mother received and her killer wanted forgotten.

Victoria Buttigieg, now chief prosecutor, features in those emails and she’s now unacceptably close to the most important criminal case this democracy has ever had to face.

We’re back to a situation where Victoria Buttigieg’s role as counsel to government (when she was advising Konrad Mizzi about how to get away with signing the Electrogas contract without reference to higher bodies like cabinet or parliament) is in direct contradiction with her role as prosecutor (when now she’s supposed to prove that the corruption in the Electrogas contract was the motive, that together with the opportunity of hiring Melvyn Theuma and the means to pay for the assassination, amount to the totality of the case she needs to make against Yorgen Fenech).

This conflict is paralysing. The Attorney General’s office is not big as all that. The notion of any Chinese walls between its boss and the lawyers working on the prosecution of the case of their careers is a sick joke.

Saying she should not have pitched for the job given her involvement with the Electrogas case is neither here nor there. The decision to appoint her was the government’s that has thrown out the spirit of the reason for those constitutional changes to separate the AG’s paradoxical roles and appointed someone imprisoned by that same paradox.

When information from those Electrogas emails comes out – like when we learnt the government got Enemalta to absorb €40 million properly due by Electrogas, and now understanding how Peter Grech and Victoria Buttigieg helped Konrad Mizzi avoid the scrutiny at least of his cabinet colleagues – we understand just how hot that record of emails was.

Daphne Caruana Galizia may never have known just how much was in those emails. But Yorgen Fenech did know. There was so much he needed to hide. After all the help he got from all those people, whether ‘brothers’ of his Joseph Muscat and Keith Schembri, or beneficiaries of his bribery like Konrad Mizzi or useful idiots in the civil service keen to serve their political masters right or wrong, a pesky journalist that would not shut up was going to throw it all up in the air.

So he threw her up in the air instead.

But it takes two to tango. The emails uncover what Yorgen Fenech was up to, but they also uncover his accomplices and those who knowingly or unwittingly served his nefarious purposes.

And now, reading one more email, we learn one of them is chief prosecutor of the land.

Will we ever get out of this?

Previous:LISTEN: Interview with Kenneth Rijock: “Fear and Loathing at the Door”
Next:Sharing secrets