Yesterday the Sunday Times of Malta and Malta Today ran a story together naming individuals in Malta’s criminal underworld, explaining their alleged involvement in the assassination of Daphne Caruana Galizia, but also their involvement in organised crime by giving specific examples of crimes they are or have allegedly been involved in. 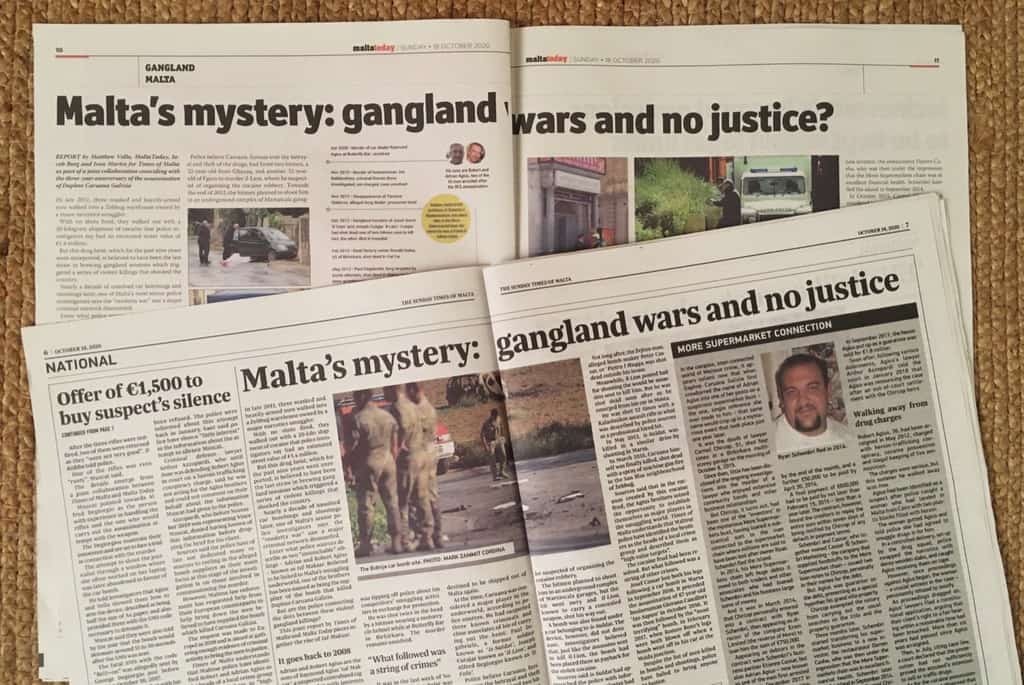 The name ‘tal-Maksar’ has been around for some time and the investigation conducted by Jacob Borg, Ivan Martin and Matthew Vella puts together elements that have been known for some time with new facts they reveal.

There is the temptation to overlook the significance of this. I think that some observations ought to be drawn.

First, the one that should be the most obvious. People allegedly involved in killing Daphne Caruana Galizia continue to walk free three years after the murder.

The police have known about these people for a long time and yet they have not charged them. They roam freely. This in itself has other implications. It is not merely unfair because some conspirators have been charged and others haven’t, which is of course a point that needs making. It continues to leave the opportunity of the tampering with evidence to the point where the evidence needed to convict them may be destroyed.

Then there’s the missed opportunity of breaking up a criminal gang, allowing it to consolidate and operate when murder charges could at least disrupt their activities. And it also gives the people who are under preventive custody the argument that their bail applications cannot be considered because the police did not act on information on their accomplices, giving them possible grounds to argue administrative abuse.

The second observation is that as with the arrest of Yorgen Fenech, the press had to step up to put pressure on the authorities to act on solid information which they have had for a long period of time. The police may or may not have legitimate reasons not to have done these arrests yet.

But we know that the reasons Melvin Theuma and Yorgen Fenech were allowed to roam about for as long as they did were not legitimate. They were a result of political interference by the prime minister, the leaks of official secrets to the criminals allegedly involved by the prime minister’s chief of staff, failure of cooperation between the Malta police and their international counterparts, the interference, allegedly on a corrupt basis, of the police chief in the investigation, the friendship between the chief of the investigation and the principal murder suspect, and so on.

When the institutions were keeping Melvin Theuma and Yorgen Fenech safe, beyond the reach of justice, reporting in the local and international press forced the hand of the police and cleared the path to some form of due process.

Yesterday’s Maksar story shows us that very likely the police have not learnt much from that lesson.

The third observation is that this is dangerous reporting. Very dangerous. If the reasons for the police’s failure to charge the Maksars with complicity in the murder of Daphne Caruana Galizia are not legitimate police reasons, the first illegitimate reason that comes to mind is fear. The allegation is that these people kill to get their way. We are talking about proper mafiosi with access to lethal weapons and resources which they have allegedly used to push out of their way people they perceive as obstacles to their objectives.

Although no doubt the collaboration between Sunday Times of Malta and Malta Today had the journalistic effect of letting three reporters share their sources and pool in the information that each of them had to piece together important facts, background and revelations, there is a greater significance to this.

Three reporters and two newspapers reporting the same story is somewhat safer than a journalist working on their own. In working together, they are also spreading thinner the risk of retribution. This does not mean they are not in danger or that the risk they have taken is obviated. It means things would be worse had this been the work of someone who could be reached alone, like Daphne Caruana Galizia has been.

That then, is my fourth observation. This too is a legacy of Daphne to journalism in Malta. Journalists are determined to dig in the ugly underbelly of Malta, but they are holding hands as they do that. But that’s not enough to mitigate the risks they take.

Malta still does not have a policy that sets objective criteria to decide when journalists need protection. Even reporting on mafiosi escaping justice on a murder, bombings, smuggling and what not, does not automatically start wheels of security provision for the journalists that stick their necks out.

The effect is almost opposite, ironically. Journalists reporting on criminal impunity make the police look bad, the same police who exclusively decide whether a journalist needs protection.

Jacob Borg, Ivan Martin and Matthew Vella could have just as well taken the easy and some would say the safe way out and not written their report. They would still get their pay cheque at the end of the month. But they provided the public with a service: that’s not just by telling the public things they would not otherwise have known. They also put pressure on the authorities to take some very nasty individuals out of circulation, making us all safer in the process.

They deserve more than our respect. They deserve our call as citizens for their protection. It is a good thing that they have become each other’s media security detail. But the risk that is not enough is real. Look what happened to Daphne.