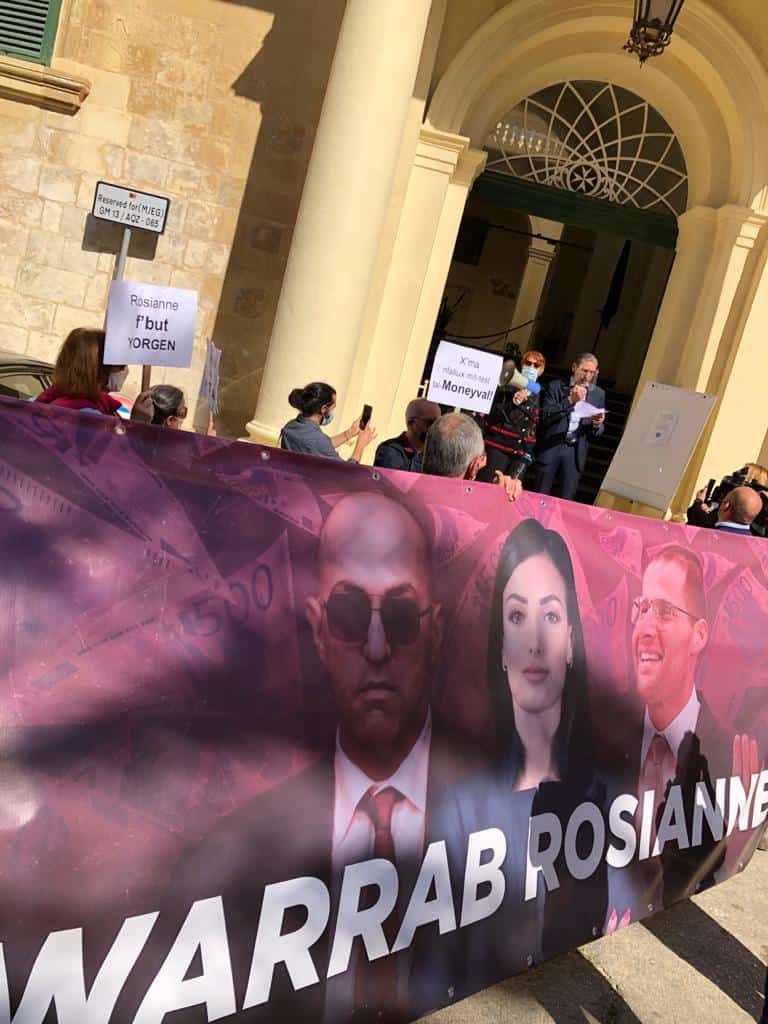 Her departure from government is long overdue. She is trying to present her resignation today as temporary . She says she’ll clear her name and since Robert Abela has not gone as far as firing her, there might be something in that plan.

She’s already started her campaigning for her return to government. Here she is posting in her own name some praise addressed to herself. She obviously intended to use a fake profile. Not just rotten. She’s an idiot as well.

She might be hoping that with her resignation the heat would blow over and she could be allowed back in like Justyne Caruana before her.

Justyne Caruana resigned after her husband at the time, Silvio Valletta, was discovered to have had a rather embarrassing bromance going on with Yorgen Fenech. The bromance was consequential because Silvio Valletta kept it up while he was heading the murder investigation that identified him as chief suspect in Daphne’s murder. Justyne Caruana insisted she never knew this was going on. She was forced to resign. And when the heat blew over – or so the government believed – she was allowed back in.

Rosianne Cutajar had some form of relationship with Yorgen Fenech during the same 2018-2019 time period when the man since charged with killing Daphne had already been outed as the owner of 17 Black and therefore the man who bribed Keith Schembri and Konrad Mizzi. Whatever form the relationship took it included payments of large sums in cash even as she voted and spoke in her Parliamentary role in defence of Yorgen Fenech without telling anyone of her relationship with him.

Even the normally obtuse government perceived the anger about this growing in public opinion. Yesterday night on TVM I reminded Manuel Mallia he was one of the few Ministers to resign from a Labour government. That was after his driver had shot a gun in the street. I told Manuel Mallia it seems that Ministers are forced to resign by Labour prime ministers only if the wrongdoing they are responsible for is not in the service of Yorgen Fenech. I was explicitly referring to Rosianne Cutajar’s inexplicable political survival.

Repubblika took up this case with all the forcefulness that could be mustered within covid restrictions. Even as protesters went to her office yesterday, her staff were calling her Qormi constituents asking them if “they needed anything”. Until yesterday at least she still hoped to survive this. And the rest of the government continued to back her. Yesterday’s TVM news ignored Repubblika’s protest altogether continuing what TVM did during the 2019 protests which it ignored until it needed to give its audience a reason why Joseph Muscat resigned.

A lot doesn’t work properly in this country but it is of some comfort that the contribution civil society can make when our governments and institutions fail remains important. November and December 2019 were no freak accident.

Politicians are perhaps and certainly in spite of themselves understanding they cannot ignore the voice of citizens demanding nothing more than clean government. Maybe I am being optimistic here and tomorrow, I know, I’ll feel differently.