Perhaps the strongest case for the argument that the institutions of this country do not work the way they should, was Robert Abela’s press conference yesterday.

In this post, Alessandra Dee Crespo, brought up the sense of deja vu we felt watching it.

She matched yesterday’s charade with the press conference Joseph Muscat had given the afternoon Daphne Caruana Galizia was killed. I would also match it with another press conference Joseph Muscat gave a few weeks after that, the day Vince Muscat and 9 other people were arrested and he and two others started the legal journey that in his case ended with his admission and sentencing in court yesterday.

Martina Farrugia eloquently summed up the reasons why Robert Abela’s claim that the sentencing of Vince Muscat suggest in any way that our institutions work is utter bullshit. So I don’t have to do that again.

I would add one particular point that Robert Abela made in his puerile attempt to cash credit at the expense of the institutions he claimed to be praising. He said the government had “made the necessary reforms for the institutions to work and yield results.”

Pardon me, but which reforms led to the conviction of Vince Muscat? Vince Muscat has been begging the police for a plea bargain since April 2018. He’s been spilling his guts in several police interviews since then. Nothing, nothing has changed in our policing or in the justice system that has made a smidgen of difference to anything or anyone.

Secondary to the case Martina Farrugia makes about the polished brass neck of Robert Abela is another concern. Does Robert Abela genuinely believe our institutions are working and capable of fighting serious crime, corruption and organised crime? Or does he just want the world to believe that, even if he knows it is not true? That would explain why he awkwardly switched to English at one point during yesterday’s press conference.

Either way, this is a dangerous official denial of reality. It was like watching an inebriated addict slurring the bold claim that they don’t have an alcohol problem.

How can we hope the Maltese State can ever be capable of defeating the mafia if it continues to deny it even exists?

How can we hope the State’s institutions are focused on eradicating the octopus that has gripped our country, after watching the prime minister speaking as if he thought yesterday was a good day to congratulate himself?

I mean really. All they managed to achieve concretely 41 months after the vilest outrage against Maltese democracy and the untimely killing of a journalist, a servant of the State, and a woman, a mother, a wife, a daughter and a sister, was a pathetic 15-year jail term for someone who admitted their guilt.

This is not about the police officers, the prosecutors, the magistrates, the lawyers, the judges, the prison warders and all the people who risk their lives on the frontline making the best with what they have.

Certainly, we hope that yesterday’s developments could inch us closer to justice. But hope is all we’ve had for over 3 years now. We never hoped that a killer would get away with a light sentence of 15 years because I’m sorry if I’m sounding like a right-wing disciplinarian all of a sudden but to me, 15 years for cold-blooded murder for money, participation in a mafia conspiracy, and an act of terrorism against democracy and the state, is sweet fuck all.

Hope is no reason for congratulations. It is no reassurance that this country is capable or willing to fight organised crime. Hope is the tenuous, desperate relationship we still have with this country we used to think belonged to us but we have since learned really belongs to Yorgen Fenech and his rarified club of multi-millionaire, tower-building, politician-bribing, public-contract-hogging playboys.

He got to decide what l-orizzont publishes. He fully expected to decide who gets elected by the Maltese people to the European Parliament. And he still expects reporters at Times of Malta to take his money and make him look good.

How can we keep our hopes up through all this bloody mud? The fact that we have only one dead certainty. The fact that if we stopped insisting on justice, il-Koħħu wouldn’t have to worry about how he’s going to stay safe for the next 6 years in prison and for what’s left of his miserable, wicked existence after that.

It’s not like we’re going to start congratulating ourselves for achieving that much. We’re not in pursuit of congratulations. We’re assuaging our conscience for allowing Daphne to be killed alone. That’s a lifetime of work. So the Degiorgios, the Fenechs, the Agiuses and the Vellas, the Cutajars, the Vallettas, the Cardonas, the Mizzis, the Schembris, the Muscats, the Cutajars, the Portellis, the Delias, the Zammit Lewises and the Abelas of this world can be dead certain of one thing.

We’ve barely started. And since the institutions are not working the way they should, we know it’s still a long way to anything like justice. 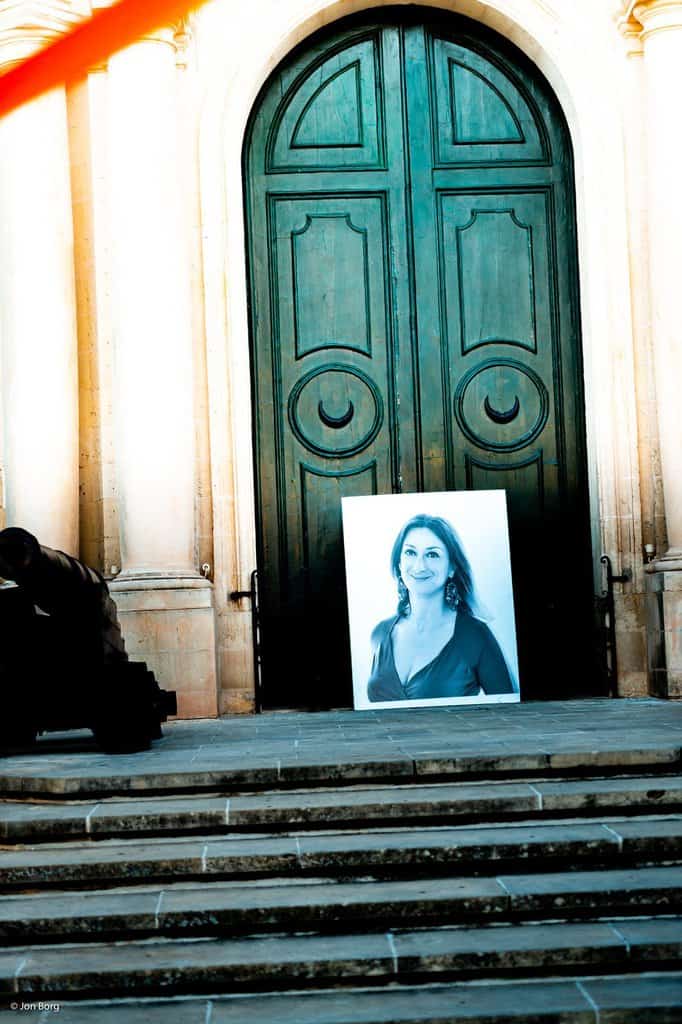