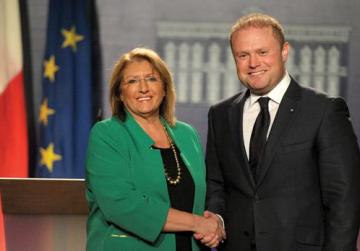 The third Godfather movie is unfairly maligned. Whatever your opinion is of Michael Corleone vainly seeking redemption, there’s a scene when Michael is trying to get his ex-wife to forgive him before heart disease kills him. She mocks his residual, self-servingly optimistic Catholic expectation that once you express regret for your sins, God will forgive you and your slate is clean. All the murders, the swindles, the evasion of the law goes away, like it never happened. Or so you’d like to think.

People who look for reasons to continue to support the Labour Party find solace in the promise of absolution in Marie Louise Coleiro Preca’s contrition in her responses to questions by Malta Today in the Easter edition of that newspaper.

The Labour Party needs some soul-searching, she said. And it needs to apologise to those people who believed it was a moral organisation.

I am not going to respond to Marie Louise Coleiro Preca with a reflection on her own personal conduct throughout the years she says the Labour Party needs to apologise for.

I am not going to review the conduct of her ministry under Joseph Muscat and how she fought tooth and nail to stay in the government before Joseph Muscat kicked her upstairs. I will not criticise her for her silence as revelations of corruption emerged. I will not even linger on that moment in January 2018 when she complained to ambassadors accredited to Malta that Daphne Caruana Galizia had spoiled the success of Joseph Muscat’s government by getting herself blown up in a car.

I will instead take a broader view of her comments. It won’t mean I’ll be less critical.

The Labour Party’s primary consideration is its survival. That’s the nature of political parties. The close second is power, winning it, staying on top. That too is the nature of political parties. Political groupings that do not aspire to govern, are pressure groups that run for elections as platforms for their opinions. The Labour Party is not about opinions. It’s about running the country just the way it likes to.

It is a stretch to say the Labour Party’s existence is threatened. And it’s almost as outlandish to imagine it losing the next general elections. But the Labour Party understands that there now is a breach in the trust between it and the electorate. This is not a ‘mistake’ or a ‘lie’ that seems ordinary for a certain type of politicians.

Although Marie Louise Coleiro Preca wouldn’t put it in such terms, this has been a hostile take-over of the country by a conspiracy of criminals camouflaged as Labour Party politicians. And they were enabled, harboured and protected by the Labour Party.

The first things those with a longer-term view of the survival of their Party are trying to achieve is that the Labour Party stops protecting this band of crooks. It’s already difficult for many to let go of Keith Schembri. It was almost (underline, almost) funny to read Alfred Grixti, when Keith Schembri was charged and detained, describe Joseph Muscat’s former chief of staff as some Antonio Gramsci, a political prisoner of the Nationalists. Alfred Grixti will need new gods to worship fast and Marie Louise Coleiro Preca is arguing for the erection of a new pantheon. She calls it “soul searching”.

It’s going to be harder of course to live down the memory of Joseph Muscat. I don’t know if it’s true at all but I remember in 2003 someone telling me what Alfred Grixti had said when the Labour Party lost that election. In a private conversation Alfred Grixti said that people in the Labour Party genuinely believed Alfred Sant’s assessment that the EU referendum result would be obviously followed by a victory for the Labour Party 6 weeks later.

How does one not learn to avoid following political leaders unquestioningly and blindingly off cliffs? Still, following Alfred Sant into electoral disasters is a poor comparison to following Keith Schembri into preventive custody on the back of charges for money laundering.

Followers of political parties need a hymn book from which to sing. It does not matter all that much if it contradicts every claim ever made.

You can fight in the streets for integration with Britain and claim credit for Malta’s independence. You can try and fail to extend British military presence in the country and then celebrate their departure as your achievement. You can stagnate an economy and smear the community with blood and campaign on a slogan for ‘peace and progress’. You can resist membership in the EU like the country’s existence depended on your success in that effort, and then spend the EU’s money like you worked for it.

Why is my reaction to a call from a Labour grand-dame for an apology so ‘negative’? Because an apology now that they’ve been caught doesn’t cut it. A resignation does not cut it. The early retirement of criminals is just not good enough.

At the President’s gathering a few weeks ago, Labour stalwart Anthony Degiovanni, he who used his office computer to slander Pieter Omtzigt, said we should not be exaggerating what has been happening in Malta. It’s not like we need a truth and reconciliation commission on the post-apartheid model, he said.

I’m not sure about a commission. The form, after all, is secondary. But we need the truth. And the truth is that no political party that facilitated criminals to take our country from us should be a political party at all. Saying sorry does not change that.

Is Marie Louise Coleiro Preca prepared to imagine a reality without the Labour Party?

I didn’t think so.