We don’t do it for the thanks 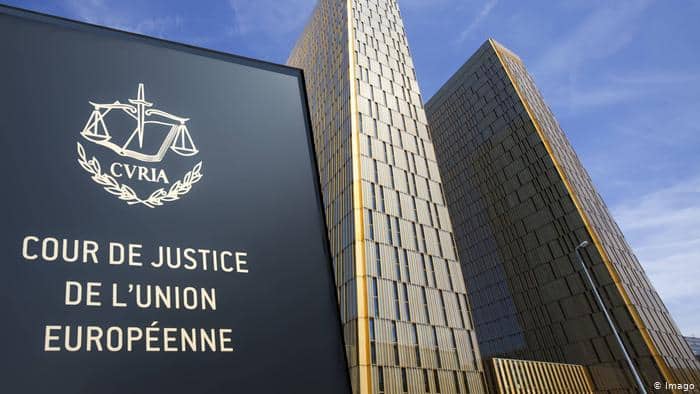 The European Court of Justice replied today to a request by a Maltese court hearing Repubblika’s case on judicial appointments. The obvious headline is the European Court did not agree with Repubblika that giving the prime minister of a country a decisive power when new judges are appointed is in breach of EU law.

The prime minister and his ministers and his propagandists are obviously running with that headline as some sort of vindication. Consider this post by Karl Stagno Navarra as representative of the spirit. 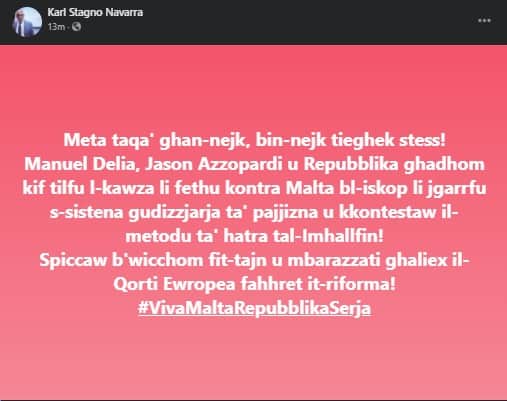 Of course, things are always a bit more complicated and you can look at things as they appear on the surface and be happy with that or look an inch deeper.

For the first time in Malta’s history, new members of the judiciary have been chosen by their peers, completely independently from the prime minister. That is what we set out to achieve. That is what we achieved.

The government can wallow today in its Pyrrhic victory but the fact is they had to do what we wanted them to do.

Secondly, this case is not over. The ECJ found that a decisive power when new judges are appointed in the hands of the prime minister needs an “independent body tasked with assessing candidates for judicial office and providing an opinion to that prime minister”. The court also lists a set of conditions that would have to be met for the method Malta used to be acceptable. The court did not examine whether those tests were met. The ECJ’s ruling now goes back to Malta’s court. The government would be well-advised not to smoke its cigar before the fat lady sings.

Thirdly, and this is a clincher, the European Court today established a new principle. It has declared unlawful the act of changing a country’s laws in a way that makes it less democratic. This has a far greater significance than the very specific case of Malta’s way of appointing judges, but more on that later.

In our case, this new pronouncement shows that the European Court was hesitant to say there’s a standard way of writing rules to ensure a European country is democratic. But no European country can lawfully make itself less democratic. This means that like it or not the changes Repubblika secured in the constitution to make sure the prime minister does not get to decide who the next judges are going to be cannot be taken back and reversed to our old and less democratic system of choosing judges.

That’s a serious win. It’s also a significant development in European law. The ECJ’s decision means that no European country can legislate to slide towards autocracy. The court ruled that legislating or acting in a way that reduces the protection of the rule of law would breach the Treaty.

Commenters and experts have described this ruling as “seminal”.

ECJ Case C-896/19: Key added value of this seminal Grand Chamber judgement is that ECJ has just solemnly established a NEW principle: the *principle of non-regression* when it comes to the #ruleoflaw based on joint reading of Articles 2 & 49 TEU (para 63)

Misleading take. ECJ didn’t assess Maltese gov’s #ruleoflaw record. Rather it held that as a matter of #EULaw, creation of a judicial appointment cttee is obviously ok *as long as *independent* + a PM involvement is ok *as long as* power is constrained/not exercised arbitrarily https://t.co/NGv5kaVRy8

Far from certifying the conduct of Malta’s government in appointing new judges, the European Court has set out a set of rules which a European government must follow when the executive have a decisive role in choosing judges. It left it to lower courts to examine whether those rules are being complied with.

The government today earned itself bragging rights. Repubblika achieved the liberation of our judiciary from the interference of this and all future governments. We have ensured that no present or future Joseph Muscat will be able to appoint judges and magistrates for no justifiable reason except their loyalty to his political party.

And we have made European legal history in ways that will be analysed and described in depth over the coming months. On our initiative, the Court has pushed the definition of democratic safeguards that now protect better us and every other citizen in Europe. Expect Karl Stagno Navarra to mock this. But what does he know?

I’ll take a page from Robert Abela today. We’re proud to have done this. There’s more where that came from.

We are glad that you appreciate that our hard work makes you look good, @RobertAbela_MT. https://t.co/S7ZVaKwEGB

Previous:GUEST POST: Will the Maltese electorate again endorse corruption?
Next:GUEST POST: Trapped by the rules of the game