GUEST POST: Denial is not just a river in Egypt 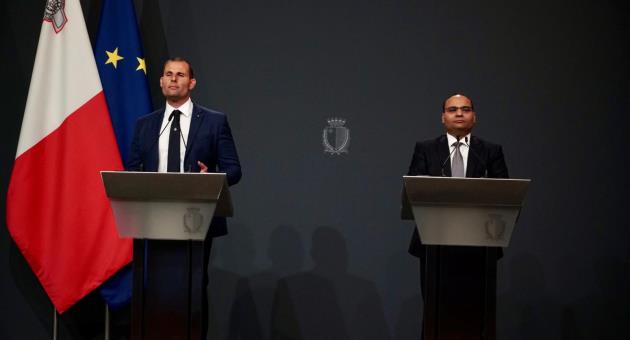 The title is borrowed from Mark Twain.

Last Wednesday, the Financial Action Task Force (FATF) published its decision to grey-list Malta, thus putting it on the same scale as Zimbabwe, Syria, Uganda and Sudan. Malta is the first member state of the European Union to be added to the money-laundering grey-list which could cause serious repercussions on the island’s economy. Prime Minister Robert Abela and his ministers deal with this by hiding behind the wool they pull over their eyes. They say they think the government can overcome Malta’s grey-listing. But their only solution appears to be camouflaging the problem.

Hours after the news on Malta’s grey-listing emerged, Abela, wearing his bravest boy scout face, told a press conference: “I feel this decision was not deserved. I feel this is unjust.” He insisted, pathetically, that a ‘majority’ of countries had not agreed with the FATF’s verdict.

Robert Abela sought to project an air of serenity during the press conference, even if his body language may have betrayed other sentiments at times. Finance Minister Clyde Caruana, helped out. He said grey-listing would have no impact on the government’s financial targets or the country’s economic growth projections. He insisted that “suggestions that the situation will have changed drastically – or even changed at all – when the sun rises tomorrow, are unfounded.”

However, FATF president Marcus Pleyer said that a stronger anti-money laundering framework is needed to strengthen Malta’s rule of law and the integrity of its financial system.

“Maltese authorities must not downplay the importance of these measures,” Pleyer said, as he highlighted three key points that need to be addressed to fight money laundering and tax evasion. Asked by a local media house why he felt the need to warn Malta not to take the measures lightly, Pleyer said he followed media reports from recent days and understood that “every country that moves on the grey list is not very happy but in the end, the government of Malta gave its clear political commitment to work together with the FATF to address all the deficiencies and this is just a signal for cooperation and I am very thankful for this commitment.”

A clear message to Robert Abela and his parrot ministers.

It could be that this is a part of his plan to keep his faithful unruffled. Reading certain social media posts may satisfy him, but the silent majority is far from convinced. The prime minister is in denial even though no amount of rhetoric and downplaying will solve the problem.

Malta’s ministers seem to agree with the prime minister’s assessment of the situation. They may consider the decision to be unmerited but still remain confident in the government’s ability to tackle this new challenge and emerge victorious as if this is a fight against an imaginary common enemy or windmills to be overcome by so many Don Quixotes.

Ministers’ responses to press questions were astonishing. “Labour is the party that delivers and it is what the Maltese need.” “We will keep on doing our best for Malta.” “Businesses will continue to find this government at their service.” “We will continue to work hard to bring foreign investment to generate business.”

It also is evident that Finance Minister Clyde Caruana is in denial, too. “We will not be reviewing our plans for economic growth or our financial targets.  I am certain that the country will continue to work.”

In bawling “unfair” they’re deliberately confusing the distinction between Moneyval and the FATF and insisting that passing one should have meant passing the other. They go further, stating that the only reason Malta failed to clear the second hurdle, was that big countries, jealous of Malta’s success, helped by local traitors poisoning everyone against their own country, decided to bully us. Ask to explain the causes of grey-listing one minister replied, “Ask Metsola and Bernard Grech.”

Foreign Minister Evarist Bartolo said Moneyval has stated the country was among the first to be largely compliant with the FATF’s recommendations. “We have changed laws and set up structures. We have really done a lot.” And that is the crux of the problem.  Moneyval looks at what’s on paper: did Malta pass the laws it was told to pass? Has the government employed enough compliance officers and trained investigators? Are the regulations robust on paper? Is that all the government did, ticked what they expected to look like enough boxes to claim they complied?

The government frantically fiddled with the checklist Moneyval handed it. But laws that live only on the paper they are written on are only the beginning. They must be enforced. Malta has had vigorous laws for decades. The problem is that every institution tasked with enforcing them was stuffed with political cronies, or politically compromised stooges like Lawrence Cutajar, Ian Abdilla, Ray Aquilina and Peter Grech who pledged loyalty to Joseph Muscat instead of doing their jobs. That is the reason we failed. The FATF does not just look at legislation, it looks deeply at how or whether these laws are enforced.

Why is Robert Abela compromising Malta’s future for the sake of crooks like Joseph Muscat, Konrad Mizzi, Chris Cardona and the bent cops who protected them? What grip do they have on him?

While Robert Abela sweats it out, Joseph Muscat is watching Euro 2020 football from a VIP box. It is clear that the FATF expect arraignments, such as the arraignments promised eight months ago by the Commissioner of Police who told journalists that by the end of last October important people would be in court to answer for money laundering at Pilatus Bank. Nothing happened. Mr Gafa should know that the FATF know that.

Robert Abela must do the right thing, for himself and for his country. He must leave behind partisan alliances and misguided loyalties. He must disown his predecessor and his gang. That is the only way he can manage to limit the damage to his country. It does not seem like he’s ready for that.

Previous:LONG READ: The purgatory of the unwanted
Next:GUEST POST: License to advise