Flowers grow back even after they are stepped on

Rosianne Cutajar who started as a newscaster on One TV in 2010, became Qormi’s Labour mayor in 2012 when she was 24-years old. Considered very close to the higher echelons of the then Labour leadership (led by Joseph Muscat and Keith Schembri) Cutajar’s political career developed swiftly moving rapidly from one lucrative government job to the other. Rumours have it that her familiarity with Keith Schembri helped her move from managing public relations for the CHOGM summit to assisting former parliamentary secretary Deborah Schembri.

Soon after her election to parliament in 2017, Cutajar was appointed Commissioner for Simplification and Reduction of Bureaucracy, boosting her income by €43,000. Then, in 2020, when Robert Abela defeated Chris Fearne for the Labour Party leadership and took over as prime minister, he promoted Cutajar to parliamentary secretary.

Then the story broke out that she acted as a broker, together with her associate Charles Farrugia, known as it-Tikka, for a €3 million property deal between Yorgen Fenech, accused of masterminding the assassination of journalist and blogger Daphne Caruana Galizia, and Joseph Camilleri the owner of a palazzo in Mdina. Yorgen Fenech called Cutajar as she was about to deliver €40,000 in cash to Farrugia to tell her that €9,000 of the money was for her – as a birthday present. She later confirmed that she and Yorgen Fenech were very close friends.

The Labour MP who at the time served as commissioner for reduction of bureaucracy met the 17 Black owner in August 2019 for the cash exchange as the parties in the property sale moved closer to signing the final deed. Cutajar is separately alleged to have taken a second cash broker’s fee of €46,500 from the same deal, this time paid to her by the owner of the Mdina property. Three months later, Fenech was arrested in connection with Daphne Caruana Galizia’s murder and the deal fell through.

Things got complicated when Green Eyes Ltd and owner Joseph Camilleri filed a judicial letter claiming that Cutajar and Farrugia pocketed €89,000 in brokerage fees by the owner of a Mdina property and asked to refund the money. Despite several requests, both verbally over the phone as well as through a letter from the lawyer representing the owner sent in July 2019, the court document states, Cutajar and Farrugia had failed to refund the money. The judicial letter was sent before the claim was time-barred.

The Commissioner for Standards in Public Life started investigating Rosianne Cutajar’s ethical conduct with Yorgen Fenech and the parliamentary secretary had to bow to pressure after reports by Times of Malta and other media. Cutajar uploaded a post on Facebook saying that she had been exposed to “several unfair attacks”, political spin and misleading comments. Robert Abela said he “welcomed the resignation, pending the outcome of the investigation.” After months, the report was concluded and found prima facie evidence of multiple ethics breaches. Just after the 200-page report, which included messages between Fenech and Cutajar, was made public Robert Abela informed Rosianne Cutajar that her ‘temporary resignation’ from cabinet had been confirmed and she would not be returning to office.

It is strange that contrary to his treatment of other cabinet members who were also found in breach of ethics – such as minister Carmelo Abela, prime minister Robert Abela immediately confirmed Cutajar’s dismissal after the Standards Commissioner found that she had tried to evade tax and had failed to declare income in her declaration of assets. Robert Abela also told Rosianne Cutajar that she must resolve her tax disputes or risk losing the support of the Labour Party. Rumours have it that the PL’s parliamentary group met and discussed, in her absence, Cutajar’s position and future within the group.

It was at this time that the knight in shining armour – it-Tikka – came to his friend’s rescue. It-Tikka sent a letter to Anġlu Farrugia, chairman of the parliamentary committee on public ethics, stating that he was the only person to receive the brokerage money and had paid €40,000 to the Inland Revenue Department. He enclosed a copy of the receipt.

As a result, Rosianne Cutajar did not have to change her story about never having received any brokerage fee. The whole issue can be put to bed. Or can it? Chats with Yorgen Fenech revealed that in fact, she did take the brokerage money. “Thank you for calling me. I was going to go and give him (it-Tikka) his money, and if you didn’t tell me about the €9,000 present for me I would have given it to him.”

Taking to Facebook Cutajar has defended her position saying she planned to stay on as a member of parliament. She said she had been elected to parliament by the voting public and had no intention of giving up her seat. She later updated her profile and said that “flowers can grow back even after they are stepped on.”

According to a terminal benefits scheme introduced for members of the cabinet in 2008 and secretly boosted twice by disgraced ex-Prime Minister Joseph Muscat before he stepped down, Rosianne Cutajar is reportedly being paid at least six months of her annual salary and allowances, as terminal benefits. That accounts for more than €30,000 of taxpayers money paid out as a bonus as a reward for her dismissal for ethical breaches and tax evasion.

The Commissioner’s report was discussed in the Parliamentary Ethics Committee where Glen Bedingfield and Edward Zammit Lewis defended Cutajar most vehemently. As expected, unbiased Anġlu Farrugia the ex-police inspector who in the eighties arrested a sixteen-year-old girl for protesting against the government and locked her in a rat-infested cell and forced her to sign a dictated confession did not have the courage to vote against Rosianne Cutajar during the Parliamentary Ethics Committee that he chairs.

The former deputy leader of the PL who claimed that he was shot six times in his back by his best friend Joseph Muscat and confessed to regularly seeing construction magnates going up the fourth floor of the glass palace has been paid handsomely by being made president of the house and by having his daughter appointed as a magistrate. Now to show his gratitude he has to lean towards the government in every decision he takes.

The case is now being investigated by the Commissioner for Revenue. The saga continues. 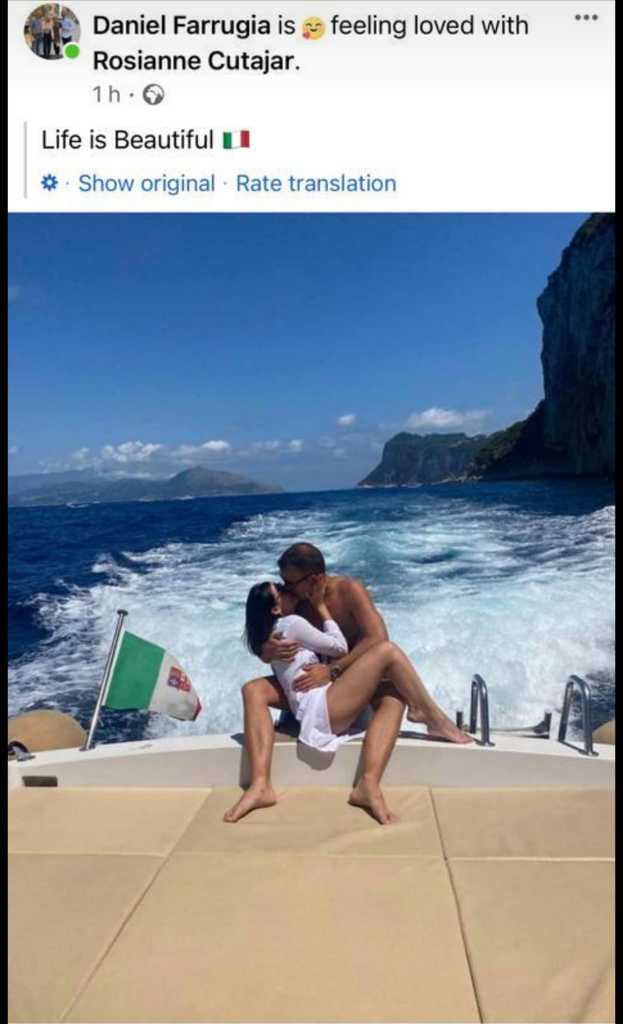