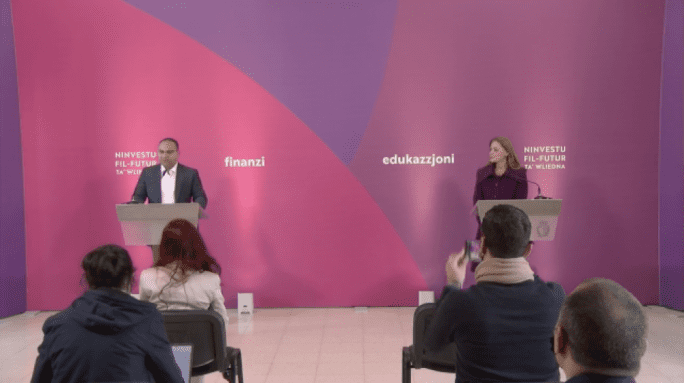 Just last week Clyde Caruana sounded like he knew what he was talking about. He was launching the national employment strategy, a subject on which he has considerable background having run Jobsplus before he was co-opted to Parliament and made finance minister.

Read this report of his speech at the time. The general gist is that our economy and our prospects of improvements to the quality of our life stand on the clay feet of weak education. In that speech Clyde Caruana lamented the fact that the high-quality jobs that are created are taken up by imported labour because there aren’t sufficiently skilled locals lined up for them. Too many people quit school early, he said.

“Education needs to be improved first,” before we can start thinking of cutting down on our working hours or having pipe dreams about working less and earning more. Clyde Caruana was blunt. He criticised politicians (though he now is one) for using “buzzwords” like ‘blockchain’ while doing nothing about the fact that too many leave school without even 6 ‘o’ levels.

“This is the elephant in the room we need to speak about… This is the reality, whether we like it or not. These things cannot be ignored if we want the country to advance,” Caruana said.

Now he’s finance minister. He’s one of the most powerful people in the country with the power to decide what comes first and where we go next. He’s more powerful than all ministers on an individual basis and he’s only subject to be overruled by the collective authority of the entire cabinet.

Did he use any of his power to address the elephant in the room? He didn’t. Instead, he continued to ignore education even though by his own account we need to stop doing that if we want the country to advance.

If you look at the projected expenditure in the education department for next year, you will see that the only increase is in the allocation to maintenance grants to students who are going to see their pocket money go up by 10%.

I’m not suggesting this is a bad thing. But the measure – that looks like it will cost around €10 million per year – does not even tickle the elephant in the room. The argument here is a bit like the one about free buses. Is the barrier to education today the fact that stipends paid to students in tertiary education are 10% less than they should be? Will this change persuade anyone who felt they could not afford a university degree to change their mind and go for it?

If yes, paying them more would be money well spent. It’s not likely to be yes.

The only other substantial increases are in budgets allocated to school transport (an additional €10 million) and after school services for children whose parents are working. These are positive initiatives that allow more parents to work and hopefully less parents driving their kids around in their cars in congested roads. But they are not measures that improve the quality of children’s education.

Even taking into account any possible benefit for increased access to tertiary education by increasing stipends, it feels to me that there are far greater barriers to continued education with an impact on a far greater number of children and young people that Clyde Caruana’s budget is doing nothing about.

Whatever shortfall we have in the quality of teacher training and resourcing, school infrastructure and access, research and innovation, specialist and focused learning, curriculum updating, and whatever else is needed so that our children get the same chance in life as children in the rest of Europe, we are still going to have next year. Because beyond increasing stipends there is no substantial increase projected in the operation of our education framework.

€10 million in EU funding is budgeted for the renovation of schools and another €9 million in EU funding is being spent on reducing schools’ carbon footprint. That’s all welcome. But using Clyde Caruana’s own metaphor we’re still ignoring the elephant in the room. Our children remain Europe’s intellectual orphans and they’re not going to get smarter with a fresh lick of paint.

Perhaps this too shows the gulf between Clyde Caruana’s talking and his doing.

Previous:Sometimes you need to shout it out loud
Next:WATCH: “Adapting laws to fight the mafia”