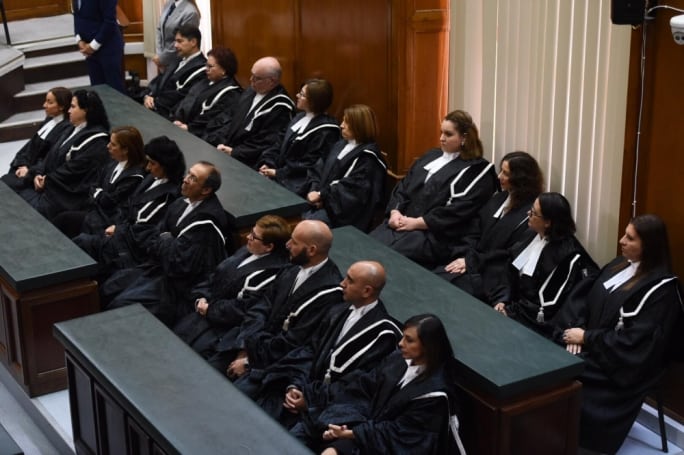 Apparently quite a few people were in the room when Magistrate Yana Micallef Stafrace thundered at Janice Chetcuti and called her behaviour as doing ‘worse than the worst criminal whore has ever done in my courtroom’, or words to that effect.

The magistrate reported the lawyer for – the Maltese text says – “joqgħodu jitbewwsu waqt seduta”. That has been translated to “kissed during a court sitting” though “joqgħodu jitbewwsu” does not paint a picture of “kissing” for me. It’s more like ‘making out’, ‘snogging’, ‘necking’, ‘playing tonsil hockey’, ‘sucking face’, ‘doing it Paris style’, ‘skipping first base’, ‘pashing’, ‘canoodling’, ‘swapping spit’. I know. I know. I’m trivialising this and perhaps hurtling too fast towards looking at the funny side of things when some people are still measuring life changing consequences from the incident.

Of course, ‘making out’ is inappropriate behaviour for a court room. But since Janice Chetcuti and her cousin weren’t exactly caught in the broom cupboard in flagrante delicto but where rather in the presence of a throng of other people, none of whom have been heard saying that they had seen anything remarkable, it seems clear that we can rule out inappropriate behaviour.

Janice Chetcuti has been grotesquely embarrassed by the incident. A reporter speaking to her on the phone reported she could hear the lawyer and politician “in tears” and this was some two weeks after the actual event.

I will not go into the dynamics of the kiss, not least because I didn’t see it, but no description I heard from anyone comes anywhere close to “joqgħodu jitbewwsu”.

Which would mean that the thundering call out from the Magistrate’s platform was entirely out of order, and if I may, abusive, given all the explicit references to whores, specifically ‘criminal whores’ (a pair of words that we’d do well to outgrow).

We are, however, short-changed by the reporting of the incident, and that’s not the fault of reporters. Janice Chetcuti has, rightly, had ample opportunity to explain the context, the facts as she recalled them, who kissed her, why, and how. If physically it wasn’t more pornographic than Judas greeting Jesus in the Gethsemane, the reason for the kiss (a delighted reunion of blood relatives) helped clarify in people’s minds the event. Reason gives context and leads to fairer judgement.

On the other hand, we haven’t heard Magistrate Micallef Stafrace’s side of the story. We don’t know what she thought she saw. If, perhaps, she misunderstood the dynamics. If perhaps there were prior episodes, perhaps involving other people, that may have coloured her judgement at the time. Who knows, maybe she made an innocent mistake, and caught herself rushing to precipitous judgement which she now regrets?

Aren’t magistrates human too? Do we really think they are incapable of error or of misinterpreting an incident? They are certainly expected to keep order and decorum in their chamber, so that’s part of her job. Aren’t we all sometimes caught being more zealous than we’d like to have been?

The annoying bit is that to retain their aura of wisdom, discernment, detachment, and cool judgement, judges and magistrates don’t explain themselves. They don’t justify their actions. And most of all they don’t apologise for them.

I can see why that makes sense most of the time. But if we’re not to expect of judges and magistrates to be superhuman and beyond error, why should they feel they have to expect it of themselves.

Look, if the facts of this incident with Janice Chetcuti are verified by witnesses to have been exactly as we seem to understand them now, that Magistrate Micallef Stafrace entirely misread the dynamics of harmless contact and used abusive language in complete ignorance of the facts, without some form of apology and climb down, Magistrate Micallef Stafrace’s career on the bench must stop here.

Some might say she should both apologise and resign. That would be a reasonable position to take given the explanations we have heard but since we have heard absolutely nothing from the magistrate, we may be missing any extenuating circumstances, and mitigating grounds, for Janice Chetcuti and the rest of us to accept the magistrate’s apology and move on.

Perhaps judges and magistrates should be helping each other out a bit and guide each other on when it is ok, even for them, to say they’re sorry.