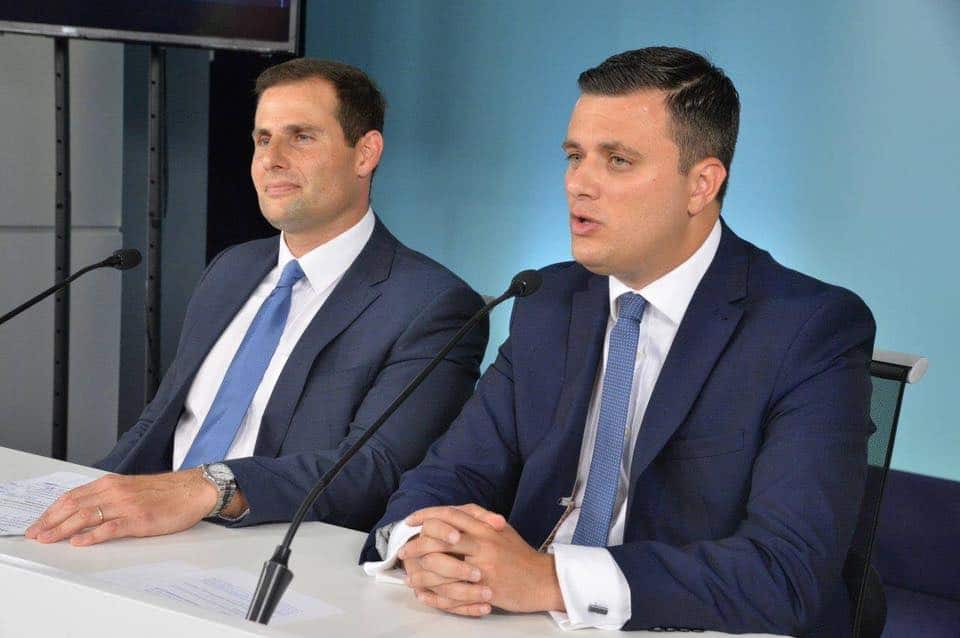 Byron Camilleri did a Joe Giglio on Andrew Azzopardi’s show yesterday. “Repubblika?” he scoffed, fiddling with his tie like Oliver Hardy in a sticky situation. “They’re just an extremist faction of the PN.”

Presumably without hearing him, Mark Said writing today in Times of Malta and The Malta Independent, presents Byron Camilleri with a response. It’s a tired cliché to accuse Repubblika of being a PN faction when it manifestly isn’t. That spin worked for a while until it stopped working. It was, frankly, best discredited by the PN itself so keen to appear distinct from Repubblika that it didn’t just focus on its own program and set of policies, it quit having policies at all. That’s one way of avoiding doubt.

The operative word in Byron Camilleri’s slander though is not the “faction of the PN” bit. Because even if he were right, what is he proposing, that the PN should be abolished and there should be no opposition at all? Nope. That’s not his point at all. His point is in the adjective “extremist”. It’s been used before by his colleague Miriam Dalli when speaking about Moviment Graffitti after their action removing deckchairs in Comino.

Extremist. You’d think they’re speaking about the Brigate Rosse. That we kidnapped ministers or judges and bombed train stations. What we did was always legal. There’s one sure way of knowing it and that is that if we ever so much as farted above the permitted stink we’d be in prison right now.

No doubt, in the context which Robert Abela’s ministers try to preserve, we are radical. It is radical to argue that ministers should not be bribed, the environment should not be debased, businesses should operate in a market governed by rules, judges should be impartial, public broadcasting should be fair, journalists should be unrestrained, civil servants should be empowered, and such other loony left notions. Arguing that we should be a democracy is nothing short of revolutionary.

Consider how Robert Abela’s finance minister complained a couple of days ago that most Maltese businesses pay no tax because they declare no profits. I’m going to give him a version of the “where were you when” taunts that I usually get whenever I speak out against public maladministration. Where was Clyde Caruana when Joseph Muscat said it was perfectly normal for a “businessman” like Keith Schembri to own hidden off-shore accounts in the BVI?

It was at the time considered extremist to argue that a businessman holding secret offshore accounts would have been using them to hide their profits from the local tax authorities. It was positively incendiary to suggest that that was an improper example when the businessman is also the prime minister’s chief of staff.

Clyde Caruana would not be seen dead next to extremists, certainly not when they, when we, were arguing that it was wrong (and suspiciously complicit) of the exalted “Leader” Joseph Muscat to use the office of the prime minister to give tax avoidance advice to the business community.

Where was Byron Camilleri? Nowhere near the extremists, that’s for sure. He was getting ready for his turn in power, promoting his policies of moderation.

Byron Camilleri holds back the army from rescuing lives. He orders forced repatriation of people running from hell. He plots with the chaotic regime of Libya inviting their navy inside Maltese waters to capture desperate people and haul them back to slavery. He protects for as long as he can a tyrant running the prison like a gulag, indifferent to mounting deaths in custody. He locked up migrants in a concentration camp for months on the pretext of covid denying them the basic rights afforded to everyone else living in this country.

Byron Camilleri is not an extremist faction of anything. He’s a fascist. That is reflected in his policies as a government minister as much as in his attitude towards any form of dissent, no matter how peacefully it is expressed.

He accuses Repubblika of being “selective” in its criticism. Of course, we are. That’s what being free is about, being able to choose what and who to criticise when without the sanction of the government. If the public finds gaps in the choices we make they can fill them up with their own criticism. There can be as many Repubblikas, as many independent and distinct NGOs as there are wrongs that need criticising. Every citizen is free to select their peeves, to organise themselves and to pursue whichever argument they choose.

Unless, as is the case here, the government is fascist and tolerates only uniformity, loyalty to its own edicts however wrongful or absurd. For a fascist it is the minister, the government, the dux who gets to select who can speak and when. The dux gets to rule who can stay within the fold of the polity and who is to be excoriated as an extremist, and ignored. Or worse.

Here’s an alternative view, Byron Camilleri. We’re the moderates. You’re the extremist. If it had been the other way round we’d be ignored. As things stand, given that you hold the monopoly on arms and violence in this country, nobody can ignore you.

Don’t think for a moment, Byron Camilleri, that we don’t take your threats seriously. We see your treatment of “undesirables” in every heavy-handed raid on the most disenfranchised and unrepresented people whose misfortune it is to be on their knees in front of you. We have seen the army, the police, the prosecution service, the judiciary, the prisons, and the entire legal edifice of the country abused to protect the people you owe your power to.

We do not fail to shiver at the thought of you turning your glassy glance on us. We know you. You’re a man of moral hollowness. With ease you resort to your powers, bereft of any semblance of empathy, whether it is to impose your will on a suicidal teenager in prison, on a starving migrant making ends meet, or on a four-year-old girl begging for water. When your vanilla One TV viewer calls us extremists we chuckle. When you go on radio to call us extremists we feel the chill. When you walk in the world, it is a little bit darker and a little bit colder.

But someone has to denounce your bullying and while you drown or hang the voices of your victims, ours will be the last protest you will hear fading. We are extremist that way. We don’t give up.