Adds link to background article of the original quote by Giancarlo Siani that inspired this cartoon. 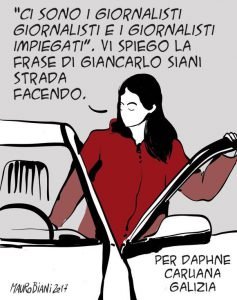 Here is a cartoon carried by Italian newspaper il manifesto in tribute to Daphne Caruana Galizia on the front page of its edition of the 18th. I missed this in the droves of media coverage of this disaster that has befallen us but the poignancy of the cartoon is so chilling it cannot be missed. 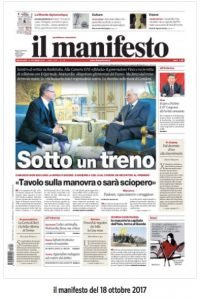 The cartoon says that if she had not been blow up in her car she might have told us the story of Giancarlo Siani. 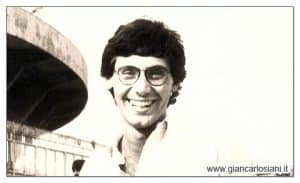 Visit this website to read his story but in summary Giancarlo Siani was executed by the Camorra in 1985 when as a freelance stringer he got uncomfortably close to understanding and explaining the relationship between organised crime and the police. Totò Riina, capo di tutti capi of the Sicilian mafia of which the Neapolitan Camorra of the time was a subsidiary, ordered his killing.

Like Daphne Caruana Galizia, Giancarlo Siani was frustrated by the formal press. He wrote for Il Mattino but his editors suppressed his work because they told him investigating criminals was the business of the police, not of the press. Any job he got, in the time before internet, was as a casual intern as the press would not touch the gravity of his investigations.

They considered his theories of corruption of local politicians by the mafia as wild-eyed fantasy and the product of irrepressible and unjustified anger at society. But when the mafia decided to have him off, the politicians that were consulted before the fact made no protest at the killing of a journalist who had stepped on their toes so many times.

They shot him in the back of his head, aged 26. He died alone, betrayed by a republic he sought only to serve. He was then proven right long years after his death.

Il manifesto paid tribute to Daphne Caruana Galizia and other journalists whose stories are too big for the incorporated media houses who have more to lose than their life. In her life they called her biċċa blogger intending to mean she was less than a journalist. In court they tried to argue her sources are not privileged because she worked outside the control of media houses politicians could browbeat into submission while acting on behalf of paymasters in the dark.

Update Follow this link for the back story behind the Giancarlo Siani quote that inspired this cartoon and the metaphor within it.