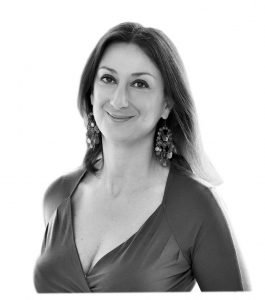 I wrote a few days ago that the problem with Daphne Caruana Galizia was there was only one of her. Now she’s there no more.

I wrote “Reading what otherwise sensible people are writing on Facebook about ‘shutting Daphne up’, ‘sweeping the blogger away’ and other frankly horrific notions reveals a stunning democratic immaturity. I do not expect these antidaphneites to don balaclavas to shoot Daphne Caruana Galizia like those evil, moralising idiots killed the Charlie Hebdo staff. But they sure are using their language.”

How wrong I was.

We have been asking ourselves about the health of our democracy. About the degradation of our freedom of speech. About the impunity of people in power. About the unanimity of politicians keen to cover up for each other.

We have left the sole defender of our freedom to speak for us alone, and we have let her die alone.

They have literally shot the messenger.

She is an example to the few left ready to die for basic decency, sincerity and justice. She was not keen on dying. But she would not be silenced except this way.

We will hear speeches of remorse and sympathy from many people. Many of them led her dehumanisation, her demonization to the point that whoever did this felt he was doing someone a favour.

When they shed their tears remember that even as they speak well of her, Daphne Caruana Galizia would have dug up their foibles, uncovered their sins, revealed their secrets and criticised them harshly for them.

If we did still have a combative democracy, not this fascist hegemony of power drugged by money and amnesia, we would call this an outrage against our democracy.

But this is just the logical conclusion we all refused to expect. The threats of those who want to rob us and rule over us at our expense and for their profit have finally come to pass.

But we tell them, with tears in our eyes and deep anger in our voices, we will not stand for this. We will fight back.

You must pay for this.