Get ready for a frame-up 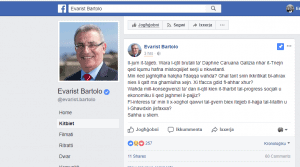 Pietru Pawl Busuttil passed on in good time not to see this happen a second time in his life.

Look at what Evarist Bartolo is worried about. That the myth of l-aqwa żmien, the fiction of a surplus, has now collapsed under the truth of the catastrophe this government has driven our country to.

Evarist Bartolo, and his boss Joseph Muscat, could never stomach the fact that Daphne Caruana Galizia’s agenda of truth could distract people away from their lies, their incompetence and their corruption. Throughout her journalistic life they spoke of her “agenda” and how it could not divert attention from their own. In her death, her ultimate sacrifice, Daphne Caruana Galizia’s agenda of truth has drowned the myth of the best of times and this inebriated illusion has transformed into a reality of the worst of times.

Previous:24HEURES: Front page cartoon that depicts how the world sees Malta now
Next:We have seen this before