When guardians rob their wards

“Malta is on the crest of a wave as evidenced by the new buildings being built all over the island. The Authorities have opened their doors and are giving building permits without delving too deeply into the parameters of building regulations they are meant to be upholding.

“Whereas previous administrations were possibly too careful and too strict in giving building permits, the policies of this administration have resulted in an enormous array of lifts and building machinery in most parts of Malta and Gozo.

“Whereas the previous administrations were busy checking the various building laws and regulations and taking their time to do so, the present administration has been quite quick in their researches and avoided dotting the Is and crossing the Ts.

“Most of us are sure that with a pro-business Prime Minister like Joseph Muscat the end of this marvellous building boom is nowhere in sight”.

Where do I begin?

The hypocrisy first. For years during the PN administrations this excuse for a human being slit his veins and threw himself in front of buses over what he repeatedly described as the PN government’s failure to protect the environment from excessive development. He is repeatedly on record criticising what was then MEPA for being lenient with developers when now he describes those times as being “too careful and too strict”.

Second, the egoism. Maurice Mizzi celebrates new buildings “in most parts of Malta and Gozo” but not in his back yard. He publicly protested an Appeals Board decision that allowed the development of a winery in his neighbourhood. Maurice Mizzi described the decision as “the beginning of the destruction” of one of the last truly rural villages on the island. “This will bring traffic, noise and disruption to what has until now been a quiet farming area,” he said.

He wouldn’t want that n 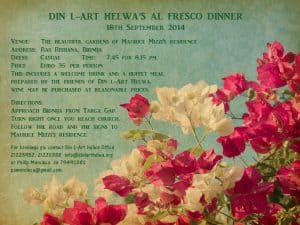 ow, would he? “Most parts of Malta and Gozo” can enjoy the traffic, noise and disruption while he can sit back in his famous Ras Riħana gardens in Bidnija where he hosts fundraisers for Din l-Art Ħelwa, of which his daughter in law is Vice-President. One has to wonder whether Din l-Art Ħelwa endorses their sponsor’s glee and enthusiasm for “this marvellous building boom”.

Third, the corruption. Barely nine months ago he was appointed by the Labour government “Guardian of Future Generations” the most pompous, highfalutin, bombastic balderdash of a title ever awarded to anyone by a republic. The government apparently gave him the task to promote sustainable development in the public sector and providing goals and direction to government bodies. Fine job he’s doing of that.

Here is Minister Jose Herrera telling Maurice Mizzi what is expected of him: “Sustainable principles should be integrated into the daily workings of the private and public sector. Future generations have a right to enjoy the same quality of life that we do today.”

Well Maurice Mizzi does not think so. Future generations can live in the squalor and congestion caused by over-development and can forget the natural and historical landscape their ancestors enjoyed (unless they live in Bidnija). They can benefit from Joseph Muscat’s “benevolence” that, in Maurice Mizzi’s own words “has been beneficial because most revenue (from developments permitted by the government) is straight profit”.

The Guardian of Future Generations is right royally shafting his wards for the straight profit he is getting today from a government’s benevolent indifference to our environment.

Future Generations will hate us as Germans of today, say, hate their great-grandparents for supporting the Nazis. We are spoiling their environment. We are robbing them of their wealth so we can profit today from resources that will be consumed before they are born. For being silent as this happens. For appointing depraved hypocrites ostensibly to guard their interests but really placed there to numb our conscience as we squander our children’s inheritance.

Previous:We accept too much
Next:THE SUNDAY TIMES: On economic bubbles