Antonio di Pietro: Beat the inertia of institutions and the consent of those that think ‘we’re ok’

This is my English translation of the speech by Antonio di Pietro at this evening’s civil society demonstration. 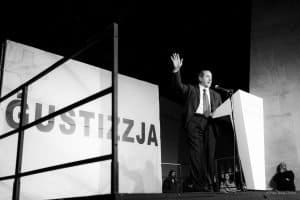 As you see even the skies have helped us. It stopped raining. We must have above all else the will and the courage to know that if we want to we will succeed.

Think: we will have normality the day those who like I have done, do their duty of revealing crimes committed by powerful people, are no longer newsworthy. You applaud me. But I only did my job. The builder makes homes. I was a magistrate that believed that everyone is equal before the law.

I therefore ask you to think: here, as in my country, there will be normality when placing a thief in prison is no longer newsworthy.

And now let me explain why I’m here. Why it is an honour for me to be here.

To start with to thank, in a moment of great solidarity, Daphne and her family’s sacrifice. Because I lived through difficult years in my country. People in my country who, like Daphne, did their duty, ended up killed.

I think of Falcone. I think of Borsellino. I think of many others. I too lived in fear of being killed. I realise what this person has suffered, and what her family suffers now, just for providing information.

I am here also to share my thoughts on what is happening here in Malta.

From the beginning of history Malta is a land like Italy. Malta has proved to be a bridge between civilisations. All civilisations passed through here. Malta is a crucial reference point.

When I was an MEP I thought Malta was an essential reality. It is a matter of pride that Malta is in the European Union.

I want to say this above all else: be careful. I have heard Malta being described as a Mafia State. Let’s not make this mistake. Italy and Malta are not Mafia States. They are states where there are Mafiosi that have taken possession of the State.

There is an enormous difference. Calling all of you parts of a Mafia State means accusing everyone so no one is found guilty. This would be the greatest mistake we could commit.

We should be proud of being in Malta, in Italy, in the European Union: to be in this world where we claim our freedom. We must be proud.

But we must remove the rotten apples in this basket.  If we don’t, we risk infection.

So you must realise how fundamentally important it is to secure democracy; to havepeople like Daphne and others who have the courage to denounce what is wrong.

So I am here to tell you (but not just you; I want to explain to those up there) not to commit the error of creating the belief that public opinion accepts this is a crime like any other.

I speak to you but I also want the others that are not here to know.  It has been possible in Italy to react because slowly this small crowd became an ocean. This small crowd realised their own freedom, their own democracy, their own rule of law were giving way to a Mafia State.

On this I want to warn against the mistake of thinking the Mafia is only made up of people going around with weapons or explosives. That is the Mafia execution. You cannot just be happy knowing who killed Daphne by placing the explosives. You need to expect to understandwho ordered the killing.

Many in my country, Italy, have been killed like Daphne for trying to explain it was not possible to remain silent.

This is why I am here. To invite all those in Malta who like me have lived through this experience to be here, to demonstrate every day.

I thank civil society for inviting me. This is a civil society that starts with 4 people. Then they become 44 and a 144. Today we’re already a crowd. Tomorrow you must become an ocean.

This is how you win freedom and justice.

I say this because in the days I have been here I too have done my own investigations. I have tried to understand what is happening in this country. And I understood one thing. There is an attempt to pass this matter for a simple incident.

But do you really think a chicken-thief could have placed that explosive the way they did?

This is the Mafia model. There’s smeone behind this who has ordered this killing.

But there’s another problem. If we continue to remain silent, allowing things to go over our heads, tomorrow there will be another Daphne, and another Daphne yet. We must prevent this.

But above all we must prevent the inertia of those who should be taking charge of the situation. And to prevent the consent of the population that says ‘well these things happen, after all, all in all we’re ok here’.

You cannot just accept to live with this.

We speak of democracy. But there’s only democracy if the law is respected. Otherwise it would not be a democracy. It would be an empire for the few who exploit the many.

I am here to testify in front of you that if you want to, you can. After that, as you could see in my country, you must fight every day. Because the Mafia is not a fever that goes away with medicine. It is a fever within society. We must isolate it everyday. And we cannot just wait for magistrates and policemen to arrive.

I am here because I saw in my country how democracy and the rule of law were being let go. There was a sense of collective resignation.

The Clean Hands inquiry and much more –magistrates like Falcone, Borsellino and many others who had their lives taken away; and many journalists killed: all this was to solicit a reaction from you.

It is a pleasure for me to be here and see all of you that want to react.

But a free society and the rule of law will be there the day you make the institutions do their duty. You must guard them every day.

This is what you cannot allow. They tell you they do not know how it happened, they cannot say why it happened. No. You already know. That type of homicide we have lived through in Italy as well. This is a contract killing, pre-ordained by those who did not want that voice to be heard anymore.

That is where we must get to.

This is why I am here: to thank her who did their duty and sufferred the consequences; to thank you for listening to me; to thank those who wanted me to express my thoughts; but above all to remind you the day those who do their duty are no longer seen as heroes will be the day of freedom.

The photos are by Paul Borg Olivier 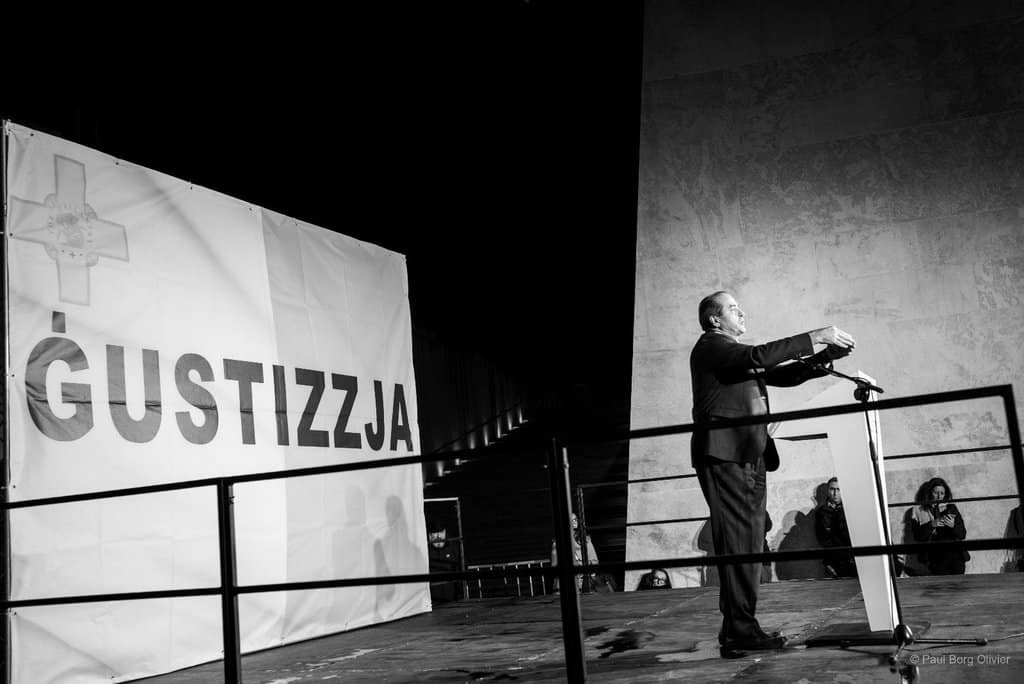 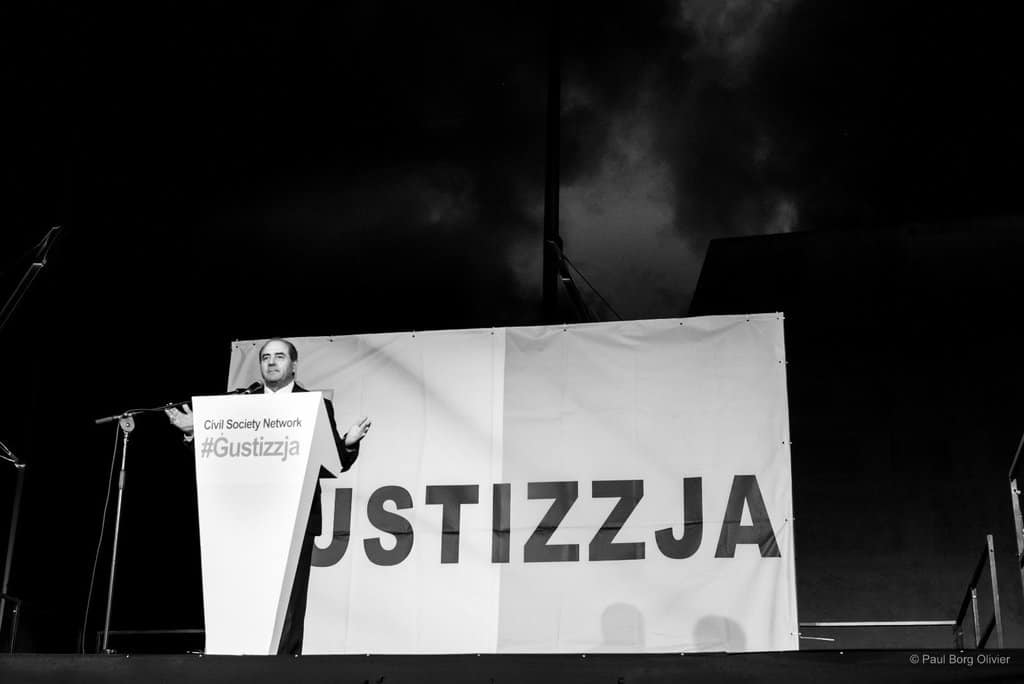 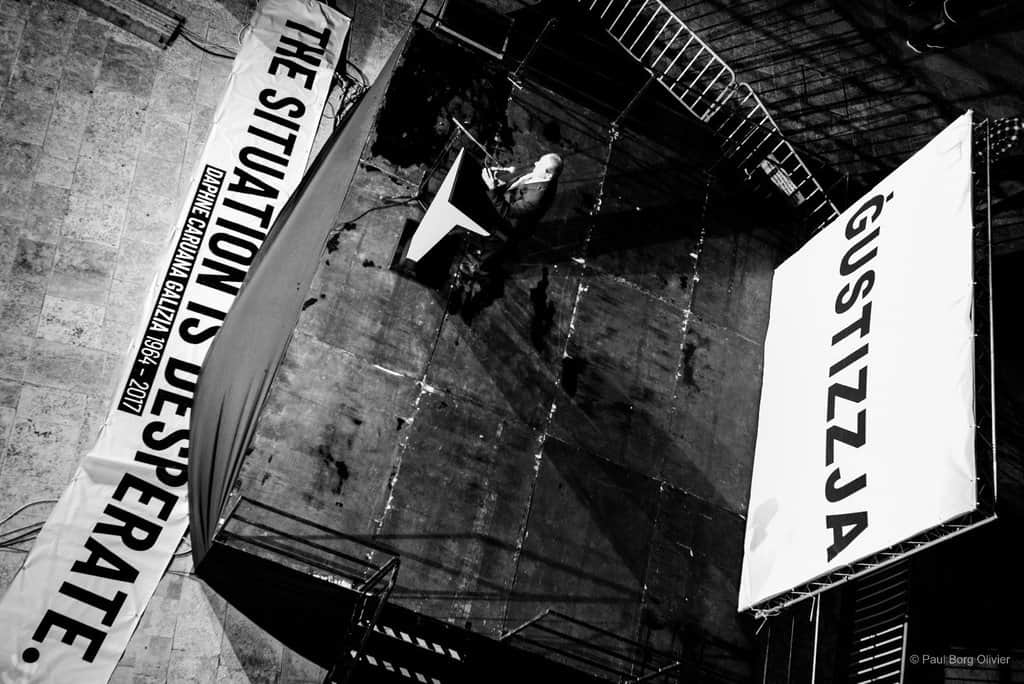