Daphne Caruana Galizia has been awarded an honorary Deutscher Reporterpreis for Investigative Journalism by Reporter-Forum in Berlin, Germany. The presentation took place at an awards ceremony this week attended by over 300 reporters and editors from German newspapers like Die Zeit, Der Spiegel, Frankfurter Allgemeine Zeitung, Suddeutsche Zeitung and others.

‘What those present will never forget: When veteran undercover reporter Günter Wallraff railed against the corrupt cartel on Malta. Or when presenter Claus Kleber asked the three sons of the murdered blogger Daphne Caruana Galizia to the stage. And when they climbed the steps, stunned by grief. When the audience got up and applauded for minutes — and how it was clear to many in the room that suddenly Europe is at stake, that we journalists will only exist together, that we must not stop illuminating the dark world of dirty money with our research. And how the three sons of Daphne Caruana Galizia came to Berlin to receive the honorary prize for investigative journalism.’

The presenter, German news anchor Claus Kleber, also announced the creation of a scholarship for the production of a feature in honour of Daphne Caruana Galizia and her work in text or film. Contributions to the scholarship are being collected until 31 December by Reporter-Forum. Any amount can be transferred to IBAN DE97200505501082210699, the account of Reporter-Forum at Hamburger Sparkasse, including the reference “Donation Galizia”. More details (in German) are available at www.reporter-forum.de. 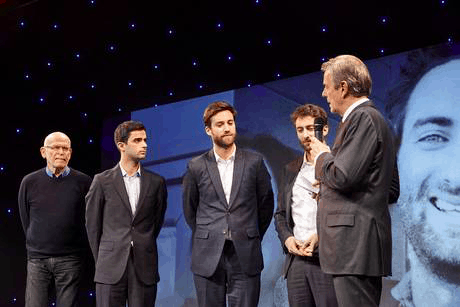