Benjamin Dalli: Malta is playing on the fringes of the European Charter of Human Rights

This is the speech delivered yesterday by Benjamin Dalli at the vigil for truth of justice, 8 months since Daphne Caruana Galizia was killed: 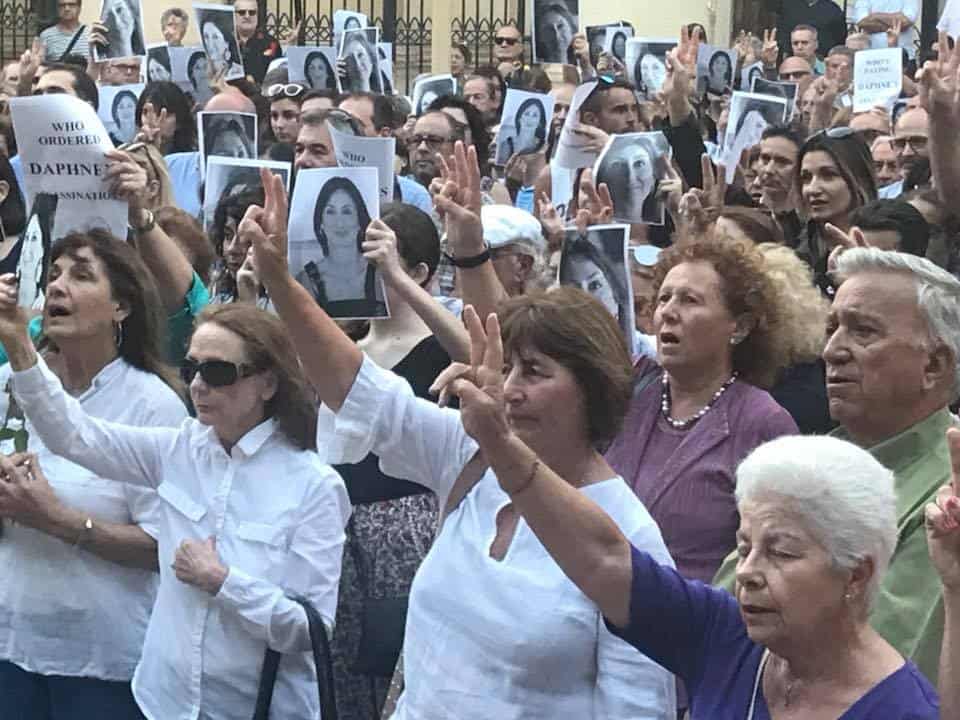 Walking into Valletta in the afternoon is an attack on the senses. The hostile stone and the harsh light is reminiscent of autocracies – the clenched fist with which they rule and the light which doesn’t guide, but blinds.

For fighting that hand, Daphne suffered terribly, and now her battle is our battle.

Malta is sliding in the democracy indices, pushed out by a pseudo-leadership, a paternalistic force whose seed was sown long before many of us were born, and is bearing its toxic fruit today.

Many say that our democracy is wholesome because of elections. But elections are a starting point: a mature democracy asks far more. Erdogan was elected by a majority, but that does not make Turkey a democratic country.

It is difficult to grasp our country’s nature if we cannot rely on our journalists. The political parties feed 98% of television audiences in Malta. There is no bridge between two polarised extremes, the dystopian blue and the utopian red are on different wavelengths.

Reality is lost in translation. Daphne Caruana Galizia stood for that inconvenient reality, and was killed because it interfered with meticulously crafted narratives. Because she was discordant with the unfaltering press releases, she was ousted by the mainstream media. And now, her battle is our battle.

Even after her murder, the government did not stop vilifying Daphne Caruana Galizia, which is a deeply disturbing fact. If her murder came as a shock, the government would have strived to convince the world of its goodwill. It would have done everything in its power to disassociate itself from the fact. It would have exerted its resources to prove Malta is not the absurd country its critics claim it to be. But in the end, it didn’t really seem to care.

Lest we forget, her murder poses direct threats to our human rights. It took 8 months for Silvio Valletta to be removed from the investigation. It took even longer for Maria Efimova’s basic security to be ensured.

The MEP delegation recommended that the inquiring magistrate be put exclusively on the investigation. So the government looks to promote him to prolong the case even further.

This is not what I was brought up to expect. We gather 8 months later to send the message: there is still a market for fundamental freedoms. The battle she waged to ensure them is now our battle to fight.

The MEP delegation reported that the investigation is stalling. The police are not chasing leads. This means that justice for Daphne is as further away as we feared. Maybe farther..

For people with a distorted sense of balance, it is always tempting to disassociate yourself from Daphne Caruana Galizia. She stood alone to face Malta’s toxic politics and fought it single-handedly – until the very end.

The proverbial baton she left behind that fateful day was picked up by individuals, fighting structures. To fight in civil society, we cannot be involved in elected politics. Because should we drop that baton now, we might not have the chance to pick it up again, not for another generation. We hope elected politicians do their bit. But as we ask them to, we must march our own march in the streets where even alone we will continue to speak up, even if our voice shakes.

This memorial reads “Who killed Daphne?”. Malta and its people killed Daphne, because we remained silent before her death. It may be too late for her, but it is not too late for Malta. Now, her battle is ours.