The behaviour of the guilty

Chris Cardona’s behaviour in trying to manage the troublesome law suit he initiated after Daphne Caruana Galizia reported 17 months ago he was in a brothel is the tactical behaviour of the guilty.

The innocent step up in a court of law, say why they feel libelled, present evidence that contradicts the claims made against them, express indication and seek for vindication as quickly as possible.

The guilty bully, evade, dodge and lie. And they use everything in their power to intimidate.

For the past 8 months, Chris Cardona has avoided all court sittings in this case. But he could not afford to withdraw the libel suit he filed against Daphne Caruana Galizia lest that would be construed as an admission.

But his lawyers were putting all sorts of pressure to have the heirs of the case agree to have the case withdrawn with some form of public apology.

The Caruana Galizias would have none of that.

For last Thursday, Chris Cardona and his lawyered pencilled another session of pressure.

They prepared to submit the image below to create a new narrative that Daphne Caruana Galizia, if no longer as they previously accused her a liar who invented the story, was misguided and misled by a source who could not have possibly known where Chris Cardona was.

This, they said, was because the message sent to her informing her Chris Cardona was in a German was sent from someone in Malta. To support this claim they published this image. 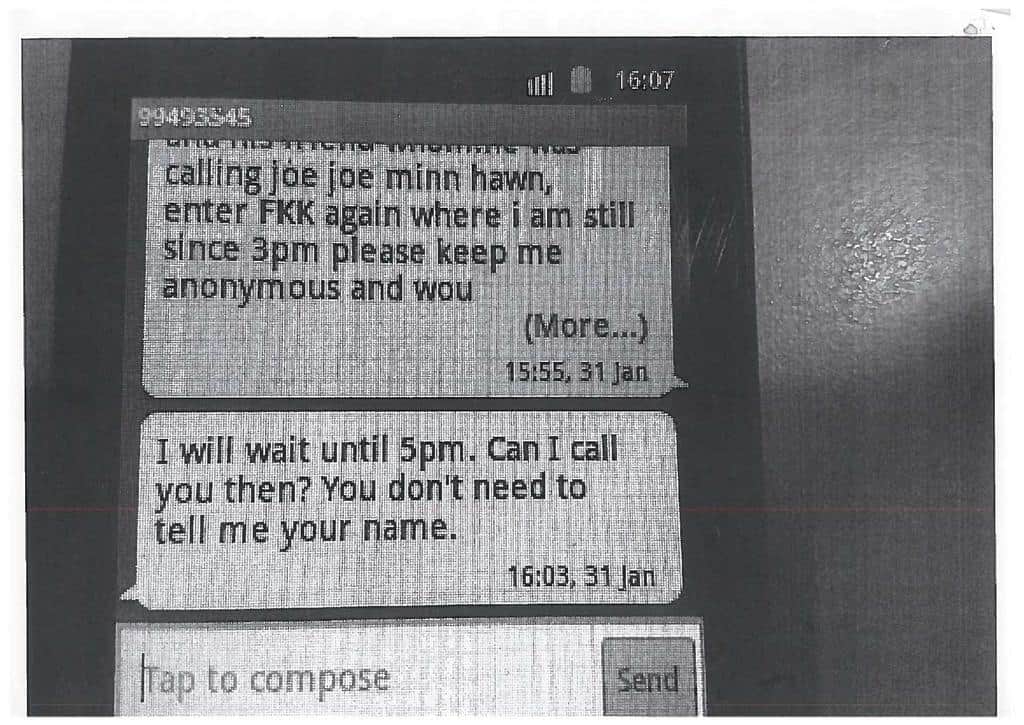 The photographed message is from 31 January while Daphne Caruana Galizia published the scandalous report of Chris Cardona’s brothel visits on the 30th of January. That’s when she published details about his tattoo, his swearing about a cold shower and all the other juicy details.

The photographed image shows the image is taken from the screen of the sender (the source), not the receiver (Daphne Caruana Galizia) because the sender’s messages are always on the right of their phone.

Quite why the source who is evidently taking precautions to cover their identity would then pass this image to Chris Cardona’s legal team is impossible to imagine. Unless of course Chris Cardona fabricated these messages or the images of them after Daphne Caruana Galizia published her first report.

The photo itself is not evidence that the purported messages are authentic. And asking the court 17 months after the fact to ask the phone operators to supply evidence of this from the record is, perhaps intentionally, demanding the impossible.

In any case here’s one I prepared earlier and this time, I can assure you, I know this is fake because I had it done myself. 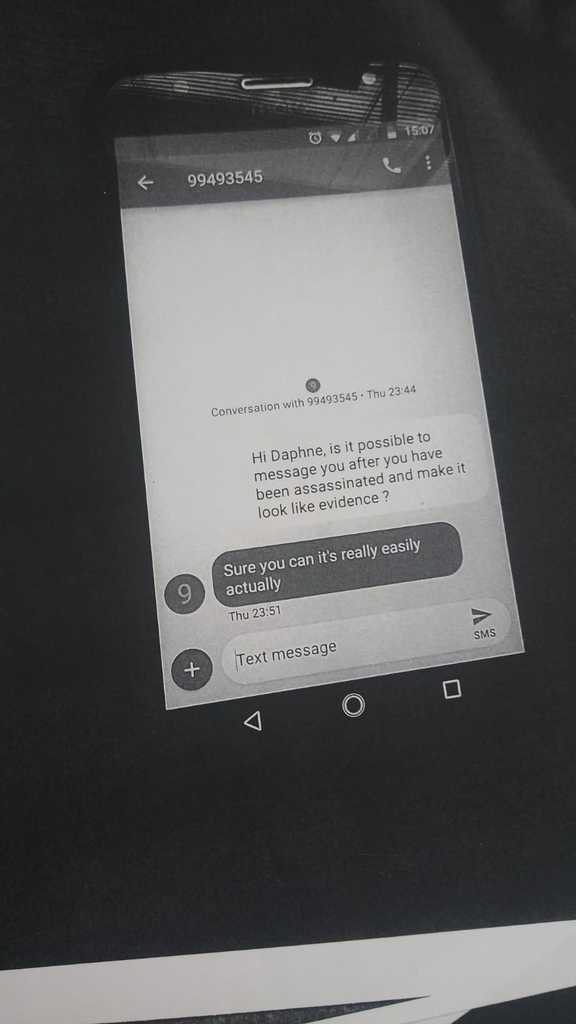 But here’s the real offence from the happenings of Thursday. That evening the government of Malta issued a statement on the official record of the Department of Information saying Chris Cardona missed court again because he was too busy.

But then read this: “It transpires that the defendant’s lawyer took up this opportunity to request the court to liberate the accused, in this case Daphne Caruana Galizia’s heirs, from the accusations against them and in the following procedure, Magistrate Francesco Depasquale decided to cancel the cases and remove them from the list of cases it presides over.”

Look at the language. The term “defendant” is technically appropriate for a civil suit. But the choice of the terms “accused” and “to liberate the accused from the accusations against them” are maliciously misleading.

But the use of the structures of the state — and an official government statement is one, as is the summons to appear as a witness in court when the three men live abroad and could not possibly testify to anything in this case — is an act of state-sponsored intimidation.

And it is a breach of the three men’s inalienable human rights.

But for the guilty no one deserves rights except themselves.