Blame it on the Usual Suspects 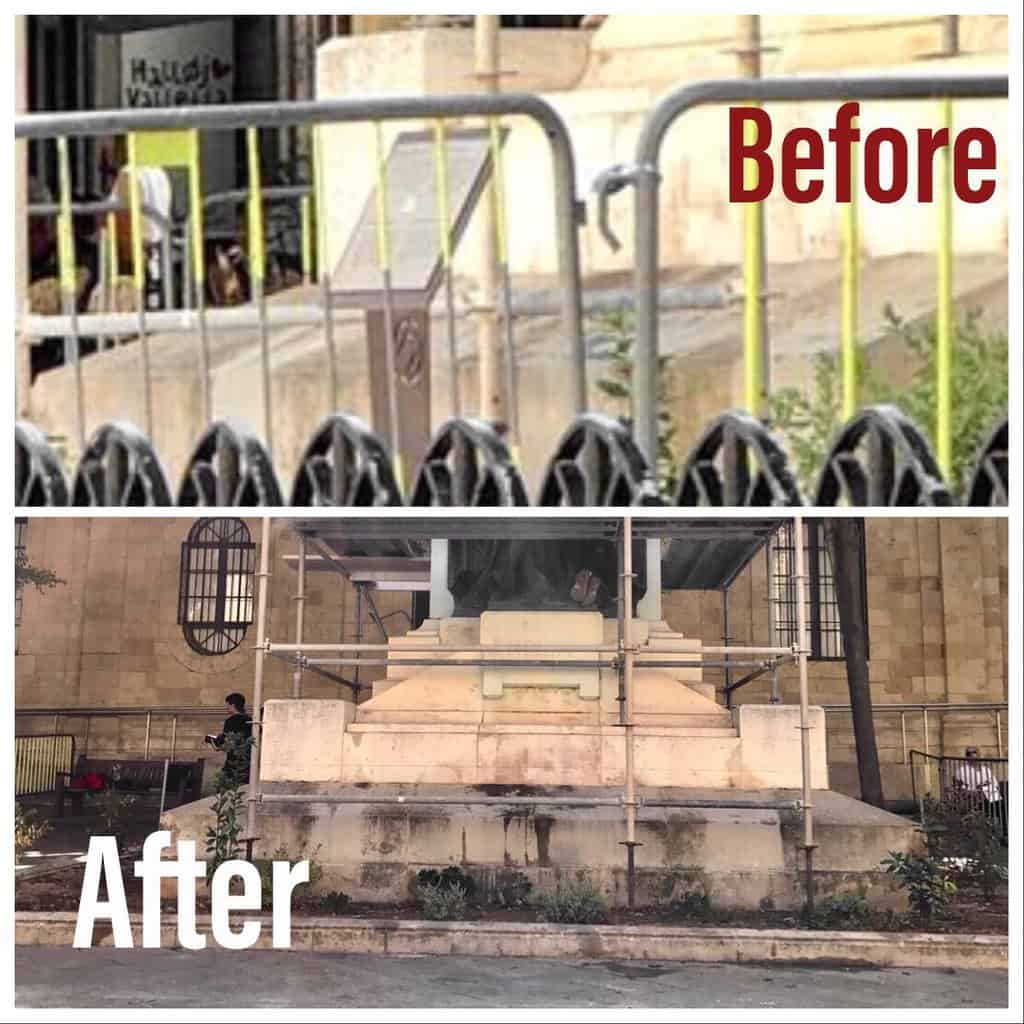 The government needed a pretext to push activists and protesters away from the Great Siege Memorial. They waited for the 8th September when no one would have made a fuss if they spruced up the place to have the Victory Day bacchanal and then said this is it.

Because they did not want to work on the weekend, they held a ceremony on 6th September, a Thursday night. A day or two before they set up scaffolding so they could treat the statue and make it look buff and shiny. If you go take a look today over the hoarding you will see the figures reflecting muscle definition like a glistening poster boy for a roadside gym.

As they rubbed and buffed the statues, workers made a mess spilling over the travertine plinth.

Here’s the photographic evidence put together by the very capable BugM on twitter. What’s the real story? Owen Bonnici blamed oil spills on little red candles, bunches of flowers and protesters with very evil intent. His employees caused the harm, innocent bystanders got the blame. A truly revolting, anti-democratic act of vile gaslighting.

Owen Bonnici lied about government action that caused admittedly minor damage to a memorial, covering up the responsibility of people under his own authority and therefore his own. He lied exaggerating the extent of the damage. He lied by falsely accusing other people of damage he knew they did not cause.

And he betrayed his responsibilities as Minister for Justice and Minister for Culture by unjustly supressing free thought and free speech.

Here’s a funny one. Remember @OwenBonnici blamed activists for “dirtying” the monument? The photos uploaded by @PL_Malta’s own propaganda outlet here: https://t.co/MkkzavsP53 actually show that the stains are from oil & other chemicals used to “restore” the monument. #liesandspin pic.twitter.com/g7M1pf6VLf

Here you can see that the stains are identical to those spilled by the people maintaining the bronze statues: pic.twitter.com/pUOueUNz6T

Here’s One News claiming the damage was specifically done by the “placing of objects” (ie flowers & candles) https://t.co/dZTgRNEhMy pic.twitter.com/K0SreFkD10

And to add insult to injury, the monument has been closed off for 8 days now purportedly for restoration but no work has been done other than removing banners. Here’s its current state from this afternoon. Again the stains are the same as above from the bronze restoration. pic.twitter.com/lOHWNRWYPd

Here he is again blaming “things placed on the monument”: https://t.co/0vMSHRZzMc
for the very damage that government workers caused.