‘I merely tapped the shoulders of altar boys’ 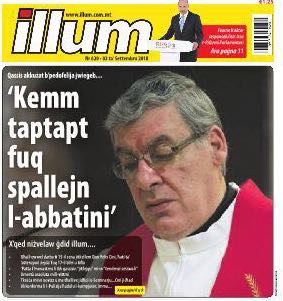 Illum’s front page on Felix Cini, the convicted child abuse priest permitted to say Mass in Bormla “on special occasions” made me angry. Reading the actual report inside the newspaper gives an altogether different impression. The newspaper challenges Felix Cini and his contortionate attempts at self-justification convince no one, least of all the author of the report.

But if Felix Cini could have designed that front page this morning, he could not have done better.

The quotes on that front page are his line of defence. He argues all the child abuse he was convicted to a prison sentence of two and half years for amounted to was ‘tapping on children’s shoulders’.

The title that really irked me most was the one where illum describes its own failures to get victims of Felix Cini to speak to it as “omerta’ assoluta”.

I can only hope this is a misunderstanding of what the term omerta’ means. The 17 people, who were 10 to 14 years old at the time, testified to prosecutors of the abuse they suffered. That is the absolute and complete opposite of omerta’. Omerta’ is the silence of witnesses who collaborate in crime by not revealing it. These witnesses testified to it.

They were never under any obligation to do so because apart from being witnesses they were also victims. But they did.

They are far less under any obligation to answer illum’s answers about what they suffered 15 years ago in their youth now that Felix Cini uses his influence in the press to give front-page interviews in Malta about his innocence.

What people need to understand is this is not some controversy between two people as if they were disputing nuclear proliferation or global warming. We have on one side a convicted abuser who admitted his crimes when faced by 17 witnesses. We have on the other the victims who were hurt when they were “tapped on the shoulder” in the first place when they were talked into testifying to police officers and every time their abuser shows up in his cassock protesting his innocence.

Look at him on that front page in his priestly regalia as if he never confessed to child abuse, was convicted for it, was banned for life from taking care of children, was banned for a while from actually working as a priest, was dispatched to a church institution where they “cure you of homosexuality and other proclivities” and is to this day restricted to saying Mass “on special occasions” only.

There, using his power and contacts, his influence and the priesthood he first used to abuse children, is he again pitying himself and making himself the victims of people who just want to live their lives and forgot what they did nothing to deserve.

I respect illum’s determination to see both sides of any story. It does not stop me being angry though.