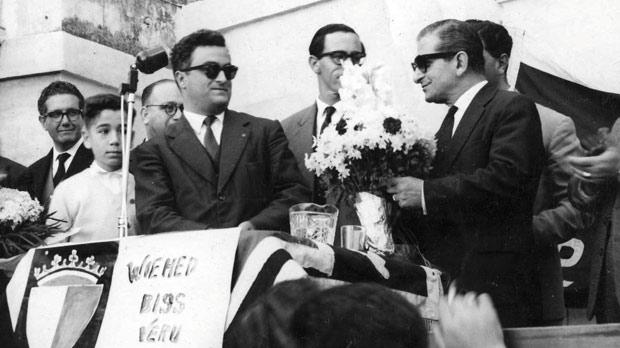 Eddie Fenech Adami will always be a hard act to follow. I realise that sentence sounds like it was written in 2003. We certainly all thought it at the time, no one more so than Lawrence Gonzi I should imagine.

He is now four leaders of the PN ago. A man of his time who challenged the then unassailable Mintoff, reformed the PN into a viable political force and dragged Malta kicking and screaming from under the shadow of the iron curtain and into EU membership.

No one will criticise his successors for not beating the warm, fuzzy feeling the memory of his years gives people who supported him and the reluctant admiration of those who did not.

So when Adrian Delia thought he would compare his own success at leading an opposition party into realistic prospects of government in this interview with timesofmalta.com he set for himself a bar far higher anyone would have imposed on him.

I am not going to scrutinise the whole interview. I’m just picking on this choice quote. Herman Grech is here pointing out to Adrian Delia that he and his party are polling miserably and it looks rather unlikely the PN will be having a good electoral showing any time soon.

Here’s the quick history lesson. The PN had been led by Ġorġ Borg Olivier since 1950. In 1971 the PN lost the election to Dom Mintoff. It did so again in 1976. In 1977 the PN elected Eddie Fenech Adami to replace Ġorġ Borg Olivier as party leader.

A general election was held in 1981. The PN obtained the majority of votes, more than 50% of the voting base. But a quirk in our electoral system and gerrymandering of electoral districts to favour the Labour Party meant that Labour still obtained a majority of Parliamentary seats and took the government.

A political crisis that lasted almost 6 years ensued with tensions running high as Labour clung to power in spite of the fact that it was opposed by a party that had obtained more votes than it did in a general election. There’s no telling where the country would have ended up with a repeat result. But a cross-party compromise to change the rules was made to guarantee the party of two elected to Parliament obtaining a majority of votes enough bonus Parliamentary seats to run a government.

That change was applied in the 1987 election which made Eddie Fenech Adami prime minister.

Now to Adrian Delia who knows all this from memory. What he’s saying in this clip is that it took Eddie Fenech Adami from 1977 to 1987 to get the job of prime minister and, implicitly, the PN should support him — Adrian Delia — for about that time before it should expect him to repeat the feat.

Does anyone think this sort of infantile facetiousness works outside a provincial courtroom?

Let’s rephrase the challenge you set yourself, Dr Delia. Are you expecting to repeat Eddie Fenech Adami’s feat of transforming the party he took over in 1977 into a party supported by more than 50% of the electorate in 1981, 4 years later? You’re about that far from the next general election and today’s rules would make you prime minister if you manage what he did.

So the real question you need to answer is, is there any chance you might do what Eddie Fenech Adami did and is that chance any better than hell freezing over?

There’s something about Adrian Delia’s public interventions that is particularly worrying. Once he makes pronouncements, his office proceeds to rush to brief the press on what he really meant by the remarks. There was the classic case of Sunday’s speech about needing to ‘defend Maltese Christian values’ against the onslaught of foreigners when, according to his handlers, what he really intended to say was that foreigners are welcome and we must ‘plan’ for their arrival.

Adrian Delia’s handlers need to explain his sarcastic remark in this clip from Times of Malta about it “never being anybody’s fault” when Herman Grech says it was not Eddie Fenech Adami’s fault he did not win the government in 1981. The entire narrative of the PN’s history over the last 40 years is turned upside down by Adrian Delia’s response to that. Now, it would appear, we are to believe that Eddie Fenech Adami did not become prime minister in 1981 as a result of his own failure and no one should be making excuses for him.

This may sound like an academic discussion to an outsider: it’s like debating the butterfly ballots in the great Florida recounts of 2000 that elected George W Bush. But the election of 1981 is deep in the founding narrative of the modern PN. Every leader has the right to question and depart from the choices of his predecessors as Adrian Delia does about the ideological frame he says Simon Busuttil was in and disagrees with.

But here we’re burning history. Why? The only reason Maltese history needs to be revised and we are no longer to stand by the broadly accepted view (by now even by Labour sympathisers) that the 1981 result was perverse and gave power to the party that lost the election is that Adrian Delia needs that to survive the electoral disasters that he expects ahead of him.

He needs to compare the general election loss he expects in 4 years time to his interpretation of Eddie Fenech Adami’s supposed loss in 1981, so like him he can survive it and stay in his current job for a further 5 years.

Now, as always, I’ll be told this is spin by apologists who continue to make the superhuman effort of supporting a party leader who is, in baby steps, knocking down the entire political edifice they have functioned in all their lives.

People tell me there’s no way Labour can ever be defeated if the PN remains so weak. That usually comes to me as an admonishment because I’m told I should somehow prop up the PN to help fight the real problem that plagues this country. The PN does not look like it needs my help, or anybody else’s, to harm itself. I am not the Delia who today has torpedoed yet another pillar of its history and its place in the story of the democratisation of Malta.

In one fell swoop, in a casual remark thrown because it sounded like a good argument at the time to parry the journalist’s challenge about Adrian Delia’s abysmal ratings, Eddie Fenech Adami has been transformed from the leading liberator from the darkest days of our modern history into a slow political starter who blamed his electoral loss pretending, falsely, it was not his fault.

Now Adrian Delia’s handlers can rush to tell everyone that’s not what he meant.