UPDATED: Trust me, he pleads. 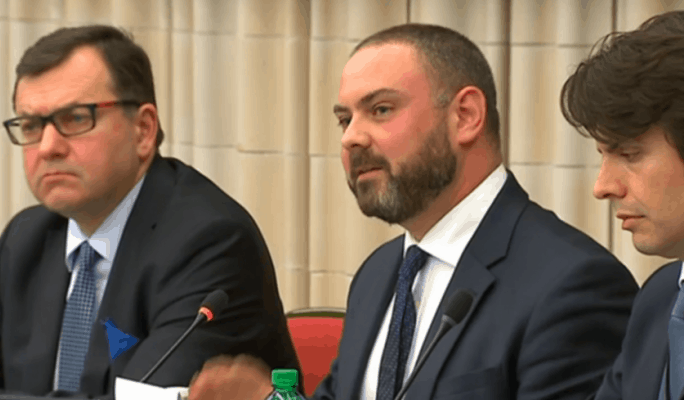 Watching Owen Bonnici and then Matthew Caruana Galizia field questions at the special tax evasion committee of the European Parliament yesterday was a spectacle in contrasts.

I don’t think Owen Bonnici has much hope in reading a favourable review. But boy, that guy is really hopeless. What more obvious tell can there be of confounding self-doubt than his repeated premise for his outlandish claims with “trust me”.

Resorting to homemade patriotism that Owen Bonnici had to be the last line of defence to “defend Malta’s judicial system” is accepting that in the department of Malta’s credibility all is truly lost.

He spoke like a barely literate delegate who drew the shortest straw when the conference of Papuan natives had to choose someone to assure the white people they no longer stew human flesh in big pots. Except on special occasions.

No ‘system’ in the world is perfect. But that line of defence is tired and unconvincing. Moral equivalency — saying that it’s ok because after all, nothing’s perfect — is intellectually and politically lazy. Owen Bonnici sees that castle on the hill and fakes a limp to say he cannot get there.

And to say his government ‘inherited’ the defective judicial system is lazier still.

It wasn’t perfect when he inherited it, but the corrupt, partisan and destructive administration of it with which he was entrusted, exposed its weaknesses and drove it beyond repair.

Not even in the worst excesses of the Mintoff and Mifsud Bonnici regime did people have such poor confidence that they would be served justice, eventually, by our courts.

Most of the damage to our court’s reputation was not the result of the decisions they took. It is that, but only to a limited extent. The bulk of the embarrassment is the product of the fact that the courts can’t act alone to enforce the law. When the other institutions abdicate their responsibilities, the courts’ helplessness is exposed.

And some of the appointees are embarrassingly poorly qualified with the gravitas of inebriated circus clowns while some of the promotees within the judicial ranks are rabid partisans with chips on their shoulders that would look unremarkable in Monument Valley, Utah.

‘Trust me,’ Owen Bonnici pleads to his audience. ‘I trust Malta’s judicial system because I worked in it as a lawyer for many years’. Fair enough. It’s when you stopped working in it and were given the power to administer it or fuck it up that matters became altogether more complicated.

Nothing better represents the shame of all this than Owen Bonnici openly declaring that when he called the Attorney General to get a copy of Magistrate Aaron Bugeja’s Egrant inquiry he was pretending he was not the Justice Minister. He looked in the mirror just before calling Peter Grech and told himself he’s actually Joseph Muscat’s personal attorney. You could see Owen Bonnici speaking to the mirror. ‘You talking to me?’

Matthew Caruana Galizia yesterday reminded us of another excruciatingly and exquisitely tender episode of crassness in Owen Bonnici’s record. That was when he employed Brian Tonna on a full-time salary in his Ministry even as the Panama Papers revealed he set up Panama companies for Konrad Mizzi and Keith Schembri and even as, incredibly, a Magisterial inquiry was launched to investigate fat payments Brian Tonna made into Keith Schembri’s Pilatus Bank accounts. Allegedly those were kickbacks, tangenti, for the sale of passports to Russians. Brian Tonna’s lame defence was that he was repaying his client, against the rules of his profession as an auditor, to settle an interest-free loan covering the costs of his expensive divorce.

Which zooms onto another leap of faith Owen Bonnici yesterday asked his audience on the back of the trust he hopes to enjoy. He said he was only Minister responsible for the sale of passports for one year. But that was long enough, apparently, to know how stringent the sale of passports is and how tight due diligence is to ensure crooks don’t get it.

Did Owen Bonnici then question whether the Russian tycoons who got a passport and allegedly paid Keith Schembri a bribe for the privilege are on the straight and narrow?

But then Owen Bonnici asks to be trusted even as he lies through his teeth. He insists that Malta requires those who acquire Maltese passports to have lived here for a year first. That’s what the law says. But Owen Bonnici lives here. He knows this provision of the law is almost universally ignored.

Recently a journalist asked me how I could be so sure. I pointed out that the press had just figured out 62 Saudi nationals — entire families of oil sheikhs — had just acquired Maltese passports as a group. Sixty-two.

We live here. If 62 family members of Saudi oil sheikhs lived here for a year someone would have seen them. Not to mention some 600 Russian oligarchs who between them drive a huge chunk of Russia’s economy. Did they have board meetings at tas-Serkin every other Sunday while they were waiting for the year of residence to expire before they were granted a passport?

He told his audience we publish the list of people who acquire Maltese citizenship by paying for it. This man, who belongs to the government that alphabetises naturalised Maltese citizens by their first name and shuffles those who pay a million for their passport with those who acquire it through marriage or the recognition of paternity, did not mind lying to his audience to their faces.

Then he asked them to ‘trust’ him.

After he left the stage, Matthew Caruana Galizia took the floor. And we were reminded that though it is no consolation to him, when her assassins dispatched his mother, her strong voice would still be heard years later and that same blush of embarrassment that shone on the faces of the people she exposed during her life, continues to be the fuel that keeps warm this bunch of crooks that have hijacked our country.

Here’s a clip of David Casa’s reaction at the meeting.

Previous:No, wait. So we fire people on the back of allegations now?
Next:Malta nominated Andreina Fenech Farrugia to chair the international body for conservation of tuna