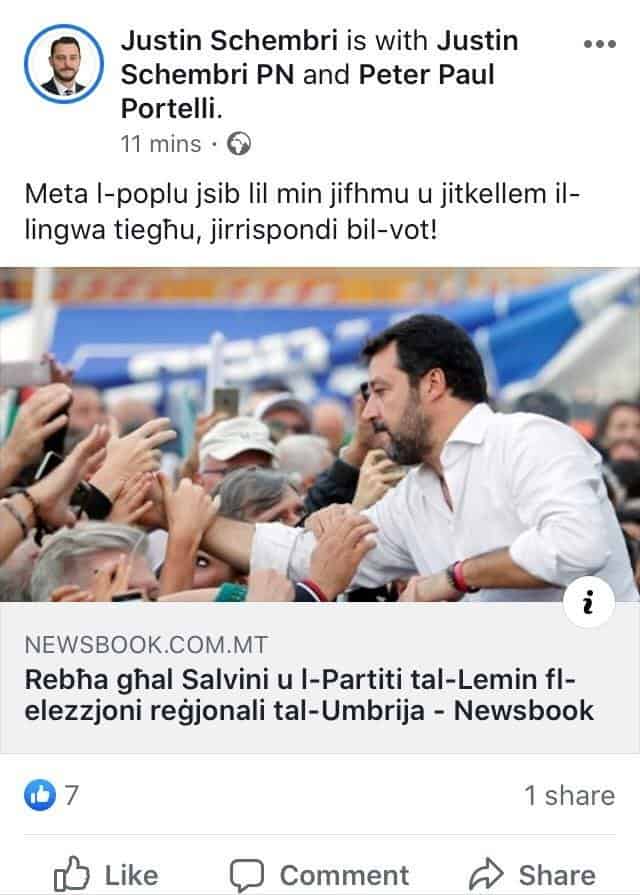 I don’t like Justin Schembri. That’s ok. I imagine the feeling is mutual.

I’ve bashed him before for his Facebook behaviour which he would then try to spin and justify. Today he celebrated Matteo Salvini’s win in Umbria. Although he will probably retract it again, after some half-blinded apparatchik at PN HQ makes him, Justin Schembri clearly considers the Lega and its leader as role models for the PN and for himself.

Again, that’s ok. It means I will not only have to remain away from the party I used to belong to. I now have to fight it. I will stand in the way of racists, bigots, fascists whatever flag they fly and however privately nostalgic I might be for what it used to mean to me.

Justin Schembri is a spokesman of the PN. The party cannot both hold on to him and disassociate itself from him. This was no slip of the tongue. His admiration for Matteo Salvini and for the Lega are not momentary breaks of madness.

If Justin Schembri has his way he would be our own Matteo Salvini or Marine Le Pen or Joerg Meuthen and so on. Given how the PN presents Justin Schembri as a mainstream spokesman on its behalf and how it pushes aside others whom I know within the PN who hold very different views from him, I must conclude that the PN is no longer a tolerant, humanist, Christian-Democratic, party of the centre-left but a bigoted, racist, fascist party of the far-right.

Look, I’m not so self-important as to think the PN needs to fit into my political attitudes. If it happens to marriages, it can happen to political allegiances. I no longer like the party I used to be part of and it’s no longer just the practical matter that the leader that party chose is incapable of winning an election if his electoral rivals were nose-deep in mud and blood.

To my friends in the PN I can only say this. If you don’t publicly denounce Justin Schembri for his open support for Matteo Salvini and his politics you’ll be trying to remain neutral on a moving train. This is not about keeping the peace. You cannot keep the peace with someone whose politics brings into very question the anti-fascist good sense of PN politics of the last 70 years. Silence in the face of that serves its interest and is an alliance with it.

And therefore, my friends, I’d have to fight you too.