To Evarist Bartolo: Stop half way and it would have been better if you did not start at all 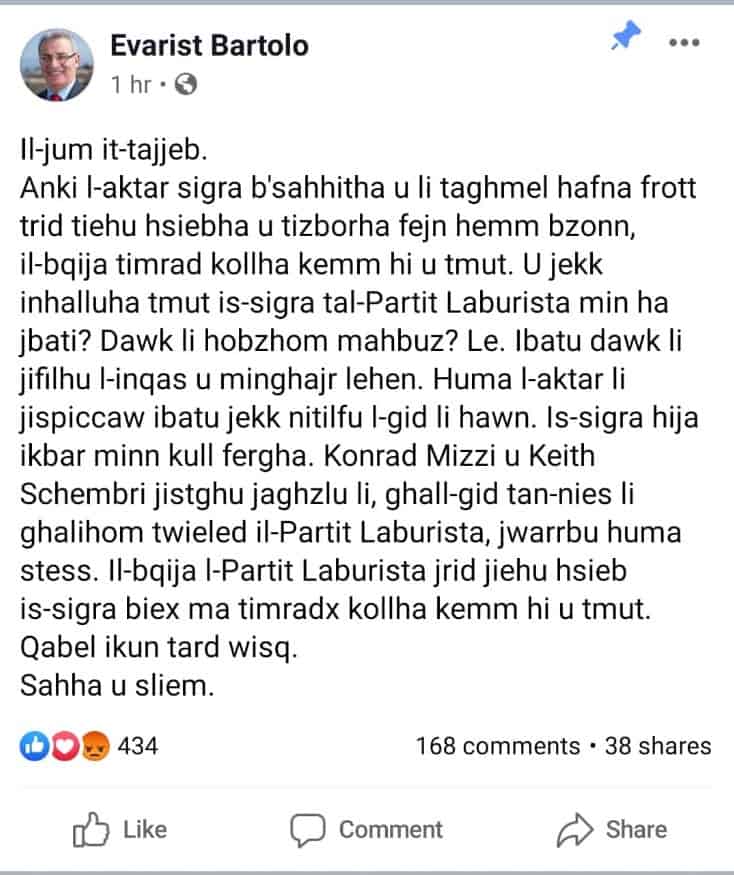 Let’s not say that now.

I will say though that if Evarist Bartolo and the rest of the Labour Party group do not learn from the mistake they made every day of the last three years, they’ll have done a great disservice to the business of politics in Malta and to the country itself.

Chris Cardona’s story that he was asked over for a tea at police headquarters last Saturday and now everything is honky dory is clearly rubbish. If the police did not feel confident about the questions they wanted to ask they would have visited him discreetly at home. Calling him to police headquarters in broad daylight was not some clumsy accident.

Imagine how you would feel if you were called to police headquarters to answer questions about a murder you had nothing to do with. I think calm won’t come into it.

The police are clearly not quite satisfied with Chris Cardona’s answers from Saturday. They wanted to have some more interviews with a staffer, or more yesterday. The details are sketchy. Joseph Muscat, the police’s official spokesman, has not addressed the issue in public statements yet.

All of these circumstances are shades of severity of one fundamental fact: the police are not satisfied with the explanations a cabinet minister gave them about his possible involvement in a murder.

And Evarist Bartolo does not think that now would be a good time for Chris Cardona to leave the government?

And then, of course, there’s Joseph Muscat. Just because Konrad Mizzi and Keith Schembri might no longer remain in their office, does not mean that the decisions the prime minister needs to take become easier and his ability and willingness to intervene in the investigations become unimportant.

Joseph Muscat remains invested in saving and exonerating Keith Schembri and Konrad Mizzi. His legacy depends on it. And, if that’s what he’s looking for, his political survival. And, one cannot help suspect, he may also be invested in the deal with the Azeris, with the Fenechs, the Gasans and the Apap Bolognas and he is therefore under some obligation to make sure not only the truth does not emerge but the deal is not lost.

The need to remove Joseph Muscat does not change.

And then Evarist Bartolo should also be thinking about doing the right thing and giving out a signal that some expectation of standards of behaviour from our politicians is not unreasonable.

He kept them there for three years as we learnt more and more about what they did.

Consider how Chris Cardona fought tooth and nail to cover up evidence he used a brothel on government time all the while he was financially eviscerating the journalist that uncovered him. Consider how he needed to fight back reports he met the assassins that have been charged with killing Daphne. Consider how he denied and later retracted not having known them.

Joseph Muscat should have fired him many times in that period.

And then of course consider what has become clear to everyone, including Evarist Bartolo’s supporters: that Daphne’s murder happened to cover up Keith Schembri’s and Konrad Mizzi’s corruption which we’ve known about for so long.

Joseph Muscat should have fired them many times in that period.

If Evarist Bartolo and the others do not fire Joseph Muscat now, they perpetuate his greatest crime: the institutionalisation of impunity. Evarist Bartolo speaks of pruning the Labour Party tree. This should not be his first concern right now. His first concern should be the damage done to this country by a prime minister covering up crimes like corruption, maybe even murder.

Evarist Bartolo need only look at today’s Times of Malta to understand what that impunity engenders. Keith Schembri and Konrad Mizzi are asked to comment on the present situation. Keith Schembri, chief of staff of the prime minister, ignores the questions not even deigning to reply to the explicit suggestion Daphne was killed to cover up the bribes he was cashing.

Konrad Mizzi replies, haughtily and indignantly, insisting that by resigning the Deputy Leadership of the Labour Party he paid all the price he needed to pay and his re-election to Parliament in 2017 absolved him of all sins. The rest, he says, is just the hateful nationalists throwing aspersions at him. He says it like he believes it. Like Robert Musumeci does when he argues that since Labour won the election in 2017 it has five years in which all its crimes – corruption, murder, anything you please – are forgiven by the legitimacy of popular support. That, he dares to call it, is the rule of law.

If the Labour Parliamentary group is doing a half-arsed job of fixing this situation, their failure to address the real problem here will have worse consequences than doing nothing at all.

Tonight, we’re gathering outside parliament to remind them what the country needs right now: Joseph Muscat out.

Previous:GUEST POST: I will not settle for anything less
Next:When he clung to Keith Schembri