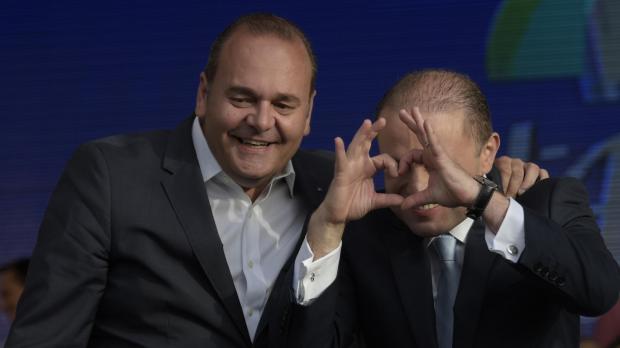 There’s nothing we want more right now than to see justice served. But while this spectacle of a collapse plays out before our eyes and we’re all absorbed by this catastrophe can someone answer one simple question: who’s running the country please?

If an investor wants a chat with the minister does he call Chris Cardona? Will a government minister fielding questions by the police investigating a murder of someone he most publicly hated have any mind for any of that?

If a sudden oil price hike were to hit Air Malta would Konrad Mizzi have the focus to deal with that?

Is any one of them even half aware of what they should be doing?

There are three groups in cabinet right now. The first group are the confused. They thought they were in for a good thing. They saw in the Labour Party and Joseph Muscat’s government a way to do some good and be remembered for something they’ve done. But they can feel the heat of the fire that is consuming them and are frankly keen for the end now because they can imagine no life without Joseph the Great.

The second is on the wings, smelling the blood, waiting to take over.

The third group are the scared. They are led by Joseph Muscat. He is positively petrified. When he’s very scared he blabbers nervously, delivering those car crashes of stand-uppers he’s been having these past four days in the internal staircase of Castille which is usually used for diplomats from rogue countries Malta wishes to insult.

A minister of his, Chris Cardona, got called into police headquarters for a chat with the cops. No reassuring press statements by Joseph Muscat, our very own midnight cowboy. Instead we got a statement by Chris Cardona’s ministry assuring us there was nothing untoward in the minister being called to police headquarters while they’re investigating a political assassination.

Can anything be more representative of the capture of our state than an official ministry press release explaining why the minister was called up to police headquarters to answers questions in a murder inquiry?

The ministry is not Chris Cardona’s. He’s put there to run it but he runs it on our behalf. The ministry is ours. If it’s issuing statements on Saturday afternoons it should be about some investor choosing Malta to set up a business that employs 3,000 people. Any less and the statement can wait till Monday.

Ministry statements that explain there’s no suggestion the minister has actually killed someone or been part of the conspiracy that killed someone is so completely beyond belief. Such a thing would have been too much in China.

To say here nobody resigns is such an understatement now. Here not even ministers questioned about a murder resign. And they can’t even be arsed to pay their own lawyer to make a statement on their own personal behalf. They’re so bloody imperialist that they get our ministry to do so using our own office, our own laptop and our own email account.

There’s not much else Joseph Muscat can say. He said a couple of days ago that “so far” no politician has been named in the murder inquiry. It’s starting to feel that the myth of infallibility and the certainty of final victory is starting to fall from his eyes as well.

He’s like Hitler in the bunker now within earshot of the Russian artillery just outside. His big manoeuvres and last-minute twists, his threats of final relief when he takes the stones out of his shoes, are a fantasy he no longer believes in.

There are a lot of reasons for this.

The loyalty of those around him is falling silent. Sure, there are the little Martin Bormanns and Owen Bonnicis who are dead inside anyway and are relishing the opportunity to crash and burn with their leader. There are the grandiloquent Joseph Goebbels and Robert Musumecis who will persist in the tragically comical rhetoric of a false reality.

But there are the Albert Speers and the Chris Fearnes too. They are now quietly disobeying the leader’s orders and are starting to brief against him. They are smelling the blood and are bringing out all the goodwill they accumulated over time by keeping their distance and their unenthusiastic applause. For every good Nazi there’s a good minister looking to outlive Joseph Muscat.

Someone with an ear of the Labour side told me the silence around the great leader is deafening. The fervent and hysterical hero worship is fading, the aura is faltering. Labourites are openly qualifying their commitment distinguishing for the first time since Alfred Sant loyalty to party from loyalty to leader. The distinction has been long forgotten. Remembering it is uncomfortable territory.

Is this how we want to be governed?

Is this what keeps Joseph Muscat up at night? And if it is who is thinking about the problems in our banking sector, the slow-down in investment, the shudders in the gaming industry, the threat to construction and the reputational damage already sustained by our financial services industry?

And that’s just the negative things. We also need to think positive as they often reminded us. Look at Joseph Muscat. Have you given him a close look lately? Does he look like he has a mind to imagine our economy five years from now so he can go tell cabinet on Monday what he needs them to do to achieve it?

I don’t think so. I think all he can think of is the moment when one of his ministers ends up in handcuffs. For that, surely even he must realise, must be his last day in politics.

The Russians are practically upstairs, great leader. Can we start rebuilding our country from the catastrophe you’ve brought it to now please?