GUEST POST: How to walk into a brick wall 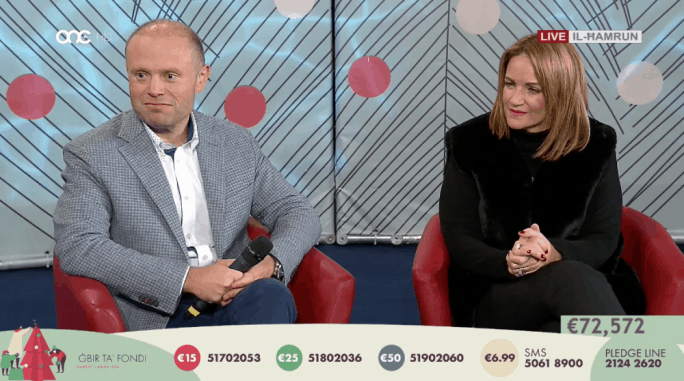 When you find a disgraced Joseph Muscat and his wife on television carrying on as if they were the only victims of some recent act of God working in tandem with a hostile media, it’s then that you know that these are strange times. They sit before the Super One cameras talking in riddles and hyperbole to try and detach themselves from the disaster they have created and we sit in front of this spectacle and think of all the questions we would like to ask this self-indulging Charles and Camilla.

“We are paying for somebody else’s wrongdoings” is their sell out farewell message. Well, let us see.

So who personally authorised the payment of 4.3 million in public funds to a defaulting tenant of the Café Premier who was just about to be judicially evicted anyway? Who was the Minister for Lands when the Gaffarena swindle was organised? Who gave away Żonqor Point to a Jordanian mogul on the basis of a five minute introduction and discussion thinking that establishing a university was as easy as opening a coffee shop? It was you.

Were you behind the scandalous Sai Mizzi fake overseas posting? Whose idea was that? Were you told about it beforehand? No, you were dead against it. So what skeleton in the cupboard forced you to defend it?

Who appointed Konrad Mizzi as your representative to enter into fuel contracts with Baku and return with a loss of 14 million euro to the nation? Who ignored Konrad’s proven lack of negotiation skills and sent him to fix a deal with a Canadian fraudster front man for faceless foreigners which gave them 50 million in public funds annually to upgrade and operate three public hospitals? Do we need to also mention the ITS public land deal traded off with a 200 million discount? Do we need to ask you also about the Electrogas fraudulent 40 million mark-up purchase of LNG from Socar rather than buying directly from Shell?

Whose wrong advice did you follow when in February 2016 you discovered that the same Konrad Mizzi had set up his obvious money laundering Panama company? What forced you to lie about having known about it ten days before? What forced you to act as if you were incapable of moving against him and your Chief of Staff? Was it anything to do with Egrant? Or are we to believe you are an idiot and don’t know how to add up two and two?

What did you do when you found out that these two same persons of mistrust had actually been arranging to receive 150,000 a month from an anonymous source in Dubai? And why did you still refuse to act when the source became known to be none other than an Electrogas co-owner with whom you yourself would communicate with on a friendly regular basis? Were you warming your feet on the same fire?

Why did you call an early election in 2017? You never gave us a plausible reason. You told us that your Chief of Staff was a man of integrity. Do men of integrity tip off murderers in your experience?

Did you know that two or more of your staff were in direct contact with a Melvin Theuma and that your man of integrity Schembri for no fathomable public requirement had arranged for his fake employment with government?

And after the assassination event, why did you have your Chief of Staff accompany you into the Security Services meetings? When did you both find out that Yorgen Fenech was for the police a person of interest? In November 2018, did you make an urgent call to the Police Minister to shut up about having found the masterminds?

Were you aware that Schembri and Fenech besides being connected by 17 Black kickbacks were also as thick as thieves, like “brothers”? Did you make a conscious decision to ignore the most obvious suspicion that your man of integrity, sitting by your elbow almost every waking moment might also be a person of interest in a political assassination?

How did you manage to stop your backbench from rebelling against your flagrant omissions of duty to the nation? Did you do it by giving them a second salary under the guise of some fake appointment with car and driver, or by handing out generous six figure consultancies?

Why did you act alone in giving the middleman a conditional pardon? Did you discuss this with Schembri at the time? Why then did you revert to cabinet on the Yorgen Fenech pardon issue? What was so different?

Why did Robert Abela fear for his life during that seven hour emergency cabinet meeting? Who do you think tried to frame Cardona for the assassination? Is it true that the meeting turned against you and that you bargained a deal that you could stay on till the 12th January to give you the chance to orchestrate a royal tour of the kingdom you betrayed so majestically?

Why the four hour sleepover that Monday night before Schembri resigned? Had the clock finally caught up with your mutual defence agreement? Is that when both of you realised that you had outplayed your hand and that the game was up? What arrangements were agreed that night?

I guess that you will never answer any of the above. You will sit on the backbench as a simple sailor. But you will always be Malta’s Captain Schettino – totally responsible for the neo-liberal rudderless shipwreck of the country that took place under your watch.

It would be better if you left politics all together and joined the Henley & Partners sales team on a full time basis. And the sooner you do, the better.