The small band that captured the country 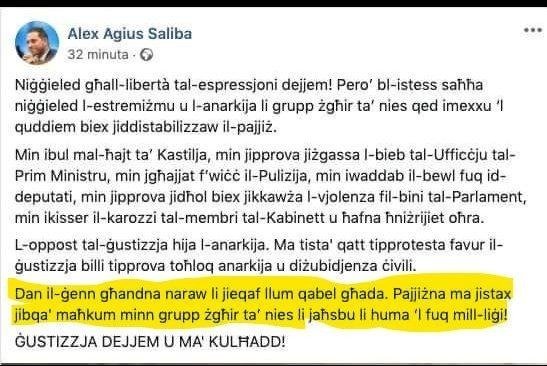 This post by Labour MEP Alex Agius Saliba is full of lies. The view that Joseph Muscat should resign immediately is not extremist given his office and his staffers have been named in a murder investigation. Civil disobedience is the opposite of anarchy. It is an escalation of protest in defence of the State not in opposition to it as it acts to demand from officials of the State compliance with constitutional and democratic principles. Protesters are not destabilising the country. The country is unstable as it is, shaken by the discovery that we live in a country where its government could dispatch someone to kill you if it dislikes you enough, or if someone else does it the government will help them get away with it. The trust between citizens and their government has been horribly betrayed.

No one pissed against the wall in Castille. Though if anyone has done that would not have been the worst thing to have happened within its walls. Within its walls Melvin Theuma was received for coffee and a selfie by the prime minister’s chief of staff the week he was commissioned to arrange for the murder of a journalist. If Keith Schembri pissed against the wall of his own office we would not necessarily be demanding Joseph Muscat’s resignation.

No one tried to break into Castille. But reporters were blocked out of a protest and were prevented from reporting it. Though I did not conduct an investigation into this, I am quite certain no one threw piss at MPs. The claim was made randomly by people who did nothing to substantiate it. No one tried to enter parliament to commit violence. Visiting the stranger’s gallery is a perfectly ordinary matter and since the people refused entry were not found with weapons or anything that could have caused any harm to anyone the accusation that they intended to commit violence is violent and intimidatory in itself.

No one “broke” ministers’ cars. They’re still driving around in them apparently the only ones having a Christmas this year.

Alex Agius Saliba concludes as follows: “We must see to it that this madness stops sooner rather than later. Our country cannot exist in the grip of a small group of people that think they’re above the law”. Quite right, Alex Agius Saliba. Perhaps you can discuss that with Joseph Muscat and tell him to eff off pronto.