We’re not going to rain on Friday’s parade. But the greedy, the corrupt, the complicit and the inept need to feel the heat.

It doesn’t really need much explaining. Look at this screenshot of Neville Gafà reacting to a post by Simon Busuttil saying the formal Republic Day ceremonies keep up the false pretence that we do not have a massive constitutional crisis around us. 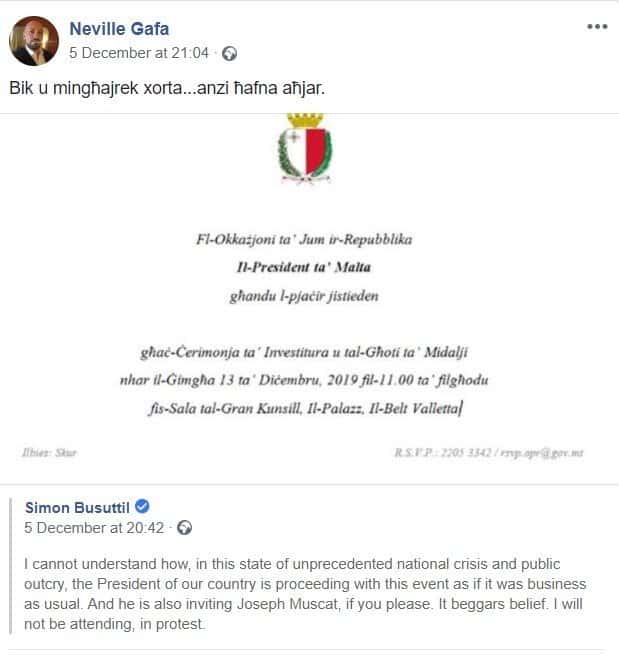 Neville Gafà just wants to party. For him nothing’s changed. He still ferries to and from Keith Schembri’s office which has now been relocated to Mellieħa, quite likely perpetrating the continued covering up of very serious crimes.

The fact is we appreciate the military parade on Republic Day is an important occasion for soldiers and their families. It’s an important day for all of us. The trappings and symbolism of Republic Day events are symbolic of the constitutional bonds that keep us together. Few things are more important to us.

Incidentally we also appreciate Republic Day is for many people Christmas shopping day. We have children too.

We’re not trying to scupper anyone’s parade here. But in the current circumstances we must be a physical and perceptible component of Republic Day. We must fight against those who have transformed our institutions into a pirate bay for their crimes.

Precisely out of our commitment to the republic that we must be present on the streets in Valletta on Friday morning.

Organisers of Friday’s protest met the police at their headquarters this morning. We emphasised we are calling for the public’s peaceful participation in the public events in Valletta and asking the public to bring banners, posters and whistles to carry their message across.

This is in no way a protest against law enforcement authorities that on the day will be fulfilling their duties. Protest organisers appreciate the need of public order. The police today told us they agree that our call for people to join us in protest on Friday is well within our free expression rights protected in the law.

The organisers reiterated in a statement that the best way to celebrate Republic Day is to peacefully defend the republic from the criminal web that captured our institutions.

In the present circumstances it is altogether correct, it is indeed our duty, to address our message of protest to those who have the power and the duty to take us out of the mess Joseph Muscat put us in: the president and members of parliament.

I would also add that as much as soldiers and police officers on duty on Friday are not the subjects of this protest, their horses (which they traditionally use at these events) are also entirely innocent of all that’s going on. The horses will probably not understand the whistles and the shouting. So, when the horses pass by, we’ll have the posters speak for us.

Previous:Justice for Journalists: London conference on Justice for Daphne
Next:Is this supposed to clear Keith Schembri?